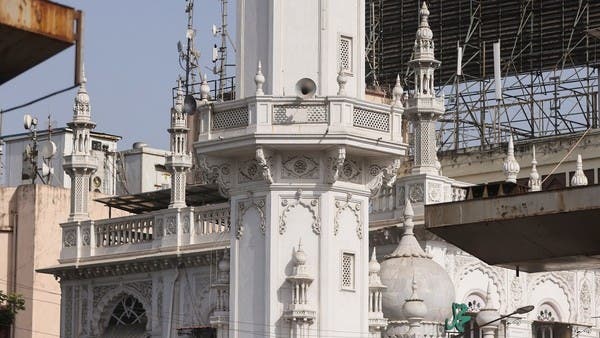 Sitting in an office full of books overlooking a gigantic prayer hall, Mohammed Ashfaq Kazi, the chief preacher of the largest mosque in Mumbai, checked a decibel meter mounted on the loudspeakers before issuing the call to worship.

“The volume of our azaan (call to prayer) has become a political issue, but I don’t want it to take a common turn,” said Kazi, one of the most influential Islamic scholars in the sprawling metropolis on India’s west coast.

As he spoke, he pointed to loudspeakers attached to the minarets of the ornate, sand-colored Juma Masjid in Mumbai’s old commercial districts.

Kazi and three other senior clerics from Maharashtra, where Mumbai is located, said more than 900 mosques in the west of the
The state had agreed to lower the volume of calls to prayer following complaints from a local Hindu politician.

Raj Thackeray, leader of a regional Hindu party, demanded in April that mosques and other places of worship remain within sound limits. If they didn’t, he said his followers would chant Hindu prayers outside mosques in protest.

Thackeray, whose party has only one seat in the 288-member state assembly, said he only insisted that court rulings on noise levels be observed.

“If religion is a private matter, why are Muslims allowed to use loudspeakers all 365 days (of the year)?”

Thackeray told reporters in Mumbai, the financial center of India and the capital of Maharashtra.

“My dear Hindu brothers, sisters and mothers come together; being one in taking these speakers down,” he said.

Leaders of India’s 200 million Muslims see the move, which coincided with the holy festival of Eid, as another attempt by hardline Hindus to undermine their right to free worship and religious expression, with the tacit approval of ruling Hindu nationalist Bharatiya Janata Party (BJP).

In recent weeks, a senior BJP leader began pushing for the swapping of religion-based marriage and inheritance law with a unified civil code, targeting rules that would allow Muslim men, for example, to have four wives.

The BJP did not respond to a request for comment on Thackeray’s initiative. It denies targeting minorities and says it wants progressive change that benefits all Indians.

At the Juma Masjid, Kazi said he complied with Thackeray’s demands to reduce the risk of violence between Muslims.
and Hindus.

Bloody clashes have erupted sporadically across India since independence, most recently in 2020, when dozens of people, mostly Muslims, were killed in Delhi following protests against a citizenship law that Muslims believe discriminated against them.

While tough Hindu leaders tried to undermine Islam, Kazi said: “We (Muslims) must be calm and
peace.”

Senior police officials met with religious leaders, including Kazie, earlier this month to ensure microphones were turned down, such as:
they feared clashes in Maharashtra, which is home to more than 10 million Muslims and 70 million Hindus.

Police filed a criminal case against two men in Mumbai on Saturday for using loudspeakers to recite the azaan in the early morning.
and warned workers from Thackeray’s party to gather around mosques.

“Under no circumstances will we allow anyone to create communal tensions in the state and be the order of the court”
respected,” said VN Patil, a senior police officer in Mumbai.

A senior official from Thackeray’s party said the initiative was not intended to single out Muslims, but to reduce “noise pollution” caused by all places of worship.

“Our party does not appease the minority community,” Kirtikumar Shinde said, adding that the police had warned against
20,000 partygoers this month.

The issue of calls to prayer extends beyond Maharashtra. BJP politicians in three states have asked local police to remove or restrict the use of loudspeakers in places of worship.

The deputy chief minister of the country’s most populous state, Uttar Pradesh, said more than 60,000 unauthorized speakers
removed from mosques and temples.