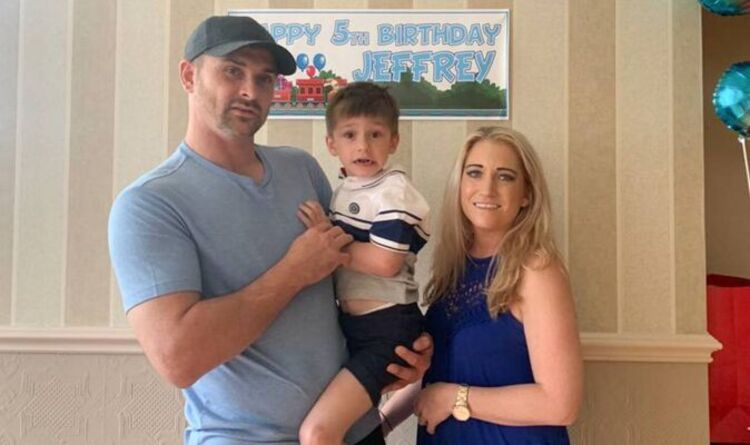 Sheryl Lawson, 35, was devastated when her little boy Jeffrey Charlesworth was diagnosed with rare Battens disease, an incurable life-limiting condition with symptoms including dementia, blindness, loss of speech and movement.

Now Sheryl and her fiancée Andy Charlesworth, 35, of Accrington, Lancs, are determined to maximise the memories they can make with Jeffrey before he suffers anticipated memory loss.

Resource planning coordinator Sheryl explained: “We tried to make his fifth birthday the best that it could be.”

“We ended up having a party at a local golf club, we had loads of his friends and school friends, just to get everyone to see him.”

“One of our neighbors knew someone who has loads of vintage cars, so they brought them all over for him to play in, which was amazing. Jeffrey had a ball.”

“We know we need to make the most of making memories while he’s able to enjoy them.”

Sheryl has also organized for Jeffrey to go to Drayton Manor theme park, as he’s a huge Thomas the Tank Engine fan, and hopes to take him to Disneyland soon.

She said: “He absolutely loved it. He loved all the rollercoasters; it was all just pure excitement.

“Last Christmas we went to Lapland to see Santa, which he absolutely loved.”

One of the symptoms of Battens disease is what is commonly described as ‘childhood dementia’ which affects memory recall for youngsters.

Sheryl said: “We didn’t know children could get dementia, it’s not something you associate with children. He’ll also end up with that, but at the moment his memory is more or less holding on.

“He still knows who I am, and who my sister is, and my mum, he gets so excited when he sees them walk in.

“He’s deteriorated in terms of knowing colors and things, but we’re hoping he’ll be able to regain them after treatment. He hasn’t said mummy in quite a while, but I heard him say it the other day, clear as day.”

Like many children with Battens disease, Jeffrey did not show any symptoms until he was aged two when his speech started lagging.

Sheryl added: “When he was three he had his first seizure, and then after that he was diagnosed with epilepsy. At start of 2021 his mobility just got worse and worse, and they did a blood test to go to Great Ormond’s Street.

Sheryl said the Battens diagnosis felt like her world was turning upside down.

She said: “We got a call to go into hospital the next day to talk about the results. When we got there they told us he had Battens disease and there was no cure.

“They sent us home with a leaflet, and when I read that the life expectancy is 6-12 years I just broke down.”

Ongoing treatment to slow down the disease involves brain ‘infusions’ and expensive fortnightly trips to London, prompting the family to ask strangers to donate to help them cover medical expenses and travel costs.

She said: “He was eligible for this treatment so he had a brain operation to put a port into his head.

“Now we go down to Great Ormond Street Hospital every fortnight for him to have a brain infusion, and hopefully after six to 12 months his symptoms will level out, but it won’t stop the blindness.

“At the moment, he’s lost his mobility he can’t walk on his own or stand unaided, and he wants to run but he can’t.”