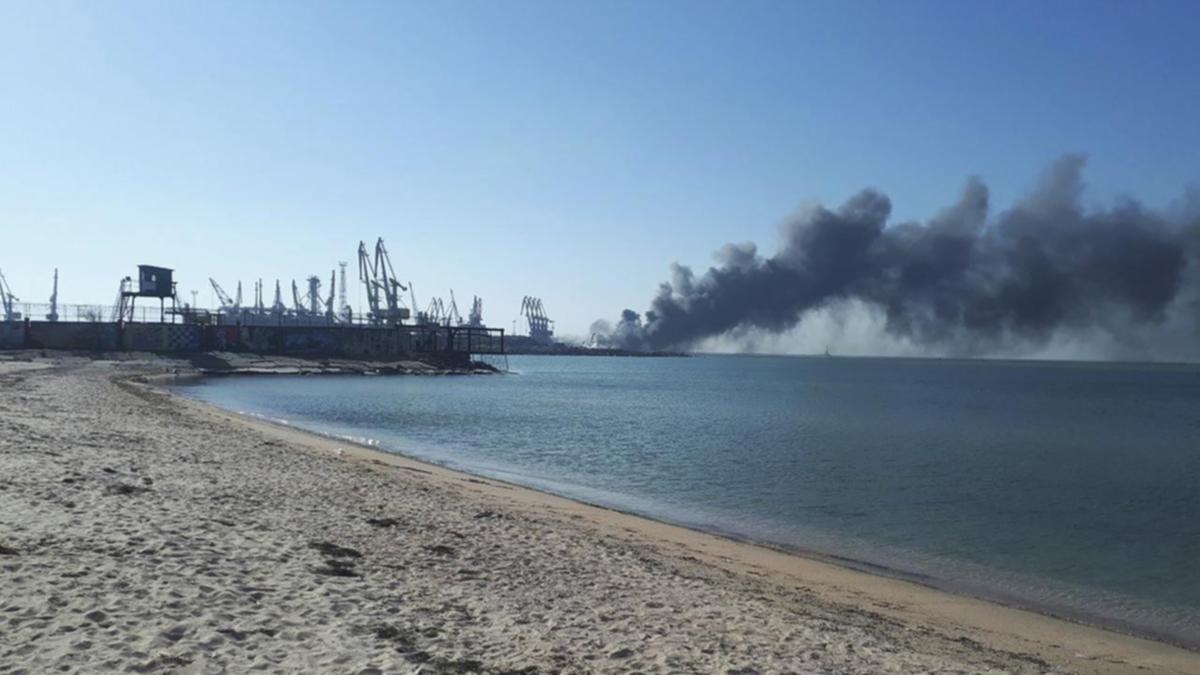 Ukraine says it has destroyed a large Russian landing support ship, the Orsk, at the Russian-occupied port of Berdiansk on the Sea of ​​Azov as NATO leaders meeting in Brussels agreed to strengthen the alliance’s forces in eastern Europe.

Video footage, which Reuters was able to confirm was filmed from inside Berdiansk, showed a column of smoke rising from a blaze at a dock and the flash of an explosion.

Two vessels, one of which appeared to have been damaged, were seen in the footage sailing out of the dock as a third ship burned.

Reuters could not confirm if it was the Orsk on fire in the film.

Russian officials did not immediately respond to requests for comment on the report that the support ship had been destroyed.

Russia said on Monday the ship had docked at Berdiansk, 70km southwest of the besieged port city of Mariupol, and the website of the Russian armed forces news outlet Zvezda underlined the port’s importance to Russian supply lines.

The ship was capable of carrying 45 armored personnel carriers and 400 people, she said.

As part of what Russia calls a “special military operation” launched almost a month ago, Russian forces have seized most of the Ukrainian coast along the Sea of ​​Azov except for Mariupol, which has refused to surrender.

“It doesn’t matter what kind of forces and means these losses were inflicted on the enemy – we can definitely say that this operation was successful,” Ukrainian Defense Ministry spokesman Oleksander Motuzyanyk said.

At an unprecedented summit of the NATO military alliance, G7 members and European leaders to address the continent’s biggest military crisis since the 1990s Balkans wars, new battle groups were announced for four eastern European countries.

The US and UK expanded sanctions blacklists, various countries announced new military and humanitarian aid as well as promises to take in refugees and the European Union was set to unveil steps to wean itself off Russian energy.

NATO, which has already beefed up its eastern flank to 40,000 troops spread from the Baltic to the Black Sea, agreed on Thursday to set up new combat units in Bulgaria, Romania, Hungary and Slovakia.

“We must ensure that the decision to invade a sovereign independent country is understood to be a strategic failure that carries with it ruinous costs for Putin and Russia,” Canadian Prime Minister Justin Trudeau told the EU parliament.

Still, the pledges stopped short of President Volodymyr Zelenskiy’s calls for a full boycott of Russian energy and a no-fly zone over Ukraine.

Thousands of people have been killed, millions made refugees and cities pulverized since Russian leader Vladimir Putin ordered the invasion on February 24.

More than 3.6 million people have fled Ukraine since the invasion began, according to the United Nations.

In a month of fighting, Ukraine has fended off what many analysts had anticipated would be a quick Russian victory.

So far, Russia has failed to capture any major city.

Its armored columns have barely moved in weeks, stalled at the gates of the capital Kyiv and besieging cities in the east.

They have taken heavy casualties and are low on supplies.

Ukrainian officials say they are now shifting onto the offensive and have pushed back Russian forces, including north of Kyiv.

As US President Joe Biden rallied allies on his first trip aboard since the war began, the US announced new sanctions against Russia, $US1 billion ($A1.3 billion) more in humanitarian aid for Ukraine and an offer to take in 100,000 refugees.

The Kremlin said NATO suffered from a “hysterical and inadequate” understanding of what is going on in Ukraine.

In the Russian-held part of Mariupol, trucks arrived with food supplies in cardboard boxes bearing the “Z” logo that has become the Russian symbol of its “special operation”.

Angelina, a young mother-of-two, said she had received bread, nappies and baby food.

“It’s difficult to leave by bus now. We hope the number of people trying to get out will go down and it will get easier for us to leave,” she said.