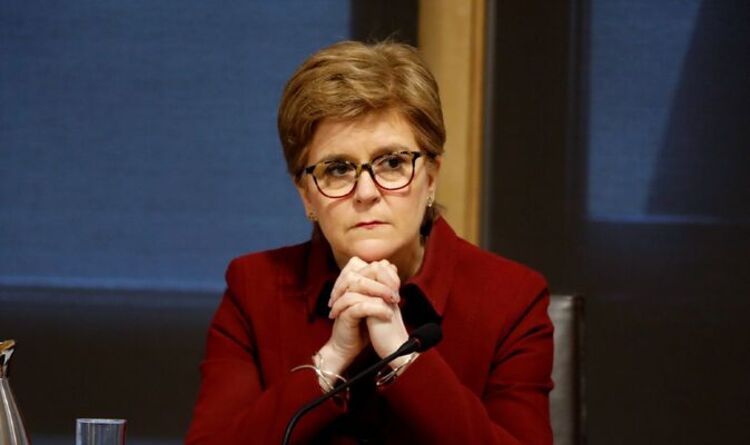 Throughout the pandemic, Scotland’s First Minister has been giving Covid briefings in front of a blue saltire printed onto a white background. The flag is the reverse of Scotland’s St Andrew’s Cross. But Ms Sturgeon has been forced to abandon the imagery after Putin’s invasion of Ukraine, as it was almost identical to the Russian Naval flag.

The Scottish Government confirmed that the flag had been removed in the wake of Vladimir Putin’s invasion of Ukraine, which began last Thursday.

A spokesperson for the government told The Times: “The white with blue Saltire version of the Scottish Government logo is part of the organisation’s approved branding toolkit.

“Given the situation in Ukraine the Scottish Government will no longer be using this version of the logo for media briefings.”

A spokesperson for the Scottish Conservatives said that continued use of the flag would have been “an entirely inappropriate scenario”.

They said: “This is the right decision.

“They have narrowly avoided an embarrassing situation where the Russian naval flag would have been flown at Scottish Government briefings.

“That would have been an entirely inappropriate scenario given the appalling actions by Vladimir Putin, so we’re pleased to hear that this logo won’t see the light of day any longer.”

This comes as Russia has been ostracised by world leaders amid bitter fighting in Ukraine, after Putin declared war on the country a week ago.

Ms Truss acknowledged the conflict “could end up lasting months and years”, saying the UK was “prepared to suffer economic sacrifices” in order to support Ukraine.

The Russian leader has been accused of war crimes, with the UN reporting that at least 406 civilians have been hurt or killed in the conflict so far.

Cluster munitions have reportedly been used in the bombing of Kharkiv, which qualifies as a war crime when used on civilians.

The weapons scatter smaller munitions or bomblets over a wide area, increasing the potential for indiscriminate casualties and damage.

The Russian army has also been accused of war crimes by Ukrainian leaders in their bombing of a nursery.

Ukrainian Foreign Minister Dmytro Kuleba confirmed that he would be providing evidence to the International Court of Justice, saying: “Today’s Russian attacks on a kindergarten and an orphanage are war crimes and violations of the Rome Statute.

“Together with the General Prosecutor’s Office we are collecting this and other facts, which we will immediately send to the Hague.