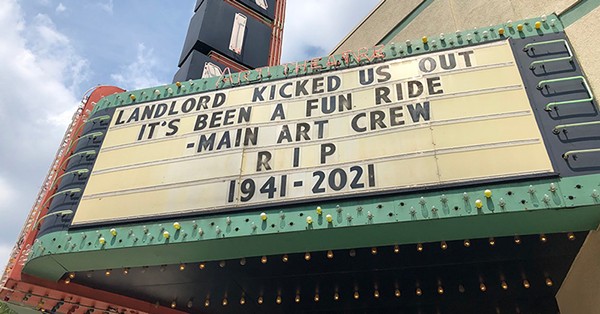 Royal Oak’s Main Art Theater left a hole in the hearts of film enthusiasts when it closed abruptly in April 2021. Where else could freaks and geeks gather for midnight showings of cult classics on the big screen?

Well, now there is a grassroots organization that’s dedicated to getting the longstanding theater re-opened. Friends of Main Art is a non-profit that’s hoping to support their favorite theatre’s reopening through fundraising and grant funding. On Thursday, March 10, the group will host a benefit screening of Wes Anderson’s The Grand Budapest Hotel at the Royal Oak Farmers Market.

“For 80 years, and especially the last 30 years, the Main Art Theater has really brought people around the Metro Detroit film community together,” says Jason Krzysiak, president of the Friends of the Main Art. “As far as cultural importance goes, there really isn’t any other institution in Oakland County that I believe has been as beloved and important.”

While admission to the movie screening is technically free, movie-goers can make a donation to the cause through an Eventbrite page.

The theatre’s unfortunate end was announced in June of last year over the marquee, which read, “Landlord kicked us out. It’s been a fun ride. … RIP 1941-2021.”

According to Krzysiak, it wasn’t actually the landlord’s fault. It was Landmark Theatres, a company that operated several independent theaters across the US and Canada including the Main Art, that terminated the lease.

Friends of the Main Art doesn’t just want the theater to reopen, they want it to be community-run, which is why they applied for 501(c)(3) status. Krzysiak says the group has professional grant writers on deck who will help them start applying for local, state, and federal funding.

“We would be running it and preserving it instead of a big company like Landmark,” he says. “Our mission is to bring these independent cinema experiences back to Royal Oak within the community that covets them. Our model requires volunteers, donations, partnerships with sponsors, grants, and funding. We would have a board of directors and membership from people within the community.”

at The Grand Budapest Hotel screening next week, attendees are encouraged to dress up as their favorite character from the movie. The evening will also include trivia games to accompany the film with t-shirts and snacks available for purchase.

“This exactly the kind of movie you’d see at the Main Art,” Krzysiak says. “It’s a little bit quirky and you’re not gonna see it at the multiplexes — the types of film you really have to search for.”