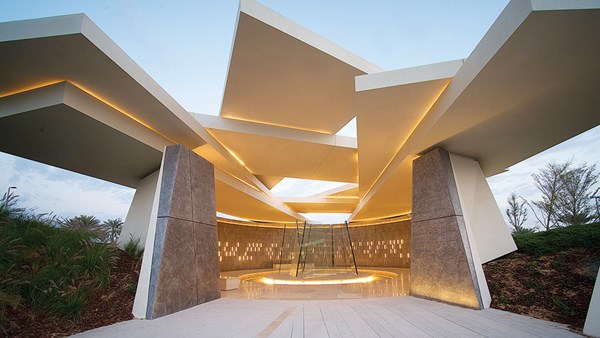 In memory of the righteous martyrs of the country who sacrificed their pure lives in fulfillment of national duty, Wahat Al Karama, which was officially inaugurated on November 30, 2016, was erected as a national building embodying the highest sense of pride in the honorable exploits of the country’s martyrs, and in gratitude for the sacrifices and sacrifices they have made, to preserve the security and dignity of the nation and to protect its achievements and achievements.
The name “Wahat al-Karama” was adopted by His Highness Sheikh Mohammed bin Zayed Al Nahyan, President of the State, may God protect him, because of the significance the name carries in connecting the present with the past, and in reference to the close connection with the past characterized by originality and evoking apart from the usual, with the word oasis coming to the fore, based on the prevailing environment in the Emirates, which in the past consisted of green oases through which falaj passed flowed , and merged them with the sublime name “dignity”, in honor of the souls who were serious about giving, so they deserved the best credit.
The Office of Martyrs’ Families Affairs manages and supervises Wahat al-Karama and follows up the necessary plans and programs in coordination with the relevant authorities and institutions in the country to build this national monument.

Location and design
Wahat Al Karama is located in a vital area opposite the Sheikh Zayed Mosque on the east side and on the other side it is bordered by the General Command of the Armed Forces and the Ministry of Defence. The area of ​​the Karama oasis is 46,000 square meters and includes internal and external stations throughout the oasis. In addition to the expansion, it includes the Visitor Center, Pride Square, the Martyr’s Monument, the Honor Pavilion, and other associated facilities.
Al-Fakhr Square is the second station in Wahat Al-Karama and covers the largest area, which is about 4000 square meters. It is surrounded on all sides by stands that can hold up to 1,200 people. Sandy limestone was used to cover the pitch and stands.
The field is also distinguished by the presence of a reflective water area in the center, which takes a circular shape with a depth of 2 millimeters, where the reflection of both the Martyrs’ Monument and the Sheikh Zayed Grand Mosque, located on the opposite side of the Oasis of Dignity, gathers in one image parallel to the Martyrs Monument to give a breathtaking view. There is also a side waterfall on the main street, which adds beauty and elegance to Al-Fakhr Square and gives it an atmosphere of tranquility and peace.
The monument forms the most important part of the Wahat al-Karama as it is considered the third of the external stations of the oasis as the monument consists of 31 aluminium-clad panels, each based on each other in a pictorial and symbolizing real life the highest meanings of unity, cohesion and solidarity between the leadership and the people. These panels are also marked by inscriptions, poetic excerpts and wise sayings from the leaders of the UAE, written to emphasize the courage and magnanimity of the brave martyrs of the homeland.

Feelings of pride and pride
The poetic verses and quotes are mixed with feelings of pride and pride inscribed on all the tablets of the Martyr’s Monument, including poetic fragments of the late founder, Sheikh Zayed bin Sultan Al Nahyan, may God rest his soul, in the two front panels of the monument, while the rest of the panels bear engravings of the poems and sayings of the late Sheikh Khalifa bin Zayed Al Nahyan, may God rest his soul, as well as quotes from His Highness Sheikh Mohammed bin Zayed Al Nahyan, Chairman of the State, may God protect him, and His Highness Sheikh Mohammed bin Rashid Al Maktoum, Vice President and Prime Minister of the UAE and ruler of Dubai, may God protect him, and at the end The panels A horizontal plank is located on which all the columns rest.It becomes the called “oath board”, which symbolizes the soldiers of the fatherland and reflects the solidarity relationship between the leaders, the people and the protectors of the fatherland.

Honor suite
The Honorary Pavilion is the last station of the Wahat al-Karama, on the right side of which Surat Al-Fatihah is inscribed. The ceiling of the pavilion is covered with eight panels, seven of which symbolize the seven emirates of the state, while the eighth panel represents the martyrs of the Emirates. Part of Surat Al-Imran was engraved in the upper panels of the pavilion.
The honorary wing contains all the names of the martyrs, engraved on panels formed from parts of the structures of the military vehicles of the UAE Armed Forces, used in previous missions, and recycled in an innovative way, as they are in pieces were cut in medium sizes that were melted down in UAE and then sent to China and Australia. The rest of the engraving work of the martyrs’ names was completed after they were formed into the shape of panels. The honorary suite was distinguished by the presence of a glass installation in the center of the suite, which consists of seven transparent glass panels reaching a height of 346 cm, each symbolizing the seven emirates. On all these panels, the Oath of Allegiance to the Armed Forces of the UAE was engraved in a beautiful artistic way, so that the visitor can read the oath from all sides. Around the panels is a circular pool of water in which the water flows calmly and evenly.