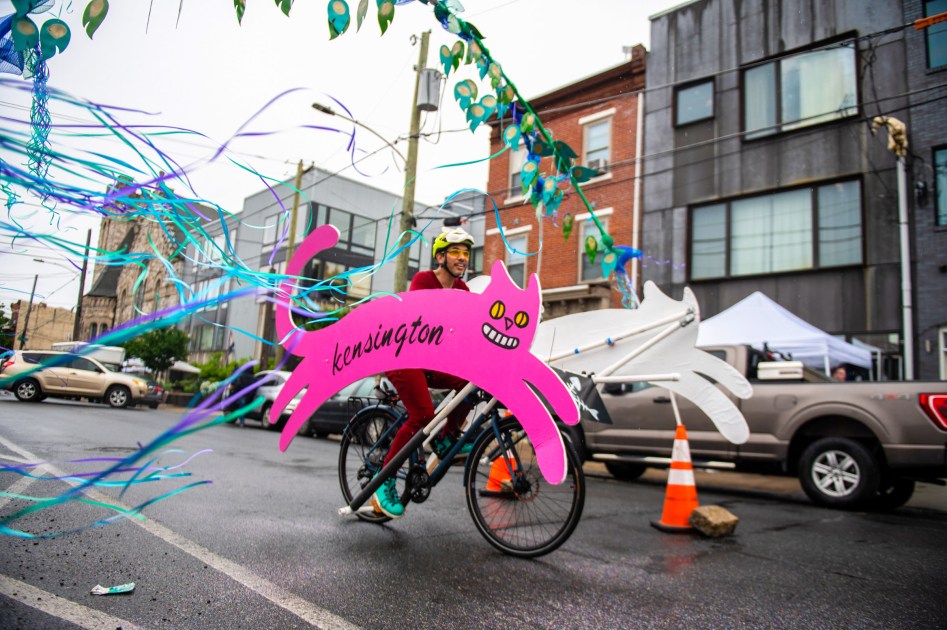 The obstacle race and food party is about as Philly as it gets.

Umbrellas, confetti and small orange hand towels were in equal measure on Saturday as the Kensington Derby & Arts Festival returned after a two-year pandemic break.

Presented by the Philadelphia Federal Credit Union, the street fair has been around since 2007. Its most unique feature — originally called the Kinetic Sculpture Derby — is an obstacle course with participants on human-powered structures, where the only design requirement is that the vehicles can maintain a speed of at least 3 mph.

When the New Kensington Community Development Corporation kicked off the intentionally wacky event 15 years ago, organizers hoped it would draw attention to local artists, neighborhood businesses, and the area’s commercial aisles. Judging by this weekend’s turnout, it’s working as intended.

Despite continued rain throughout the day, hundreds of people descended on the Trenton Avenue area between Norris and Frankford to stroll past 100 vendors selling food, drink, handmade goods and art.

Festival-goers also cheered on racers, who navigated around beer barrels, bubbles and glittery clouds before reaching the final: an iconic mud puddle that entrants had to wade through for a chance to win one of 10 categories.

As one contestant put it, Hall & Oates was playing, people were yelling and there was mud everywhere: about as Philly as it gets.

Scroll down for photos from the event captioned “Return of the Mud.”