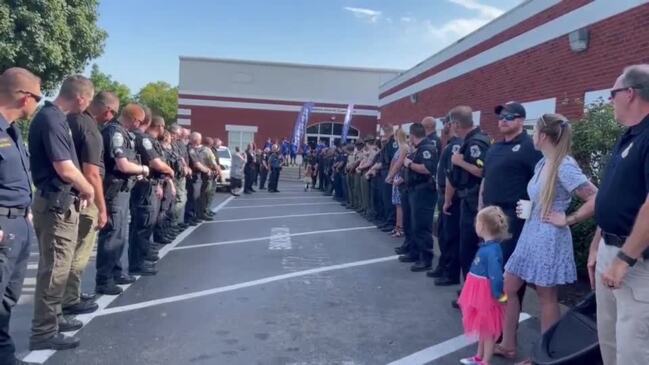 According to a post on the La Vergne Police Department’s Facebook page, the daughter of a deceased police lieutenant in the Nashville area was escorted to her first day of kindergarten. The post said officers surrounded Anna Stolinsky as she walked to the front door in honor of her late father, Police Lieutenant Kevin Jay Stolinsky of the La Vergne Police Department in Tennessee. These footage shows officers queuing outside the school as Anna rushes through them, giving high-fives along the way and hugging members before being escorted into the school by an officer. Kevin Stolinsky, who died on duty in November 2021 as a result of a medical emergency, was also a US Navy veteran, according to local news reports. Local news reported that Anna was given an American flag at his funeral last year in honor of her father’s 20 years of service. Credit: La Vergne Police via Storyful