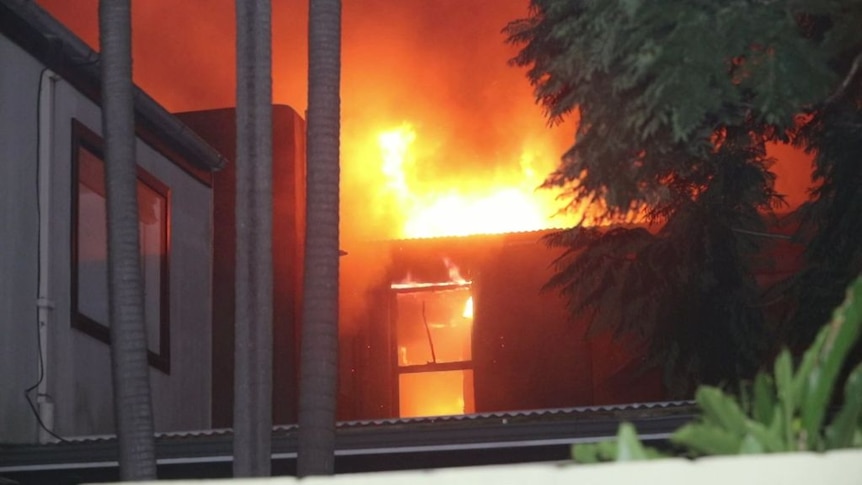 Police fear more bodies will be pulled from the rubble of a boarding house fire that claimed three lives and left an elderly man in a critical condition in Sydney’s inner-west.

Several residents at the building opposite the Carlisle Castle Hotel, on the corner of Probert and Albermale streets, became trapped inside the property at 1am on Tuesday.

A witness told officers she saw a man running shirtless from Vajda House in Newtown shortly before an explosion ignited the inferno.

Investigators have seized a fuel canister dumped under a car near the property, which is meant to be a safe refuge for those looking to rebuild their lives.

Sources have told the ABC the evidence is considered “crucial”, with homicide and the arson squad investigating a fire they believe was “maliciously lit”.

A male neighbour, who did not want to be named, said a man tried to light his fence on fire a few weeks ago.

“He was wandering around, looking into houses and over fences — it was strange and then I noticed him trying to set my fence on fire,” he said.

“I also heard him asking around about a boarding house — it was if he was trying to find someone.”

“We still haven’t been able to explore all the rooms in the boarding house so fingers crossed that the death toll won’t rise but we still have some fears that people could be unaccounted for yet,” Mr Cotter told ABC Radio Sydney last night.

“We’ve made some inroads (since Tuesday morning) into the ground floor, and we’re inspecting that with the structural engineers.

“We have to put a fair bit of weight up on that floor … we have to make sure that it’s structurally safe.”

Mr Cotter said engineers, police rescue and fire and rescue would be assisting.

“We’re hoping we will be able to get up into that first storey (today) and make sure that we recover what we know is there and then clearly look for any other people who might have perished,” he said.

Three people were taken to hospital for treatment for serious burns and smoke inhalation.

An 80-year-old man called Ronnie is believed to have jumped from the first floor to escape the inferno.

Unable to walk and covered in blood, locals had to carry him to safety until paramedics arrived.

He was taken in an ambulance to Royal North Shore Hospital, where he remains in a critical condition.

Assistant Commissioner Peter Cotter yesterday said the fire was being treated as a murder and had been “maliciously lit”.

“We are treating this as suspicious — it was an explosion, the flames took hold extremely quickly,” he said.