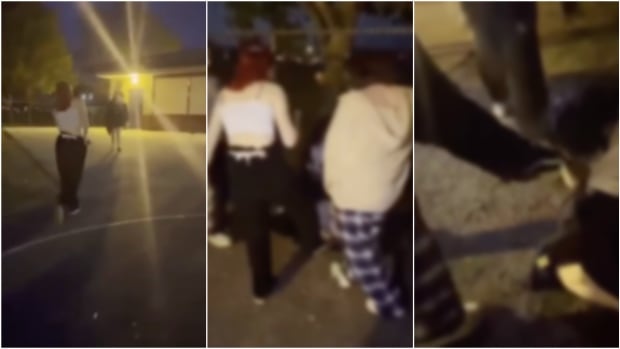 Police in Vancouver and Surrey say they are investigating a series of violent attacks involving groups of teenagers targeting one person.

The most recent incident occurred at Hillcrest Elementary School in Surrey on Saturday night, according to Cpl. Vanessa Munn with Surrey RCMP.

“The violence shown by the youth in this incident is extremely disturbing,” Munn said on Wednesday.

Video of the attack was recorded and posted online. It shows several teenage girls yelling at a girl who is bleeding from her face.

The group curses at her and chases her, before driving her into a bend against a wire mesh fence. She was made to kiss the shoes of her attackers, while apologizing profusely for something – it’s not clear what.

“There appeared to be one main aggressor, but there were also other people who attacked the victim,” Munn claimed, adding that a girl was arrested on Saturday before being released on parole.

Munn said she has not yet been charged, but likely will. Costs are also being considered for the other teens, she said.

“This was an extremely traumatic incident for this victim,” Munn said, adding that she was taken to hospital by officers who found her near the school.

“I’m sure this is something that I’m sure will be with them for a very long time.”

In the most recent case, on April 24, Addison said a 13-year-old from West Vancouver was lured to Stanley Park after befriending someone on social media. He was overrun by a group of teenagers, who allegedly kicked, pepper sprayed and robbed him.

He was found walking alone and bloodied on the seawall after the incident, Addison said.

“It’s quite likely that we’re just scratching the surface with what we know and the vast majority of things like this go unreported,” he said.

The Vancouver Police Department has set up a tip line for information about these incidents: (604) 717-0614.

‘It is a major concern’

According to Bonnie Leadbeater, professor emeritus of psychology at the University of Victoria, these kinds of incidents were much more common twenty years ago.

“It’s unusual and it’s gotten more unusual,” Leadbeater said. “It’s hard to know why we’re seeing this now, but it’s clearly a major concern. We may have just become blasé.”

Leadbeater said incidents like those reported by police and posted in videos online may be related to how teens have been affected by the COVID pandemic. But, she said, it’s always about group dynamics, status, loyalty and dominance.

“It’s not just about bullying, it’s about assault,” Leadbeater said, “but it still has its foundation in this group — intra-group/out-group loyalty to a leader.”

She said it’s always safer for the victims to come forward and make sure adults know what’s going on so they can shut it down.

“These are traumatic — very traumatic events for a young person. It’s hard to regain your safety when you’ve been attacked in this way, and it’s going to take time,” Leadbeater said.

She said parents who read incidents like this in the news can take the opportunity to check in with their children to talk about what’s going on and how to deal with it.