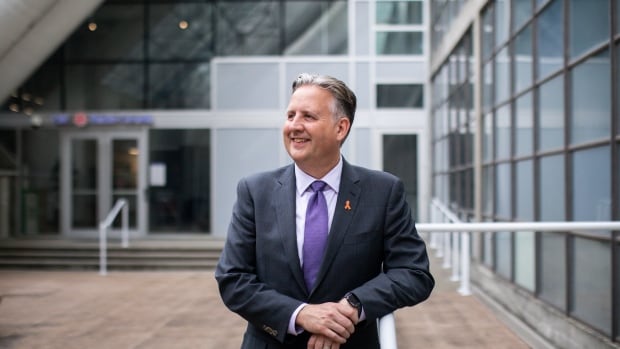 Kennedy Stewart knows this isn’t the kind of campaign where the incumbent can talk about how much better the city has been since they were elected four years ago.

“I wouldn’t say the last few years have been pretty good. I think COVID has been very hard on people, and in fact I think we [in] sort of an aftershock of COVID right now.”

Stewart, who ran for reelection as mayor of Vancouver, acknowledged some frustration with City Hall, particularly over housing affordability and homelessness.

But he puts more blame on actions stemming from the pandemic and the difficulties in creating cohesive policies with an unpredictable minority council, the first in Vancouver in 32 years.

It’s a big reason Stewart says he’s not running as an Independent as he was in 2018, but is instead starting a new party called Forward Together, which, along with the mayor, leads six council candidates: Dulcy Anderson, Jeanette Ashe, Hilary Brown, Alvin Sing, Tesicca Truong and Russ Wvong.

“Having six people with me will make a big, big difference in speeding up the things I really wanted to do but just couldn’t. Guess they’re really stuck in a lot of detail and not looking at the big picture .”

Stewart’s platform (which you can read here) doesn’t hold many surprises if you’ve been paying attention to his time as mayor.

It includes approving and enabling 220,000 new homes over the next decade — more than half of which are rental, social housing or co-ops — moving forward with the goals of the Vancouver and Broadway plans, centering much more density around rapid transit locations. .

It also includes changing rent laws so evicted tenants can move back into the new building at the same or lower rent than before and developing sites such as the current St. Paul’s Hospital, the old Molson Brewery and the Expo Lands.

“We’ve pretty much ruled out demand as a housing issue. It’s real supply and the right kind of supply,” Stewart said, again arguing that the current council was hindering his process.

“There’s huge potential there to build the kind of homes we need. But they haven’t gone any further [from developers] because, frankly, they are afraid of the municipality.”

On crime and mental health issues, Stewart promises to create a group of counselors and welfare teams that can help those who cause problems, rather than people calling 911.

“To think you’re going to send a police officer to that person and somehow things get better. That’s not going to happen,” he said.

While Stewart promises 50 new public toilets in the city and expands access to safe supplies, he defends the city’s current approach while being critical of how his opponents have spoken about the issue.

“I think in parts of the city you’ve had an increase in the number of people living on the streets and criminal activity in some cases involving violent crimes. So I fully recognize that,” he said.

“But what’s so weird about this election and what makes me so angry is that I have four people on the podium with me, and they’re all trying to say we’re going to arrest ourselves out of what’s going on on our and it’s me. totally disagree…this election was really about bad bashing.”

Other promises made by Stewart include accelerating lobbying for rapid transit along 41st Avenue, creating 6,000 new childcare places, and continuing to pursue the goals of climate emergency policy — excluding mobility prices.

It’s a platform that builds on people like Stewart’s values ​​and town hall in general over the past four years and want a council that can implement these ideas more efficiently.

Whether Vancouver decides to move forward with Forward Together will be revealed on October 15.

CBC News profiles all 10 political parties in Vancouver ahead of the October municipal election.

Incumbent Kennedy Stewart is running for mayor of Forward Together.