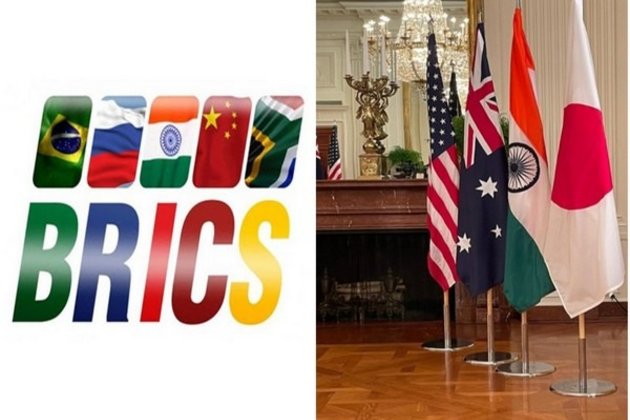 Washington [US]June 14 (ANI): The Quad and the BRICS, the two rivals, compete with each other as they consider India one of the most important members of the countries.

The Quad has a rival, BRICS, which brings together ministers from Brazil, Russia, China, South Africa and India and the leaders see India as the key member for the obvious reason to oppose China.

Tokyo recently hosted the “Quad”. That the leaders of Japan, the United States, India and Australia have met is quite an achievement, especially when one of its key members, India, takes a position on Russia’s war against Ukraine that is so different from the others. .

India abstained on the UN Security Council resolution on Ukraine.

In particular, the Quad has some sort of rival to the BRICS, which has gathered ministers from Brazil, Russia, India and China since 2006 and will add South Africa in 2011.

Initially, the BRICS summits seemed to symbolize the growing importance of these major emerging economies, also reflecting in a western-oriented way the fact that the idea of ​​”the BRICS” was originally created by a British chief economist at US investment firm Bank Goldman Sachs as an intellectual piece of marketing, according to Asia Times.

This year BRICS is chaired by China.

Compared to the Quadrilateral Security Dialogue, the BRICS summits look almost technical. The Quad was initiated in 2007 by Shinzo Abe with the idea of ​​influencing or reshaping the grand scene of geopolitics, using joint military exercises between the four countries as a way to enhance the Quad’s role as a counterweight to the Indo- Pacific to emphasize the growing role of China. †

It should be noted that India is a member of both the Quad and BRICS groupings.

The fairly intensive annual program of BRICS ministerial meetings and other events shows that, even if this grouping is largely ignored by the international media, it has created a fairly strong habit and need for consultation and cooperation between the five member states.

Japan, the United States and Australia see India as the most important member for the obvious reason to oppose China. But while India sees the need to counter or deter China, it also clearly sees a purpose in fairly intensive consultations with China through the BRICS framework, Asia Times further reported.

And, as everyone knows since Russia’s action in Ukraine on Feb. 24, India remains dependent on Russia, China’s “strategic partner,” for military supplies and technology, and has refused to cooperate with sanctions or condemnations for Russian behavior. .

The February joint statement between Russia and China on that strategic partnership also mentions a goal to deepen cooperation between the two countries and India. (ANI)