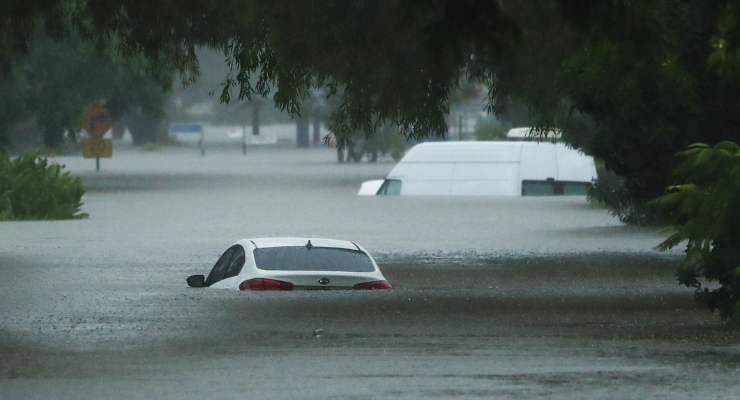 Coastal NSW residents should prepare for possibly life-threatening flooding — with Sydney’s coast to cop the worst of the weather on Wednesday — as Queensland flood, known also being called a “rain bomb“, moves south, The Brisbane Times report. An area half the size of Tasmania — reaching from Hervey Bay to northern NSW and west to Toowoomba — has been inundated so far, with 100mm of rain recorded in Brisbane yesterday, The Australian ($) says. Queensland schools in 14 local government areas will be closed today because of the rapidly evolving emergency, Guardian Australia adds, and Brisbane’s Wivenhoe Dam is now at a staggering 177% of capacity, causing the dam’s manager to begin controlled releases yesterday morning. Brisbane’s lord mayor says there is still “at least 24 hours of danger” ahead in the Queensland flood.

Meanwhile in NSW, Lismore on the north coast has been ordered to evacuate after the floodwaters topped the levy banks this morning, ABC reports, while a local man is still missing. Six people have died in the torrential weather event so far, after an SES volunteer was swept away on Friday en route to a rescue. So why is this happening? ABC’s weather reporter Kate doyle reports a “blocking high” has kept the low-pressure system pinned over south-east Queensland since mid-last week. In the northern hemisphere, blocking highs have been linked to the warming climate, according to a 2018 paper looking into extreme weather in Greenland.

Australia will provide so-called “lethal aid” to Ukraine, Prime Minister Scott Morrison says. That means we’ll send funds to NATO so the alliance can put more and better weapons in the hands of Ukrainian forces, Guardian Australia continues. He made the comments at a peace vigil in Lidcombe at the weekend. Morrison says we are also considering booting Russian diplomats and stopping trade to send a message, continuing “Russia must pay a heavy price” and nothing is off the table. According to the federal parliamentary library, we imported $86 million worth of Russian crude oil last financial year — about 1% of our total imports. treasurer josh Frydenberg has told the AFR “fuel and food prices will rise, flowing through to inflation” and Australian exporters, not consumers, will benefit from the unrest.

Labor’s shadow foreign affairs spokesperson Penny wong indicated to ABCs Insiders yesterday that she had concern China would do likewise in Taiwan, saying matters in the “status quo … can only be resolved peacefully”. Wong also said China fell short of its responsibility as a “global leader” on the UN council by not condemning Russia’s invasion, and confirmed Labor’s defense spending would be no less than 2% in what she called a changing strategic circumstance. So will China invade Taiwan? One thing is for sure, The Atlantic’s Michael Schuman writes that the Chinese Communist Party will never accept the separateness of Taiwan. But President Xi Jinping will observe the pain — and cost — of Russian counterpart Vladimir Putin’s deadly move, and bid his time.

Labor’s decent lead ahead of the Coalition has narrowed by one point in the latest Newspoll, The Australian ($) reports, but both Opposition Leader Anthony Albanian (44%) and Prime Minister Scott Morrison (43%) have jumped in approval ratings. Labor’s primary vote is at a post-election high of 41% — that’s compared to the Coalition’s 35%. When it comes to who the preferred leader is, Morrison remains the favorite at 42%, while Albanese is at 40% — a two-point jump. Interestingly, the United Australia Party (UAP) has leapt ahead of One Nation, now commanding 4% of the popular vote (UAP achieved 3.4% in the last election). That makes the UAP the largest fringe party (the Greens are well ahead at 9%). Newspoll speaks to 1525 voters.

Speaking of the UAP — it appears chairman Clive palmer has COVID-19. Palmer, 67, was taken to hospital last week and is now reportedly receiving treatment at home for pneumonia too, The Australian ($) says. Palmer is a known COVID-19 vaccine skeptic who told reporters a few weeks back that he is not vaccinated. Last week the SMH reported Palmer has spent 100 times more than Labor or the Coalition on advertising, some $31 million since August. regular Worm readers would be accustomed to seeing the loud yellow strap on the front pages of the newspapers further down — the chair of the Center for Public Integrity said it’s the media’s responsibility to question whether to accept the ad dollars.

ON A LIGHTER NOTE

It was called the “ship of gold” — the SS Central America was stocked full of hard-earned California gold from the state’s gold rush in 1857, headed home to New York to offer miners and their family a totally different shot at life. But the ship sailed directly into a hurricane, and Mother Nature took it for her own. The SS Central America sat at the bottom of the ocean near South Carolina for over a century, holding one of the world’s largest and most precious treasures entombed in its ghostly hull. Then in the late 1980’s, research scientist Tommy Thompson decided to do something. He raised US$12 million from 161 investors to fund an expedition down to the seabed — and when his crew got there, they were met by a luminous sight.

Gold nuggets, ingots and coins worth tens of millions of dollars were brought up to the surface, but investors never saw a dime. Thompson disappeared for years until he was arrested in 2015 in a Florida hotel. The plea deal was simple, investigators said. Two years in jail and tell us where 500 gold coins are. But Thompson refused. He’s been in jail ever since, holding onto a near-priceless secret. But the ship of gold held many souls too, as so many went down with it — for the first time photographs show the faces of those people on board. A survivor later recalled that, at the moment the ship began to sink, miners cast away their hard-earned gold — some thinking it would help them float, others knowing they couldn’t take it with them to their “watery grave”.

Hoping the coffee is hot and the breeze is cool today folks.

The water hasn’t gone down yet, and we haven’t seen the full extent of the damage to our community due to catastrophic flooding. We have started a fundraiser to help local residents and businesses who have been affected.

The defense minister seems to have forgotten himself after setting up a GoFundMe for those affected by the Queensland flood. Pundits were quick to point out — erm, isn’t providing financial assistance in a natural emergency the role of government?

“Russia is breaking the law, but what are the consequences? Under the UN Charter, acts of aggression are the domain of the Security Council, which has power to decide on measures in response, including armed force. Member states are bound to assist.

“In the case of Iraq’s invasion of Kuwait, that’s what happened: the Security Council said it was illegal and everyone got together to kick the Iraqis out. Russia, as a permanent member of the Security Council, has a right of veto over any decision the council wants to make.”

By his TV satire, you will know him: when Ukranian fiction became today’s fact

“Now that Russia has invaded and Ukraine is at war, the story of the naive but good-hearted man trying to change a system he doesn’t fully grasp plays as unbearably poignant.”

End alumina exports, expel diplomats… if Morrison is serious, here’s what he can do

“Seize Rusal’s 20% stake in the Queensland Alumina Limited plant† Rusal is Russia’s giant aluminum producer, which earns billions in profits and holds a one-fifth stake in Rio Tinto’s QAL plant in Gladstone, Queensland. Rusal’s board and management can direct their complaints to the Kremlin.

“End exports of alumina to Russia† Russia relies heavily on alumina exports from Ukraine and Australia — in our case, around half a billion dollars worth a year. Time to shut off its supply, which will in turn inflict significant damage on Russian exports of aluminum products, mainly to Europe.”

READ ALL ABOUT IT

The Russian invasion of Ukraine is a huge wake-up call — Alexander downer (The AFR): “This represents the first time a European country has been invaded unprovoked since 1941. Europeans had assumed that this sort of warfare was behind them: that two world wars and the evolution of international law and multinational institutions such as the European Union and NATO would guarantee such unprovoked attacks would never happen again. Europe is shocked, and so are foreign policymakers in the US. But, second, Putin has exposed the weakness of America, and the West more generally. This is a consequence of treating dangerous autocrats with soft, comforting rhetoric. You can’t imagine Russia invading a democratic country of 45 million people if Ronald Reagan was at the White House.

“Reagan’s slogan was ‘peace through strength’. Well, we now have ‘war with weakness’. I had assumed Biden and his allies would collectively persuade putin that the wrath of the West would undermine the stability and prosperity of Russia and in turn threaten Putin’s position. That may well be what happens in time. But let us draw breath and think about this. While Western countries have been convulsing themselves in debates about transgender pronouns and salami-slicing their societies into South African-style racial groups, autocratic governments have increasingly judged that the West is a paper tiger.”

Memes could help you talk to your teen about the war in Ukraine — Daisy Turnbull †The Age): “At its heart, parenting really is just a social experiment. You take some of what your parents did (dinners together wherever possible, the news trumps any other TV show) and add some new theory into the mix (‘positive parenting’ or ‘pressure-free veggies before dinner’) and, eventually, your kids may become parents one day and do the same with their children. But like any experiment, the result (18-year-old leaving home) can be affected greatly by external factors — not only with each generation (for example, technology), but even year by year. The last two or three years have had too many external factors. Pandemics, lockdowns and now war in Ukraine…

“For teenagers especially, social media, and the memes that populate it, are often how they connect and process the world around them. If your teen engages with topics like the chance of World War III, it may not be through the news that you consume, but that is not to say they aren’t interested or want to talk about it. Seeking a meme is not the same as hiding under a doona. It is a self-protective way of coming out from under it.”