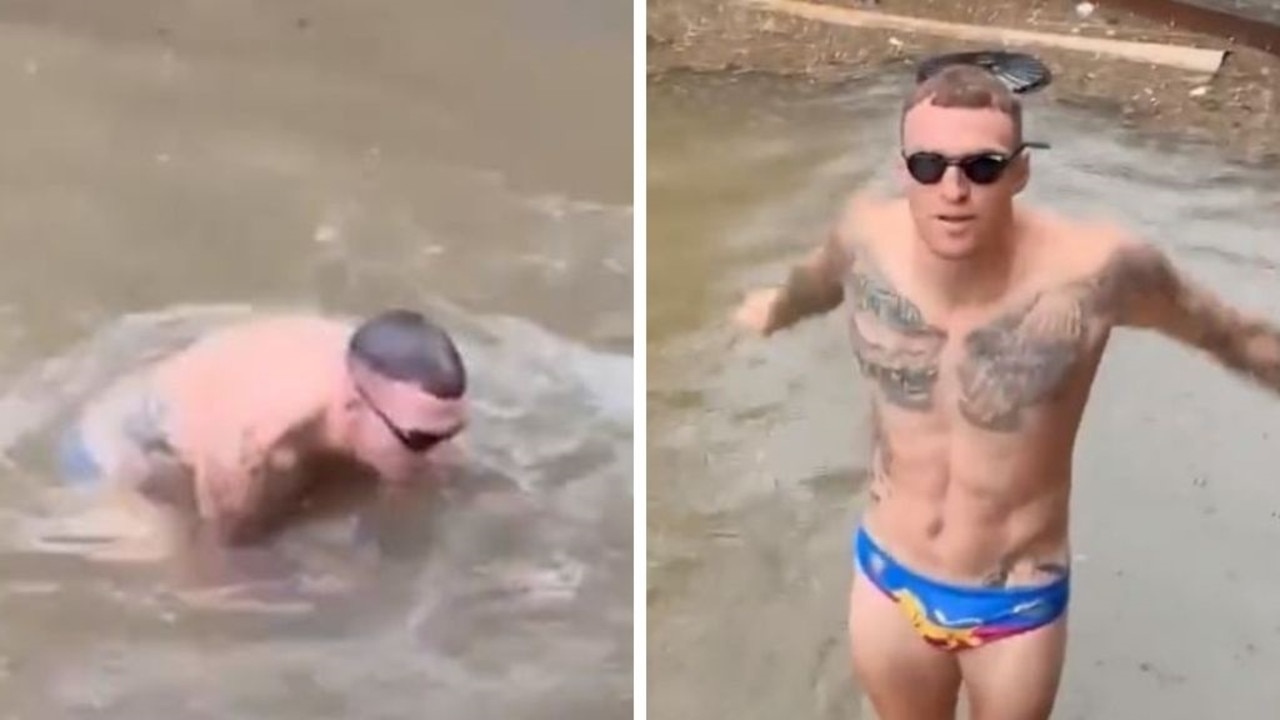 We hope Mitch Robinson woke up feeling fighting fit after he took some liberties for a laugh during Queensland’s disturbing flood crisis.

Brisbane’s medical staff might want to have a word with Mitch Robinson after the popular AFL larrikin tried to inject some humor into things as heavy rains and floods ravage southeast Queensland.

The Lions star posted a video on social media on Sunday showing him at home decked out in nothing but his club budgy smugglers and goggles, with the caption “Always wanted a lap pool! #brisbaneflood”.

He dives in and gives everyone his best Ian Thorpe impersonation, with Bruce McAvaney’s swimming commentary dubbed over the top of the clip.

But as many on social media pointed out, Robinson may not have been aware exactly what he was subjecting his body to during the lighthearted moment. Plenty of Twitter users commented on the clip letting the tough-as-nails midfielder know about the risk of infection by swimming in flood waters contaminated by sewage.

Journalist Eliza Barr said on Twitter “Mate you can practically see the gastro radiating from the water” while writer Benjamin Law wrote: “Last time Brisbane flooded there were official warnings about the water because it was absolutely HEAVING with human waste.”

According to the WorkSafe Queensland website, “Environmental conditions after storms and floods increase the risk for infectious diseases” while NSW Health says: “Flood waters contaminated with sewage may carry a range of viruses, bacteria and parasites.”

However, Robinson didn’t seem too perturbed when responding to comments from a Twitter user who said the swimming expedition was “not the smartest thing you’ve ever done” and “I don’t want you to get sick”.

“Grow up Helen,” Robinson replied. “Could get sick walking into a cafe, don’t know why you’d feel the need to tweet that.”

Seven people have now died as the result of flash flooding in southeast Queensland, with a 59-year-old man becoming the latest victim of the dangerous weather.

More than 49,000 homes are believed to be without power, with people in Brisbane, Ipswich and Lockyer Valley, Logan and Moreton Bay urged to conserve water.

Residents in Brisbane’s low-lying areas have been told to make sure they are prepared for the continuing floods.

Almost 1000 schools across southeast Queensland will be closed today, with Premier Annastacia Palaszczuk announcing 630 state schools and 356 catholic and independent schools would be shut due to the dangerous flooding.

People have also been urged to work from home if possible, with Ms Palaszczuk saying yesterday that the emergency situation would likely continue for the next three days.

“We never expected this rain. This rain bomb is just really, you know, it’s unrelenting,” she said.