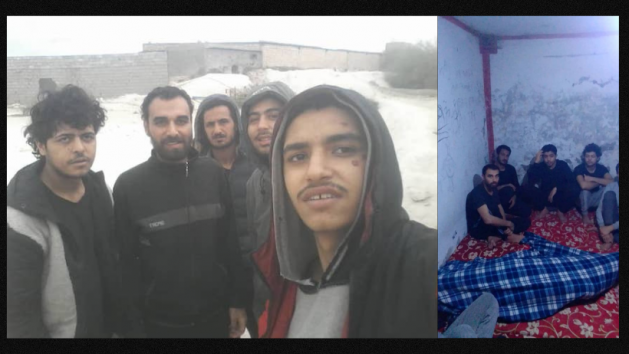 Cairo, Egypt, April 21 (IPS) – Last June, the youths of Mit Al Korama gathered outside one of their homes one summer evening to tell stories of citizens from the village and neighboring villages who had successfully crossed the Mediterranean into Europe .

Some, they were told, returned with a large sum of money and built European-style houses for their families. Others chose to remain in the European Union and encouraged their brothers to do so.

A young man in his thirties from Talkha named “Mohamed Fakih” was among the group, and he said he helped many people who illegally migrated to the Italian coasts.

Despite the Egyptian government’s warnings against illegal immigration and not visiting Libya, some young people continue to try to illegally migrate to Italy via Libya. Egyptian and Libyan smugglers put them in danger of drowning or being kidnapped by gangs and armed militias demanding ransom.

Fakih informed the Mit Al Korama youth that spots were available on a boat departing for Italy in ten days. That place could be theirs if they paid him $5,000.

Ahmed Emad, a 27-year-old with a degree in tourism and hotels but no job, was one of five young people from the village eager to find a better life in Europe. To finance this trip to Italy, his family sold everything they owned and borrowed the rest.

“The mediator sent us to the Egyptian-Libyan border town of Salloum, where we met a group of smugglers who helped us cross the border via mountain roads and out of sight of border guards. We arrived in Al-Masad, Libya,” Emad said. IPS: “The smugglers started treating us differently there.”

“As soon as we arrived, they pushed us into a huge building full of smuggled goods, fuel, sheep and cows, and people like us are waiting their turn to emigrate,” Emad added.

The smugglers never stopped abusing and insulting the immigrants in the warehouse. When they complained to Fakih, the broker who had taken their money, he advised them to wait patiently for the boat to arrive to take the group to their final destination.

“We were held captive in the warehouse for five and a half months, sleeping in the cowshed, drinking from empty petrol containers and eating only one meal a day,” Emad added.

Emad Eldanaf, his father, said they had no contact with the smugglers in Libya and were unable to reach the young men at first, which made them very anxious. Finally, contact was made.

“There were 28 men from our village on the boat. The most recent group has returned in the past two weeks and we are still negotiating with the militia about the remaining three,” Eldanaf told IPS.

Emad’s experiences were mirrored by Ibrahim Abdullah and his younger brother Kamal.

“We moved between different warehouses between Sabratha and Zuwara – 120 km west of Tripoli. On the eve of November 9, they told us that we would sail from the coast of Ajilat to Italy in a few hours,” Abdullah told IPS.

“Eventually we all moved to the boat, about 50 of us.”

“At dawn, water seeped into the boat. We tried to drain the water until we got frustrated,” explains Abdullah. “Death was only a few feet away.”

According to Abdullah, the immigrants asked for help from the Italian authorities, who said they would wait until the boat was closer to the Italian coast before intervening.

The Tunisian authorities also ignored them. It was clear that they would sink and perish with the boat.

“We knew that calling the Libyans would arrest us, but we went ahead and did it anyway,” Abdullah said, explaining their desperation.

In the afternoon, Libyan militias captured us and transported us to the port of Tripoli, dividing us into two groups, one to prison 55 and the other to Bir Al Ghanam prison.

Bir al-Ghanam is a city in western Libya, south of Zawiya. It was the site of several battles during the Libyan Civil War. Anti-Gaddafi forces took control of it on August 7, 2011, just weeks before taking Tripoli.

“We were called ‘the goods’ by Libyan militias. They made us wish that death would be free from this pain. My father agreed to pay the ransom for our release after I begged him,” Abdullah recalled. Militias suspected that some families would not pay the ransom, they killed the prisoners and threw their bodies in the desert. Two members of my group died and were thrown into the desert without being buried.”

Emad, Kamal and Abdullah remained with their militia for another four months. Lice and scabies were their lieutenants all the time. Finally, their family reached an agreement with the kidnappers and agreed to pay $6,000 for Kamal and Abdullah, while Emad’s family had to pay $5,000 to free him.

Haj Riad, a Libyan smuggler, acted as an intermediary in paying ransoms. The money was transferred to several Libyan bank accounts, where he distributed it to militias and returned the three young men to the Egyptian border.

Umm Ayman, a 60-year-old mother, sold a few of her carats to raise 150,000 Egyptian pounds ($10,000) to help her two sons in their travels. Two of her three sons were then kidnapped with Emad and Abdullah.

A few months later, she had to sell her house, sheep, a cow, and the rest of her possessions to pay $13,000 to get them back.

“We sold everything we sold to get our children to travel, and we borrowed them to bring them back. Even my mother’s gold earrings had to be sold to pay the ransom,” Ayman told IPS.

“When my children returned at the end of January, they sought out Fakih, the mediator, and found that he had fled with his family.”

The family believes he continues to ensnare victims in the vicious circle as young people try to find a better life in Europe.

A Son’s Desperate Plea to His Father

“I beg you, father, get us out of here; my friend Muhammad Misbah is in good health and I was on the brink of death yesterday. Do whatever it takes to get us out of here; pay the ransom, whatever it takes You and Ibrahim’s mother try to do everything We are so offended here, our bodies are weak and sick An audio message from Ahmed Emad to his father.

This article is part of a series of articles from around the world on human trafficking. IPS coverage is supported by the Airways Aviation Group. The Global Sustainability Network (GSN) is committed to the United Nations Sustainable Development Goal 8, with a special emphasis on Goal 8.7, which “take immediate and effective measures to eradicate forced labour, end modern slavery and human trafficking and and the elimination of the worst forms of child labour, including the recruitment and use of child soldiers, and an end to child labor in all its forms by 2025.” The origin of the GSN stems from the efforts of the Joint Declaration of Religious Leaders, signed on December 2, 2014. Religious leaders of different religions came together to work together “to defend the dignity and freedom of human beings from the extreme forms of the globalization of indifference, such as exploitation, forced labour, prostitution, human trafficking”.