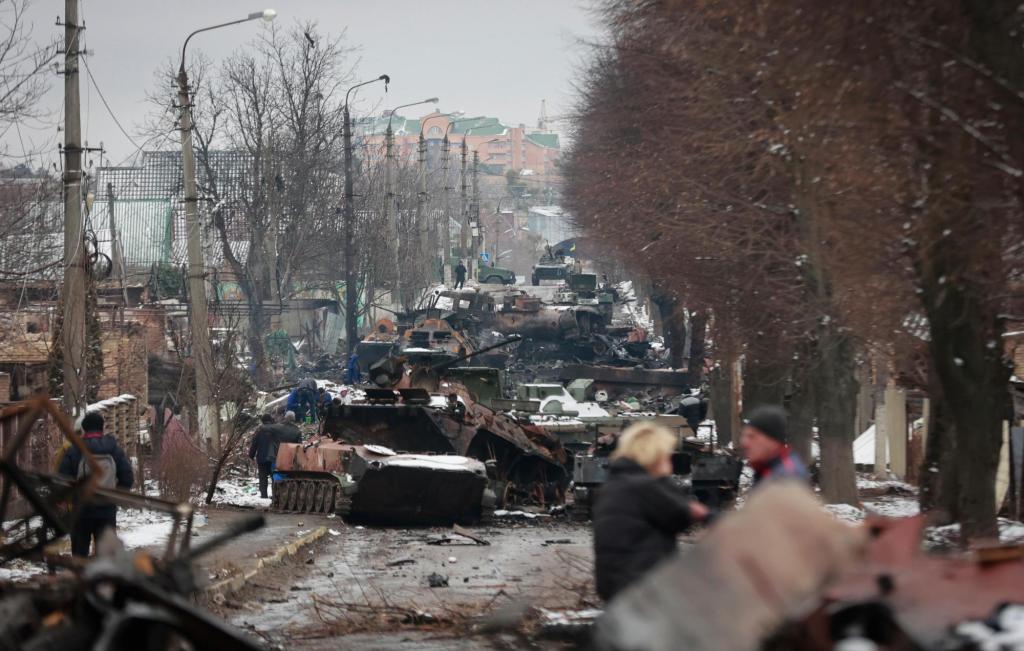 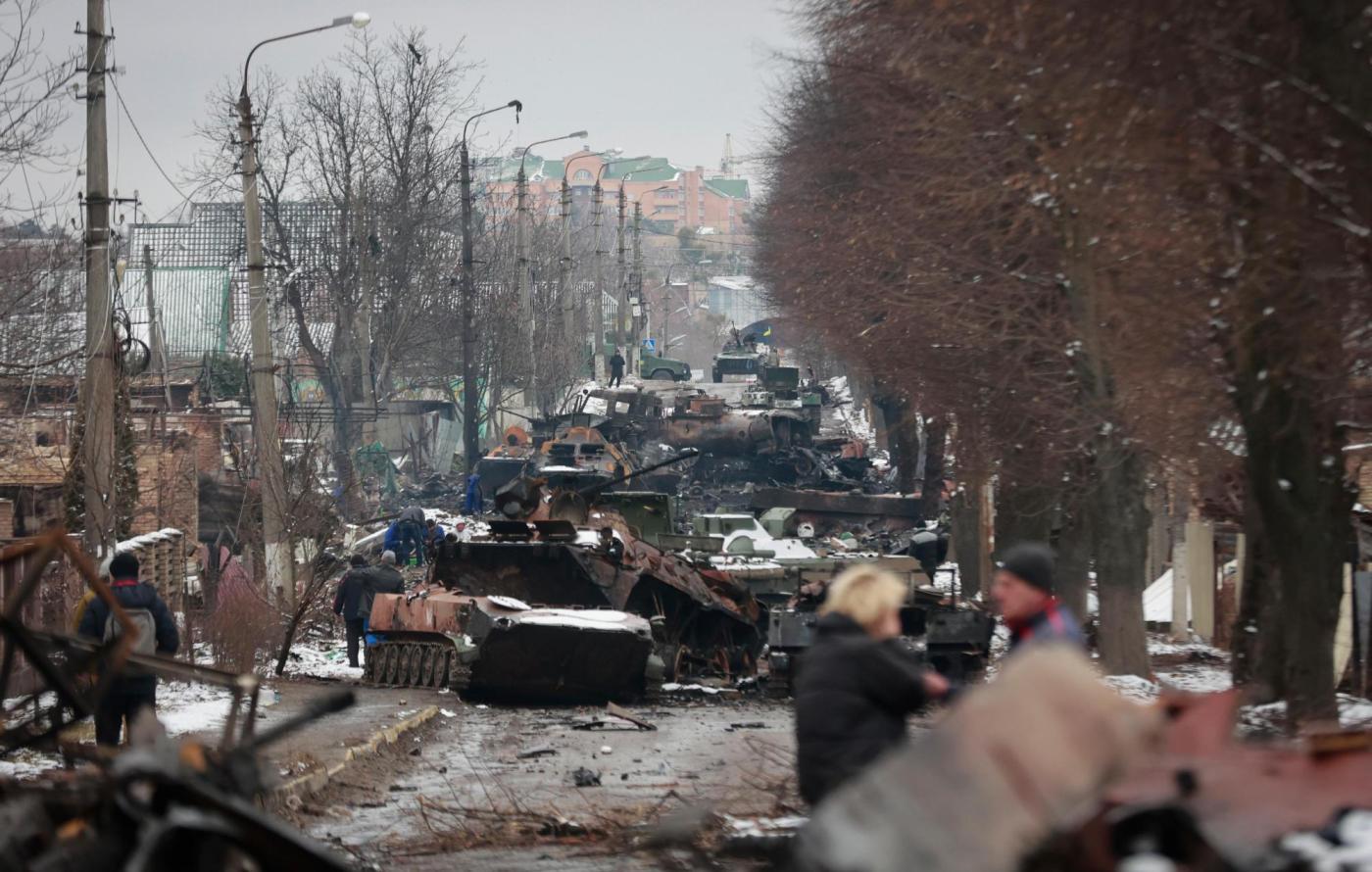 After seven days of Russian assault, the United Nations refugee agency announced that 1 million people have fled Ukraine since the invasion, the swiftest exodus of refugees this century.

Ukrainian President Volodymyr Zelenskyy called on Ukrainians to keep up the resistance. He vowed that the invaders would have “not one quiet moment” and described Russian soldiers as “confused children who have been used.”

Moscow’s isolation deepened, meanwhile, when most of the world lined up against it at the United Nations to demand it withdraw from Ukraine. And the prosecutor for the International Criminal Court opened an investigation into possible war crimes.

Russia reported its military casualties for the first time since the invasion began last week, saying nearly 500 of its troops have been killed and almost 1,600 wounded. Ukraine did not disclose its own military losses but said more than 2,000 civilians have died, a claim that could not be independently verified.

With fighting going on multiple fronts across the country, Britain’s Defense Ministry said Mariupol, a large city on the Azov Sea, was encircled by Russian forces, while the status of another vital port, Kherson, a Black Sea shipbuilding city of 280,000, remained unclear.

Russian President Vladimir Putin’s forces claimed to have taken complete control of Kherson, which would make it the biggest city to fall yet in the invasion. But a senior US defense official disputed that.

“Our view is that Kherson is very much a contested city,” the official said, speaking on condition of anonymity.

Zelenskyy’s office told The Associated Press that it could not comment on the situation in Kherson while the fighting was still going on.

But the mayor of Kherson, Igor Kolykhaev, said Russian soldiers were in the city and came to the city administration building. He said he asked them not to shoot civilians and to allow crews to gather up the bodies from the streets.

“I simply asked them not to shoot at people,” he said in a statement. “We don’t have any Ukrainian forces in the city, only civilians and people here who want to LIVE.”

Mariupol Mayor Vadym Boychenko said the attacks there had been relentless.

“We cannot even take the wounded from the streets, from houses and apartments today, since the shelling does not stop,” he was quoted by the Interfax news agency as saying.

In a video address to the nation early Thursday, Zelenskyy gave an upbeat assessment of the war.

He said the fighting is taking a toll on the morale of Russian soldiers, who “go into grocery stores and try to find something to eat.”

“These are not warriors of a superpower. These are confused children who have been used.”

Meanwhile, the senior US defense official said the immense column of hundreds of tanks and other vehicles appeared to be stalled roughly 25 kilometers (16 miles) from Kyiv and had made no real progress in the last couple of days.

The convoy, which earlier in the week had seemed aimed to launch an assault on the capital, has been plagued with fuel and food shortages and has faced fierce Ukrainian resistance, the official said.

On the far edges of Kyiv, volunteer fighters well into their 60s manned a checkpoint to try to block the Russian advance.

“In my old age, I had to take up arms,” said Andrey Goncharuk, 68. He said the fighters needed more weapons, but “we’ll kill the enemy and take their weapons.”

In the aftermath, Larissa Lipatova crowded under blankets with seven other villages in a cold, damp concrete cellar among jars of pickled vegetables. A candle stuck in a pickle jar, propped up in front of a religious icon, provided their only light.

Lipatova wept, covering her face with one hand, as she spoke in the dark with a message for Ukraine’s invaders. “We don’t need to be freed. Leave us alone!”

Russia also pounded Kharkiv, Ukraine’s second-largest city with about 1.5 million people, in another round of aerial attacks that shattered buildings and lit up the skyline with flames. At least 21 people were killed and 112 injured over the past day, said Oleg Sinehubov, head of the Kharkiv regional administration.

Several Russian planes were shot down over Kharkiv, according to Oleksiy Arestovich, a top advisor to Zelenskyy.

“Kharkiv today is the Stalingrad of the 21st century,” Arestovich said, invoking what is considered one of the most heroic episodes in Russian history, the five-month defense of the city from the Nazis during World War II.

From his basement bunker, Kharkiv Mayor Igor Terekhov told the BBC: “The city is united and we shall stand fast.”

Russian attacks, many with missiles, blew the roof off Kharkiv’s five-story regional police building and set the top floor on fire, and also hit the intelligence headquarters and a university building, according to officials and videos and photos released by Ukraine’s State Emergency Service . Officials said residential buildings were also hit, but gave no details.

Seven days into Russia’s invasion, the United Nations said more than 934,000 people have fled Ukraine in a mounting refugee crisis on the European continent, while the head of the UN nuclear watchdog agency warned that the fighting poses a danger to Ukraine’s 15 nuclear reactors.

Rafael Grossi of the International Atomic Energy Agency noted that the war is “the first time a military conflict is happening amid the facilities of a large, established nuclear power program,” and he said he is “gravely concerned.”

“When there is a conflict ongoing, there is of course a risk of attack or the possibility of an accidental hit,” he said. Russia already has seized control of the decommissioned Chernobyl power plant, the scene in 1986 of the world’s worst nuclear disaster.

In New York, the UN General Assembly voted to demand that Russia stop its offensive and immediately withdraw all troops, with world powers and tiny island states alike condemning Moscow. The vote was 141 to 5, with 35 abstentions.

The vote came after the 193-member assembly convened its first emergency session since 1997. The only countries to vote with Russia were Belarus, Syria, North Korea and Eritrea. Cuba spoke in Moscow’s defense but ultimately abstained.

Ukraine’s UN Ambassador Sergiy Kyslytsya said Russian forces “have come to the Ukrainian soil, not only to kill some of us … they have come to deprive Ukraine of the very right to exist.” He added: ”The crimes are so barbaric that it is difficult to comprehend.”

A large explosion shook central Kyiv on Wednesday night in what the president’s office said was a missile strike near the capital city’s southern railway station. There was no immediate word on any deaths or injuries. Thousands of Ukrainians have been fleeing the city through the sprawling railway complex.

Konashenkov also said more than 2,870 Ukrainian troops have been killed and about 3,700 wounded, while over 570 have been captured.

Russia also ramped up its rhetoric. Foreign Minister Sergei Lavrov reminded the world about the country’s vast nuclear arsenal when he said in an interview with Al-Jazeera that “a third world war could only be nuclear.”

In the northern city of Chernihiv, two cruise missiles hit a hospital, according to the Ukrainian UNIAN news agency, which quoted the health administration chief, Serhiy Pivovar, as saying authorities were working to determine the casualty toll.

— A second round of talks aimed at ending the fighting was expected Thursday, but there appeared to be little common ground between the two sides.

— Russia found itself even more isolated economically as Airbus and Boeing said they would cut off spare parts and technical support to the country’s airlines, a major blow. Airbus and Boeing jets account for the vast majority or Russia’s passenger fleet.

Isachenkov and Litvinova reported from Moscow; Karmanau reported from Lviv, Ukraine. Edith M. Lederer and Jennifer Peltz at the United Nations; Mstyslav Chernov in Mariupol, Ukraine; Sergei Grits in Odesa, Ukraine; Robert Burns and Eric Tucker in Washington; Francesca Ebel, Josef Federman and Andrew Drake in Kyiv; and other AP journalists from around the world contributed to this report.