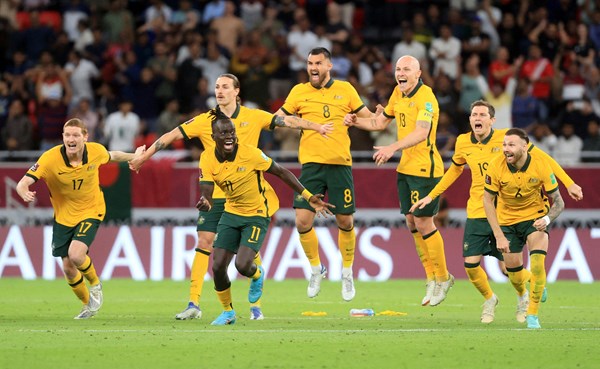 Kuala Lumpur (DPA)
Sheikh Salman bin Ibrahim Al Khalifa, president of the Asian Football Confederation, congratulated the Australian team on becoming the sixth Asian team to qualify for the 2022 World Cup in Qatar.
The Australian squad qualified for the World Cup after beating Peru 5-4 on Monday-evening on 5-4 penalties, after completion of regular and extra time in a goalless draw in the international play-off game of the qualifiers.
In statements published today by the AFC on its website, Sheikh Salman said: “On behalf of the entire Asian football family, I would like to congratulate Australia on qualifying for the 2022 World Cup in Qatar.” “At the same time, we must commend the commitment of all 12 National Societies that participated in the final qualifying round, who successfully overcome all the obstacles they have faced over the past two and a half years,” he added.
The AFC president said of the World Cup to be held in Qatar from November 21 to December 18: “The AFC emphasizes that this is the time for the Asian continent, and there is no better way to emphasize this celebration than by qualifying a record six teams from Asia to the World Cup, for the first time in the tournament’s history.
He added: “The AFC’s Vision and Mission Framework, launched in Qatar in 2016, emphasizes our ambitions to ensure the success of Asian teams at a global level, and now we return to Doha with great ambitions to confirm clear development that has been achieved on the continent.” “I wish all our qualified teams, who are hosting Qatar along with Iran, Japan, South Korea, Saudi Arabia and Australia, all the best as they prepare to be proud of the Asian continent.”