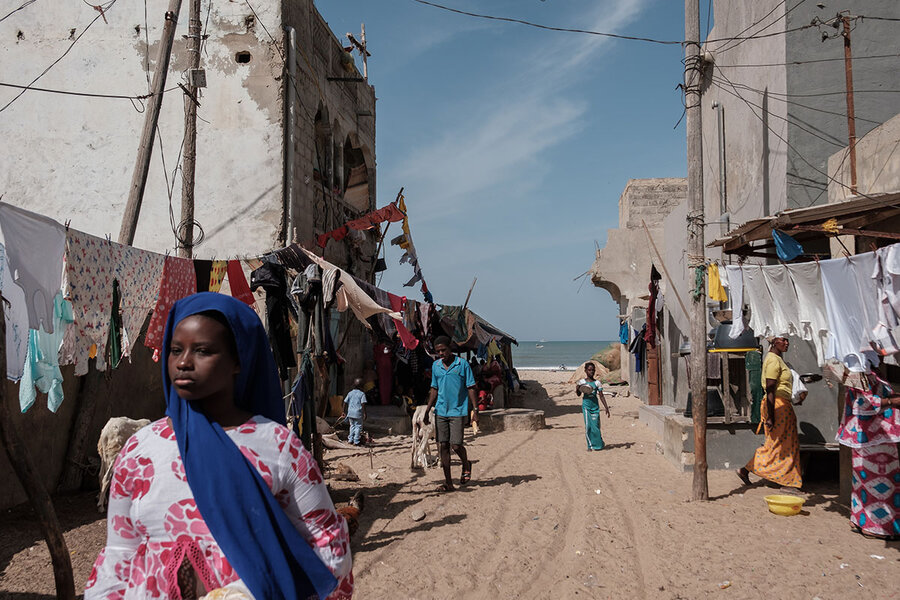 When Madické Sène was a child, the sands of the Langue de Barbarie stretched some 100 meters. Now the rising sea has swallowed much of the beach, including his 10-bed home.

It is a sign of how the climate crisis is already ravaging West Africa’s coastal cities. By 2050, some 113 million people across the continent could be forced to relocate because of the impacts of climate change, including rising sea levels.

Politicians are waking up to the reality of climate migration. Senegal could provide a blueprint for how coastal African cities could cope with the complex task of relocating citizens from places that have long provided economic opportunity and emotional ties.

In Senegal, some 3,200 residents of the peninsula that is part of the historic city of Saint-Louis have been displaced. Tens of thousands more will be affected by 2080, with one study predicting that 80% of the greater city area could be flooded.

Some 12 kilometers inland, the government has built a displaced persons camp as a temporary replacement for a new village. But inhabitants of the peninsula, like Mr. Sène, have no desire to leave.

“I was born here and I will grow old here,” he says. “The ocean is what we know.”

Of the only 1,500 residents of Diougop, the temporary camp, Ndeye Coumba Gueye has taken a state-funded cosmetology course — one of many sweeteners aimed at convincing people to move there.

“My hope is that when the [permanent] houses will be built, there will be people… coming to live here,” she says.

While Madické Sène grills some crabs he caught earlier in the morning, he stares out at the calm morning waters of the Atlantic Ocean.

“When I was a kid, it stretched all the way out there,” he says of the beach, pointing past a handful of brightly colored fishing boats some 300 feet in the water. Now, as he sits on a mat laid out on a newly constructed sea wall, the waves roll just 25 yards away at high tide.

His mat, the grill, the crabs, the fabric he has stretched over his head to provide shade from the sun – all this is on top of his ten-room house, engulfed by a particularly bloated sea in 2018. Behind him lie the remnants: the last standing bedroom, a bathroom and a wooden animal pen for his sheep.

Politicians are waking up to the reality of climate migration. Senegal could provide a blueprint for how coastal African cities could cope with the complex task of relocating citizens from places that have long provided economic opportunity and emotional ties.

Mr. Sène’s attitude is emulated by his neighbours. They are the scars left over from rising sea levels on this coastal peninsula known as the Langue de Barbarie, part of the city of Saint-Louis, some 220 kilometers from Senegal’s capital, Dakar.

About 3,200 residents of the peninsula’s busy fishing district, Guet Ndar, have been displaced by the increasingly unstable seas, which have at times flooded the entire peninsula to the point where the ocean on the other side flows into the Senegal River. In response, the government established temporary camps for displaced persons 12 kilometers inland in 2019. It plans to eventually replace them with a newly built village.

Madické Sène stands in what remains of his home, pointing to the beach just a few feet from the front door at the Langue de Barbarie in Saint-Louis, Senegal, November 1, 2022. Most of his home was swept away during a major storm in 2018 that destroyed dozens of houses and a school.

“I was born here and I will grow old here,” he says. “The [ocean] air we have here does not exist anywhere else. We can’t farm, we can’t do anything else – the ocean is what we know.”

The Senegalese government balances two goals in its fight against the damage caused by climate change in Saint-Louis. Mitigation projects aim to save as much coastline as possible for as long as possible, while at the same time preparing the government for the eventual disappearance of the peninsula. Citizens also face a juggling act, as they try to imagine – or resist – a life that differs from their cultural and economic identity as fishermen.

“We get it — that’s their natural home,” said Ousmane Ndiaye, a social inclusion expert at the Municipal Development Agency, one of the Senegalese agencies leading permanent housing construction with the World Bank. Negotiations will continue as long as necessary, he says. “That is a common problem in almost all displacement projects.”

The effects of the climate crisis are already playing out in the coastal cities of West Africa, from Lagos to Abidjan. They have long been a magnet for economic opportunity, but they are also some of the most densely populated areas. By 2050, some 113 million people across the continent could be forced to relocate because of the impacts of climate change, including rising sea levels.

The remains of a shoal destroyed by waves during a storm in 2018 in the Langue de Barbarie in November 2022. A seawall built shortly after the storm provides some protection for what was left on the beach.

Saint-Louis, famous for its pastel colonial architecture, is likely to be hit hard. Composed of a peninsula, an island and a busy mainland, today nearly 12,000 residents are at risk of displacement as sea levels rise and the coastline erodes. Some 150,000 people are likely to have to move by 2080, according to one study, with 80% of the city at risk of being submerged in annual flooding.

Mid-rise walls adorn new riverside promenades under construction on the island and peninsula, both of which sit precariously just above sea level. The seawall at Mr Sène’s house has significantly reduced the effects of storm surges, residents say. But even with that protection, residents remain displaced. Government evacuation orders are not being carried out. Instead, almost everyone who has moved has done so because it was their last resort.

About 1,500 of those former residents of the peninsula now live in stark, temporary housing at the displaced persons camp called Diougop. The tent-like houses have small solar panels, but no storage capacity. Bathrooms, toilets and taps for running water are common. A few people sell vegetables along the sterile rows of houses, but jobs are scarce.

A girl with water on her head walks through Diougop, a small, temporary town built by the Senegalese government for displaced people. All 1,400 residents came from the lively coastal suburb of Langue de Barbarie in Saint-Louis and found it difficult to adjust to life in the inland camp.

“There’s nothing here,” says Mamadou Gueye, a resident who moved to Diougop last year. Like many camp residents, Mr. Gueye still fishes, but now he is forced to commute to Guet Ndar by slow buses or expensive taxis, journeys that can take up to two hours in poor traffic.

“It’s difficult. The family is back [in Guet Ndar] – the community, family, friends,” he says.

More homes – and improvements – are on the way. A market will soon be held on an empty field, where football is now being played. More land is planned for a school. Some residents have already plotted a new life.

“It’s great here. It was great when we lived in Guet Ndar too, but we didn’t have a job that looked like this,” says Ndeye Coumba Gueye, as she braids her colleague’s hair in a salon set up in a shipping container Ms. Gueye, who was unemployed in Guet Ndar, took advantage of a state-subsidized cosmetology course with her friends — one of many ideas the Senegalese government has put forward to sweeten the deal of moving. took a job in a corner shop – also set up in a shipping container – or plant vegetables in a micro garden.

“My hope is that when the houses are built, people from Guet Ndar will come and live here,” she says. “Guet Ndar is busy, there is more space here.”

Ms. Gueye’s comments touch on the Catch-22 facing Diougop: More people living here can bring more jobs and a sense of community. But nobody wants to move here before that happens.

Mamadou Gueye, a fisherman who commutes 2 hours a day to the Langue de Barbarie, will be standing in the doorway of his temporary home in Diougop in November 2022.

Support programs, such as the esthetician course, have helped some people adjust. But they are far from being a pull factor that motivates people to move if they don’t have to. On the contrary, many women who moved from Guet Ndar have become unemployed and can no longer dry or sell the fish that comes off the beach every day.

Even among those more optimistic about Diougop, the ocean retains its appeal. And it’s easy to see the peninsula’s seawall as contradictory. As long as it supports the sandstrip, it encourages people to stay – the same people the state is trying to convince to leave. But the limited preservation of the peninsula is also one of the few things that keep alive the limited hope in Diougop.

The sea took up most of the Michelle Gueye family’s home in 2019. She has since moved to her sister’s house in a different neighborhood, but commutes to Diougop for work. She plans to move there once permanent housing is completed next year.

“We can create togetherness here. We have already started,” says Ms. Gueye, who is not related to Mamadou and Ndey Coumba. “But I always go back to the Langue de Barbarie. My heart is there.”