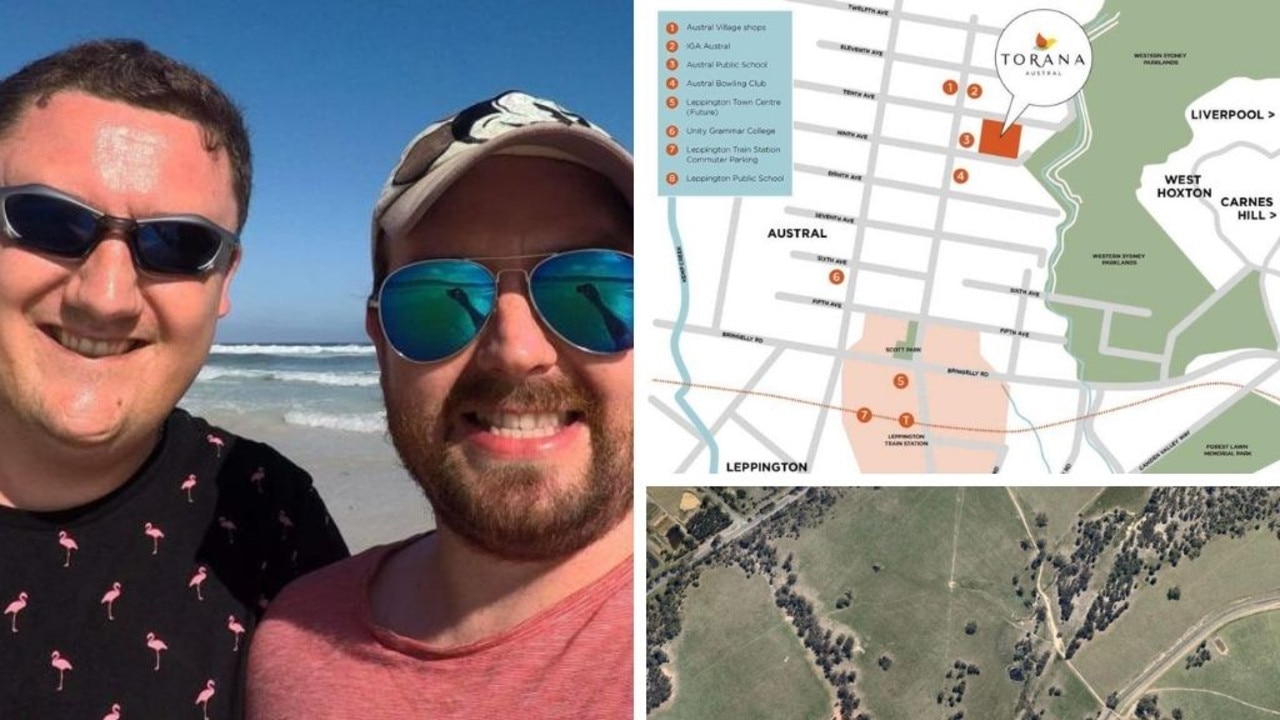 Dozens of aspiring home owners have been caught up in a bizarre situation in a new Sydney suburb, with none of them able to build on their land.

A couple who bought a land package as part of a new development in Sydney are terrified their dream home is slipping away forever thanks to a bizarre battle that has been going on since 2020.

Matt Pyatt and Michael Buckingham were excited to finally get a foot in Sydney’s notoriously expensive property market when they signed on to a development in the southwest suburb of Austral in February 2020.

No building can be done on the site as it’s not attached to a sewage system.

Mr Pyatt said that Sydney Water had promised the work would be complete by December 2020, but it has continually been pushed back.

Roads, street signs, NBN, gas and electricity have all been installed at the development, Mr Pyatt claims, but he has never got a straight answer from Sydney Water about the reasons for the sewerage delays.

Not only have the couple lost around $10,000 after canceling the contract with their builder due to the delays, but they believe they have also been priced out of building.

“I’m not sure if we will be able to afford to build a house on the land now. It’s more than likely we are going to look at selling the land and effectively have been priced out of the Greater Sydney market and will have to look further afield,” he told news.com.au.

“We paid a 10 per cent deposit which was $35,000 that will be returned us, but we are effectively now in an inflated market, with a deposit based on a market 24 months ago.”

However, the couple don’t currently have their name on the land because they can’t register it with no sewerage system meaning they face the developer invoking a sunset clause, taking back the land and reselling it next year.

They have watched as the land’s value has skyrocketed with Sydney prices up by 25 per cent, according to CoreLogic.

“Land prices have increased but … even if we made a profit on the land, we are literally back to square one and are left with a meagre deposit,” Mr Pyatt added.

The couple of are one of dozens who have purchased into the Torana Estate and are impacted by the sewerage issue with a Facebook group recently formed to offer support to each other. One neighbor is facing forking out an extra $50,000 to build due to the wait.

“For me and my partner it’s just us two and I feel like we have been through quite a lot,” Mr Pyatt said.

“But we have families who have moved deliberately to get children into schools that are having to do long commutes and even couples that have put starting a family on hold so with it continually being pushed back, there are so many heartbreaking stories we have heard. ”

The house and land packages at Torana estate began at $660,000 and were advertised as “enabling you to create the home your family has always wished for”.

The IT worker said they feel “deflated” by the situation after expecting to move into their new home by last Christmas, which was going to be a two storey, four-bedroom house with a bit of a garden, which Mr Pyatt said he had leg longing for after renting units for so long.

“It got to a point at the end of last year that it felt like we are flogging a dead horse,” he said. “It’s exhausting, we were just tired about it and felt like we weren’t getting anywhere and ultimately wasn’t worth the effort.”

The 34-year-old said it was also disheartening to still be paying rent alongside his 41-year-old partner.

“We want to be paying off our home loan, we don’t want to still be renting and we want to get it done so we can retire at some age and not have to work until we are 80,” he added.

Mr Pyatt said he knew they were taking on some risk for signing up to purchase land that did not have the infrastructure or their name on the land, but said they had a three-year contract as a safeguard and took Sydney Water’s “word at face value”.

“I think if had the same thing again I would be a lot more wary around what a large reputable company are telling you,” he admitted.

“It’s been a long time where literally nothing has happened.”

Mr Pyatt said Sydney Water had told them that the installation of the sewage system wouldn’t be done until October 2023.

Sydney Water’s general manager of Asset Lifecycle, Paul Plowman, said it has commenced construction on the Torana estate and are working to provide services by early 2023.

“We are working with the development industry to enable subdivision certification to allow execution of contracts and commencement of construction of homes as quickly as possible,” he said.

Mr Pyatt added that the developer has proposed interim measures to help the situation such as connecting to a private pipe owned by a landowner in the area or putting in temporary sewage tanks.

“Then every day a tanker would drive around and empty that tank and drive off and dump that sewerage, which just in itself is comical in Sydney for 2022,” he said.

But Mr Pyatt said that the problem isn’t only with Torana Estate.

“But there are other estates in the area that are at least equal the size of Torana so its going to start affecting hundreds of people if Sydney Water don’t get their act together,” Mr Pyatt said.

It’s a view shared by Chris Avis, the managing director at Infrastructure & Development Consulting, which works with both private developers and government.

He said last week Sydney Water had announced that there is no more sewer servicing available to Austral and parts of Leppington North until the proposed western Sydney airport’s Aerotropolis sewer treatment plant is operation in mid to late 2025.

“These precincts have been rezoned for over nine years and have recently been consistently delivering 800 to 1000 lots per year across a number of developers,” he said.

“Once the existing consents run through the system – all of which are probably already sold — there will be a complete halt to supply in this region until there is certainty on sewer services once again, leaving approximately 12,000 potential homes sitting there undeliverable.”

Mr Avis said it will force “mum and dads” looking for a home to look elsewhere with limited supply available from other estates in the south west like Oran Park, Turner Road, Willowdale and Emerald Hills.

“Ballots and hundreds of enquiries for a hand full of lots will be the norm once again, putting upward pressure on housing right at a time when Government needs it to be heading in the other direction,” he added.

Mr Plowman said delivering services to the Austral-Leppington area was a priority and it was actively engaged with the development community and local councils to deliver our infrastructure as soon as possible.

“Sydney Water remains committed to working with developers and landowners to deliver world-class water services and contribute to a thriving, liveable city,” he added.