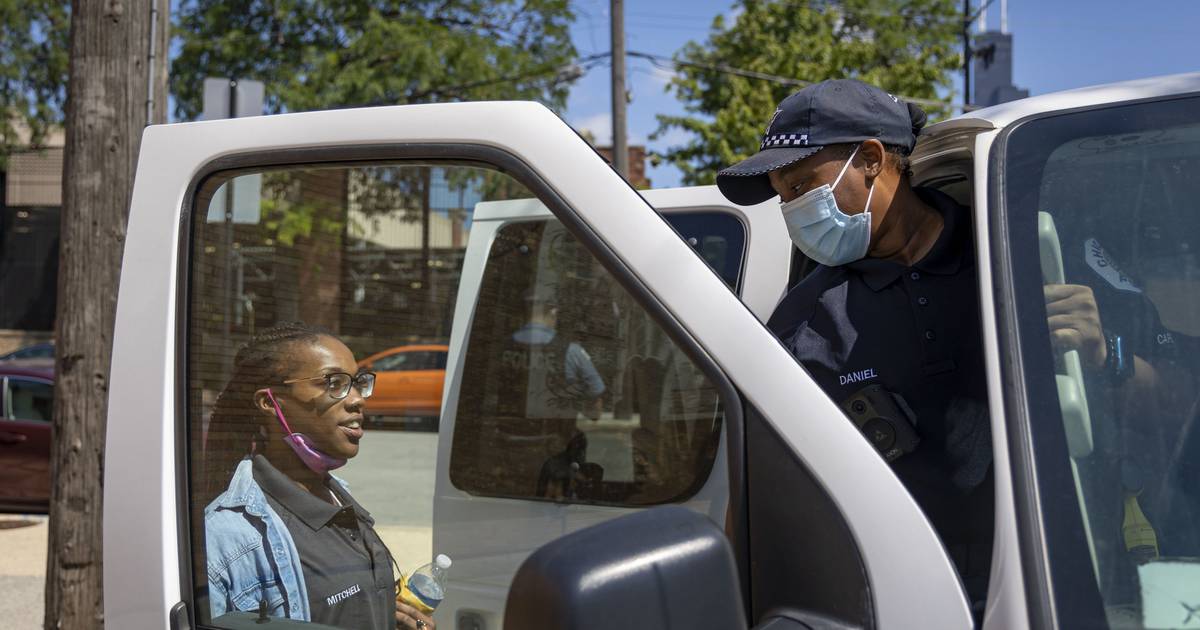 A coalition of activists wants to add a symbolic question to November’s vote on funding non-police responses to 911 calls over mental health crises.

The referendum would ask whether Chicago should reopen all closed mental health clinics operated by the public health department, and whether the city should support a team of mental health professionals to be sent to the mental health emergency calls instead. from to the police. Residents of the 6th, 20th and 33rd wards would receive the non-binding question on their ballots.

Proponents stood outside the Chicago Board of Elections during a news conference Monday before submitting their petitions for the vote, which sat in a column of rain-soaked boxes that read “DON’T TREAT TRAUMA.”

Diane Adams, a leader of Southside Together Organizing for Power, said she fell into a crushing depression when her son died decades ago. The symptoms worsened until she attempted suicide, and it wasn’t until years later that she began to heal with the help of a therapist.

“I’ve been able to get my life back,” Adams said, noting that others in Chicago deserve that same opportunity.

Sign up for The Spin to get the top stories in politics delivered to your inbox on weekday afternoons.

The city already has a pilot program for Crisis Assistance Response and Engagement — or CARE — launched last fall under the administration of Mayor Lori Lightfoot. CARE started using a co-responder model, so police officers are still involved in the pilot that was conducted in Lakeview and Uptown and in the Auburn Gresham and Chatham neighborhoods.

Last month, the city expanded the pilot program to include a third team — the first to operate without a police officer. That team is responding to calls in the Southwest Side neighborhoods of Chicago Lawn, Gage Park, West Elsdon and West Lawn.

As for mental health clinics, former mayor Rahm Emanuel closed half of them about a decade ago, and Lightfoot has not spoken out in support of their reopening. She has instead opted for numerous public-private partnerships to support out-of-town clinics.

While advocates for a no-police model for some 911 calls say that officers are not best equipped to de-escalate those suffering from a mental health crisis and that a police presence could work against them, others say that such situations are fleeting and that the lack of law enforcement could be dangerous.

ald. Rosanna Rodriguez Sanchez, who represents the 33rd ward where voters would be asked the question, said she recently visited Denver to talk about their Support Team Assisted Response (STAR) program that sends teams of mental health professionals — and no police – to with nonviolent calls. She said she believes a non-police response protects everyone, including officers.

“Right now the only tool we’ve funded is the police, and this puts people at risk,” said Rodriguez Sanchez. “It endangers communities and even the officers, it endangers them. So whoever tries to send the police to handle these things doesn’t even care about the well-being of those agents.”

Jhoanna Maldonado, a Chicago Public Schools teacher, said she has seen firsthand that people with access to mental health care can relax and heal from a crisis.

“It makes a world of difference,” says Maldonado. “This is the change we need in our city. Let’s stop blaming each other for the violent deaths and unarmed shootings of people in mental health crisis and let’s come up with solutions, real solutions, that we know work. That is justice.”