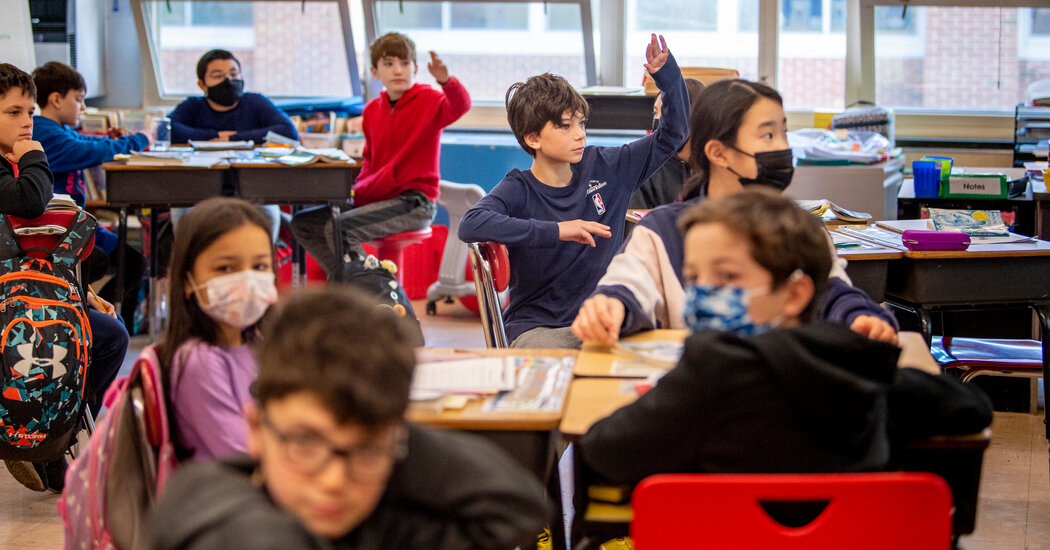 For the first time since schools reopened during the pandemic, Jordan and many other public school students across the state entered homerooms, gymnasiums and class without masks. Citing low virus caseloads and a desire to return to a sense of normalcy, Gov. Kathy Hochul lifted the state’s school mask mandate starting Wednesday, leaving mask policy to local officials.

But with low vaccination rates among minors and the threat of the coronavirus still present, if lessonsed, what once had been anticipated as a milestone moment was instead met with a mixed response.

From students to teachers to parents, the rush of fresh-faced jubilation on Wednesday was tempered by concerns: On one side was a belief that the order was long overdue; on the other was a fear that the decision was dangerously premature.

“It feels like Covid is kind of over, even though it is not,” said Jordan, 11, after first period began and the initial rush of masklessness wore off. “It feels like everyone just kind of gave up on it.”

With the statewide mandate lifted, local officials are now left to decide mask policy in their schools. In Nassau County, the Port Washington Union Free School District, which includes Guggenheim, leapt at the earliest chance to shed masks. But New York City’s one million public school students will have to wait until at least Monday, when Mayor Eric Adams has said he expects to lift the mask requirement.

As faces in the schoolyard at Guggenheim began to look as they did in the Before Times of the 2019 school year, the new protocols were met with emotions that ranged from elation to trepidation.

“I think it feels great!” said Mario Alfonso-Paz, 9, his mask in his pocket and dimples visible as he beamed between posters of Dr. Seuss characters in a Guggenheim hallway. “It’s like it’s finally over!”

But his mother, Silvia Alfonso, who put on a mask to enter the school lobby, did not share her son’s joy.

ms. Alfonso said she had hypertension and her husband had type 1 diabetes, preconditions that made them vulnerable to serious complications from the coronavirus. She fears her unmasked son could bring the virus home.

Throughout the pandemic, she said, they have told their children that “they have to put them on — for us.” She is allowing her son to go maskless but said: “I think it still wasn’t a good idea, because people are being infected.”

At Guggenheim, a number of teachers, some of whom are older and more vulnerable to severe illness from Covid, had expressed deep anxiety about removing masks, said the principal, Kimberly Licato. In the days leading up to the rule change, she had the school guidance counselor meet with some staff as well as students to help them cope with fears.

Michael Hynes, the Port Washington schools superintendent, also sent a video message to the school community forbidding bullying of those who continued to wear a mask. At Guggenheim some teachers said they had taught modules on tolerance to prepare the students.

With a teal N95 mask strapped tightly over her nose and mouth, Virginia McMahon, 59, a substitute teacher, lead a class of first graders — most of whom were unmasked — in the Pledge of Allegiance on Wednesday morning. Her mask would stay put, she said.

“Even though I’m triple vaxxed now, I just don’t want to take any chances,” Ms. McMahon said. “I think it’s prudent, for me.”

Even as New York relaxes its rules and states around the region announced plans to follow suit this month, the Centers for Disease Control and Prevention still recommends universal indoor masking in school settings for everyone age 2 and up.

Statewide, about 40 percent of children age 5 to 11 and just over three-quarters of children 12 to 17 years old have received one vaccine dose, according to data collected by the New York State Department of Health, though vaccination rates differ starkly by region and even among ethnic groups.

And children 4 and under — who are still ineligible for vaccines — have been overrepresented in coronavirus hospitalizations in New York, according to a study conducted in early January by the Health Department.

The constellation of factors has lead some health experts to call the decision dangerous. dr. Uché Blackstock, a doctor whose practice focuses on health equity, said that student vaccination rates — in particular in New York City, where they vary widely —- are the reason her children, city public school students, would remain masked. “Removing mask policies in these schools is dangerous,” she wrote on Twitter†

A new US strategy. The White House unveiled a virus response strategy that aims for a “new normal,” but much of it will need congressional funding. The plan includes a “test to treat” initiative that would provide antiviral medications to patients as soon as they learn they are infected.

Vaccine protection in adolescents. Five months after immunization, two doses of the Pfizer vaccine appeared to offer virtually no defense against moderate illness caused by Omicron among adolescents aged 12 to 17 years, according to new CDC data. Booster shots, however, dramatically increased the protection.

Others, like Dr. Lucy McBride, an internist based in Washington, DC, believe its time has come: She is part of a group of health care professionals who have pushed to end masking in schools since the Omicron wave began in January.

“Masks were always meant to be a temporary intervention,” Dr. McBride said. “We are having a hard time letting go of an intervention and a mandate that was perhaps appropriate at another time but doesn’t fit the current moment.”

The end of mandatory school masking has not ended the debate; the governor has left open the possibility that compulsory masking will resume if virus cases go back up.

In December, a group of 14 parents, most from Long Island, successfully sued the state over the school masking policy, saying the imposition of the mandate is beyond the scope of the state’s power. The case, which targets the mechanism that allows such rules to be made, is not affected by the rescinded mandate. It’s making its way through the New York State Court of Appeals.

“It was never about masks,” said Chad LaVeglia, a lawyer for those who are suing. “It was simply about giving parents the choice to make decisions for their kids.”

In Shannon Grennan’s kindergarten class, some children’s parents had sent her notes asking for her help in keeping their child masked; others had left it up to the children to decide.

Some of her 5- and 6-year-old students had flung off their masks with a thrill at the school’s double doors, but a few children who sat coloring at their desks were still masked. At one point, when Ms. Grennan taught a lesson on the weather, asking children what they would put on to stay warm outside, a hand went up: “A face mask!”

As students navigated their changed reality on Wednesday, the mask divide sometimes was present within a single family. Harris Baltch said that one of his children plans to wear a mask in school; the other won’t.

“This is definitely in many ways a welcome change, but we will see how it goes,” Mr. Baltch, 39, said, adding that he would have preferred waiting longer. “Hopefully they don’t start getting sick all over again.”

Nearby, Laura McEnaney rejoiced as she kissed her 11-year-old twins goodbye for the day and reminded them to keep their maskless chins up and look straight ahead. Both boys are special needs, said Ms. McEnaney, who has spoken out at school board meetings against masks. She has felt that face coverings had been detrimental to their ability to communicate and read emotions.

“I don’t think they should have ever been masked — ever,” Ms. McEnaney said. “This should have been done a long time ago, and I think the kids have suffered.”