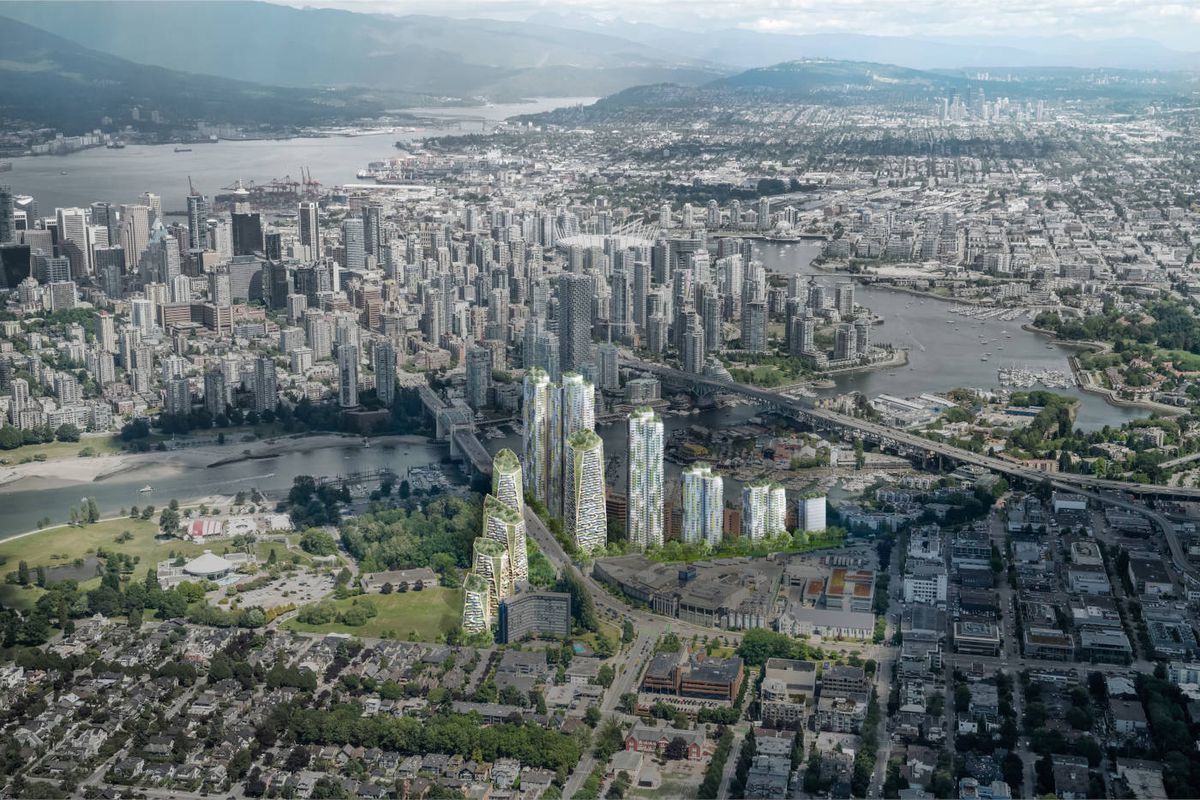 In the narrow strip of land bordering Vanier Park on Kitsilano Point, there’s little sign that it’s about to become the gateway to one of the densest neighborhoods Vancouver is likely to ever see.

The western part of the future massive development of Squamish Nation – 6,000 apartments, 10,000 people on 4.7 acres on the south side of the Burrard Bridge – is a tangle of blackberry bushes, with a path in the center leading to a small undergrowth next to the bridge.

That patch of Squamish land, currently behind a blue wire fence, runs between the parking lot in front of the 1970s Parkview Towers building and the parking lot behind the Vancouver Academy of Music.

There is also the unmarked part of the park which will become a narrow lane and will be the only road in and out of this part of the development. That lane empties into Chestnut Street and then drivers have to make their way through the small neighborhood of Kits Point to arrive at the Cornwall Avenue thoroughfare.

The park avenue is only a small part of what many observers believe will be one of the biggest challenges for the massive new Senakw development. Transportation for the thousands who live there, along with a cluster of commercial activities, is the central concern, say those who researched the recently signed services agreement between the nation and the city of Vancouver.

The Senakw development (and its associated service agreement) is unique not only to Vancouver but to North America, as it will be built on land designated as First Nations reserve land after the Squamish settle one of their historic settlements in a lawsuit. 2002. (They had their land taken, and residents were deported to North Vancouver by barge in 1913.)

That means the nation is not bound by city rules, zoning ordinances, or statutes, beyond what is stipulated in the service agreement, unlike nearly all other major First Nations development sites on the Lower Mainland.

The development, which will have the same number of apartments as the area around the Olympic Village, but occupy one sixth of the land, only need to comply with what is stipulated in the services agreement.

The recently released 250-page agreement for services says the nation must pay $15 million to study and build a transit hub on the south side of the bridge; another $5.7 million to improve biking and hiking connections; $4.7 million to upgrade an intersection that will be the entrance on the east side of the development at First and Fir; and $6.27 million to build the new road in Vanier Park. No prize has yet been awarded for the required plumbing-sewerage upgrade.

The agreement also states that the nation must “take reasonable steps to catalyze a streetcar in the area” and the same for a water taxi stop at the development.

“The Squamish called our bluff. We’ve said we need to move away from a car-dependent society and they’ve said, ‘Okay, here you are,’ noted Gordon Price, a former Vancouver city councilor who has been a transit and bicycle lawyer for decades.

But he warned that the current agreement seems to contain remarkably little data to show that future residents will be willing to make such a radical change in the way they move.

“Where are the studies?” said Mr. Price, noting that there is nothing in the service agreement or other public information about the development to indicate that TransLink has a plan for what will be needed in the area, or that city engineers have carefully studied likely travel patterns, including how many vans probably need to be accommodated.

And he noted that while the number of bicycle parking spaces seems high compared to other projects, there is still less than one space per unit and that this does not explain the phenomenal recent popularity of larger and heavier electric bicycles and cargo bicycles.

The Senakw development has a similar density to what is being built at the Oakridge mall, said Howie Charters, vice president of advisory services at Colliers International in Vancouver. But that project is on a metro line and has three major arteries next to it.

“In Kitsilano it’s just residential streets all around.”

But those planning the Senakw development believe they are creating the kind of urban neighborhood that many have said they want for Vancouver’s future.

“We are looking at a more green city and we are looking at fewer cars on the road. We are confident in the direction we are taking,” said Squamish Nation spokesman Wilson Williams.

Williams, TransLink and the City of Vancouver all say they are working together on the changes that will be needed for transit routes, roads, nearby intersections, and hiking and biking trails.

“City personnel will engage residents in how best to integrate potential transportation changes into the surrounding community,” said a statement from the Vancouver communications department.

A statement from TransLink said the agency is “working with Sḵwxw̱ ú7mesh Úxwumixw (The Squamish Nation) and the City of Vancouver to ensure the Sen̓áḵw development is well served by transit and connected to the regional transportation system. We welcome and support the prioritization of efficient green transport options for the residents of the future development.”

The first phase of the development, the part in the Vanier Park, is due to start digging this fall, with commissioning by the end of 2026, according to the services agreement. The next three phases, east of the bridge, will begin after that, with the final phase commencing in 2025 and scheduled to be commissioned in the fall of 2029.

But local residents, alarmed from the outset about the high density of the project, say they are very frustrated at the lack of information and that what they fear will become a future transportation nightmare for their small neighbourhood.

One group is also particularly concerned that the federal government recently signed the permit authorizing the Squamish to use the northern edge of Vanier Park, which it owns, for a road to service the development.

Jeremy Braude is one of 340 people in his No Road Through Vanier Park group. They argue that parks should never be surrendered to what is essentially an advanced developer, trying to maximize what it can build while also getting free park space for a road.

Braude and his neighbors plan a rally to protest the move and try to get Vancouver’s many mayoral candidates to take a stance on the issue.

“And our ultimate hope is for the developer to take a break and listen to some issues instead of the steamroller approach.”

In addition to the transportation issues, the services agreement sets the annual city taxes that the country must pay for the property — which is now slated to be all rentals, 20 percent of which are at lower rates, with a small amount of commercial space.

The Squamish will have to pay 100 percent of normal city taxes, based on the estimated value of the land, for police, fire, sewage, engineering and library services.

The development, which has reserved just under half of its land for open space, will also pay 50 percent of normal taxes for parks and 75 percent for arts, culture and community services.

The country does not have to pay the portion of taxes that normally go to planning or support the municipality, two items that make up about four percent of the city’s total budget.

Mr Williams said everyone in the city will eventually benefit from the project.

The Senakw project, along with the major Jericho Lands development in the west jointly developed by the Musequeam, Squamish and Tsleil-Waututh First Nations along with Crown Corporation Canada Lands, will provide a strong population for a metro line in the west, he said. And the project will provide a huge amount of needed housing.

“It’s not just the highest and best use here. Some of the apartments are subsidized. That’s what’s best and how we can work with the city.”

We have a weekly newsletter for Western Canada, written by our bureau chiefs in BC and Alberta, with a comprehensive package of news you need to know about the region and its place in the problems facing Canada. Sign up today.