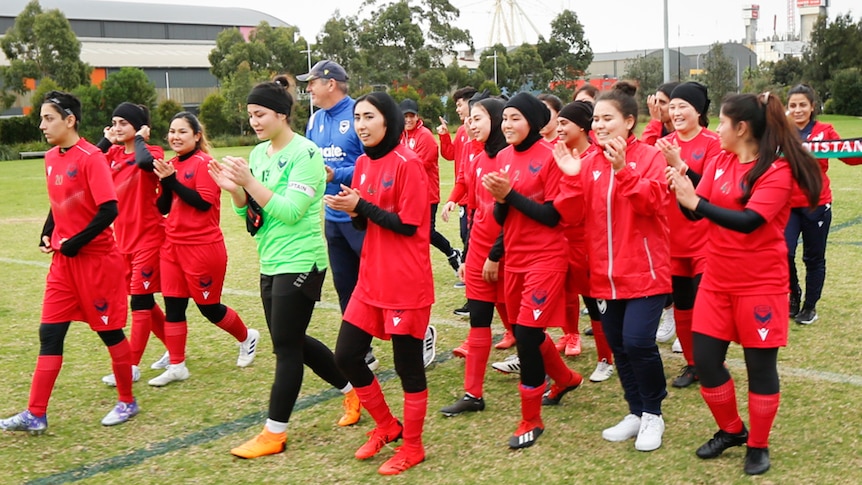 More than 11,000 kilometers from Kabul, Afghanistan National Women’s players have returned to their beloved football game.

The stage was set. An autumn Melbourne afternoon, early May, with rays of hope from the sun peeking through the clouds in a suburban park, far from the lights of larger stadiums.

Human rights lawyer and former Socceroos captain Craig Foster has assisted the women in their move to play in Victoria’s State League Division 4 West under the banner of the Melbourne Victory Afghan Women’s Team.

“Teams like this amazing team from Afghanistan are incredibly important because they represent tens of thousands of refugees who have no voice,” said Foster.

“They know that every time they kick a ball here, every time they score a goal, every time they even walk on the field with a smile and enjoy their basic right to play sport, they are punching all women and girls … in Afghanistan. They are a battle for women’s rights around the world.”

There is so much more at stake for these women than winning football as they have given up so much to shift their livelihoods for a chance to just play in what is now considered a home away from home.

“The fact that they are footballers gives them the opportunity through sport to tell their story,” Foster said.

“It gives them the chance to talk to Australians. And getting to know and love this team will also help us think better about what we do with other refugees.

“So this team is incredibly symbolic of so much that Australia needs to change.”

Foster, along with Football Victoria, A-Leagues National Champion Melbourne Victory and an extensive network of supporters have helped create an environment for the women and girls to integrate with Australian life on and off the pitch.

“If they were there today, they would be at extremely high risk, they certainly wouldn’t be able to play, nor go to college, or for some of the young people, not even go to school,” Foster said.

“These women and girls, along with the vast majority of other Afghans who came, came without family, fleeing under conditions where there simply weren’t enough visas to travel around.

“And so those who were most at risk were helped. I had to explain to this team that they couldn’t take all their families, and that’s a terrible place to be, both for them and for those who are trying to help them.

“Those two entities (Melbourne Victory and Afghan NWT) are creating something incredibly important here, not just for these women’s or women’s rights around the world, but really for Australia’s future to accept and understand all refugees and be humane.”

The unbreakable bond for the Afghan sisterhood

Playing from a field in the aptly named Ron Barassi Senior Park – named after someone who died in Tobruk putting his life on the line and inspiring others – the side has stuck together where they can to make the most of their newfound opportunities .

For this group of Afghan women and girls, rather than moving separately, forming a stronger sisterhood is much of the comfort of home.

Mursal, a defender, said the most challenging was feeling the effects of separation from loved ones.

“The most challenging is: [our families] that we are alone. We also have to study, we have to work to support our families in Afghanistan,” Mursal said.

“If you have your family, they are your first supporter in any situation. If you’re bad or you’re good, they’ll say, ‘It’s okay, next time’.

“The football field is the only place where we can forget everything, like those bad experiences we had in airports or in Afghanistan. We can forget that we don’t have our families too.

“If you don’t have them, it’s so hard. And instead of them we have our second family, that’s our team. We’re like a family together, unbreakable.”

Mursal knows that as long as she plays with her teammates on the pitch, they can continue to speak out for those who can’t.

“We can be a voice for those who have no voice in Afghanistan. We can fight for their law,” she said.

“We want to tell the world: Please support women in Afghanistan. Every woman in Afghanistan has their own talents and they are only as talented when you give them opportunities.

“I love my country, I love Afghanistan and I hope that one day our country will be free and that all girls can get better and that they will have their own choice.”

Reserve goalkeeper Montaha continued to hope that her family could one day share Australia’s liberties.

“Most of us are upset because our families are also in Afghanistan. Most of our girls are here alone. It’s very hard for them.

“I miss my family. They are still in Afghanistan and they are no longer here to support me.

“We hope they come here too and one day they will be here with us.”

Perhaps it is appropriate for the team to play under the Bolte Bridge; iconic for connecting Melbourne’s communities.

Jeff Hopkins, manager of A-League Women’s champion Melbourne Victory, has taken on a wider commitment to lead the team and says the club is doing its best to support the women and girls on and off the pitch.

“We try to give them everything we give our A-League women’s team.

“We saw people in need… it’s the Australian way to roll up your sleeves and fill in.”

By placing the players alongside the Australian elite, Melbourne Victory director of football John Didulica said it was important to change the way Australians view refugees and asylum seekers.

“We have to put these women on a pedestal. One of the sensitivities that runs through our treatment of asylum seekers and refugees is to put them in the back of the queue, pick up the leftovers, last at the buffet.” said Didulica.

“What we wanted to do was turn that around and make sure that the courage, the determination, the courage of not just these women, but asylum seekers everywhere can be recognized and actually put at the front of the queue. No longer in the back. †

However, the team’s return to the world stage remains unclear as FIFA has yet to allow the side to compete as an international team in exile.

“We wanted to provide them with the best possible program so that they can once again achieve that ambition to play on the international stage, and that’s what we want to do,” said Didulica.

“The entire football community should be proud that we are able to provide opportunities like this to the most vulnerable members of the community.

“It’s the foundation of why we are such an incredibly successful multicultural nation. Football’s ability to create a safe space for these communities, but then have them partner with other communities to set up games like today , is the hallmark of what football has brought to this country.

“What we’re doing here with the Afghan team is no different than what happened in the 50s, 60s and 70s when communities helped bring all these newcomers to this beautiful country.”