The top military officer in the US has warned it will be “very, very difficult” to drive thousands of Russian troops out of war-torn Ukraine as the devastating conflict enters its 12th month. US General Mark Milley reiterated his concern that Russian President Vladimir Putin’s aggression would not end this year. On Friday, he told … Read more They talk tough. They look tough. But Russia’s “elite” mercenary wants to go back to prison. And they are executed for it. The convicted rapists, drug dealers and murderers are cold, hungry and unpaid. And they are eager to tell their Ukrainian captors about the public executions of their former employer. “Those who disobey are … Read more

KYIV, UKRAINE: Ukraine on Friday said it was resisting a “high intensity” Russian offensive in Soledara city in the eastern Donetsk region where Kiev claimed Moscow was deploying more troops.“It was hot in Soledar last night. Hostilities continued. The enemy moved almost all its main forces to the Donetsk front and is carrying out a … Read more Footage released by Ukraine’s state border guard on Thursday (January 12) is said to show Ukrainian soldiers fighting in Soledar, the eastern city that Russia claimed to have taken over on Tuesday (January 10) – something Ukraine denies. US President Joe Biden said Russian leader Vladimir Putin’s order for a two-day Orthodox Christmas ceasefire in Ukraine was simply an attempt to find breathing space for his war effort. “He was ready to bomb hospitals and nurseries and churches” on Dec. 25 and New Year’s Day, Biden said, adding, “I think he’s trying to … Read more

With the war in Ukraine turning into a protracted, bloody battle, Ukrainian and Russian officials are ready to talk about making peace amid harsh demands from both sides that “serious negotiations” slim down in the near future. Peace plan and “lukewarm” response On Monday, Ukrainian President Volodymyr Zelensky renewed talks about his 10-point peace plan … Read more 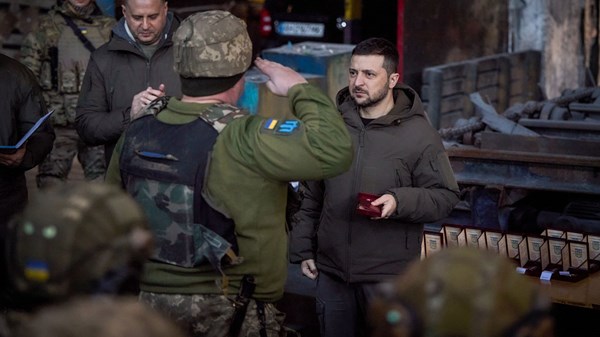 December 20, 2022 10:59 PM Ukrainian President Volodymyr Zelensky on Tuesday visited Bakhmut, a city that Russian troops have been trying to capture for months and is currently the hottest point on the frontline in eastern Ukraine. Ukraine. The unannounced visit came as the Kremlin announced that Russian President Vladimir Putin will “convene an expanded … Read more In detail, the military administration in Kiev announced the downing of 9 drones, which it said were “Iranian-made”, in the early hours of Monday morning. She explained that the marches were shot down as they flew into the skies of the capital Kyiv, following Russia’s latest attack on the city, according to Reuters. Witnesses reported … Read more

Russian troops who were moved to Belarus in October to be part of a regional formation will conduct battalion tactical exercises Russian interfax The news agency reported this on Monday, citing the Russian Ministry of Defense. “The final assessment of the combat capability and combat readiness of the units will be given by the command … Read more