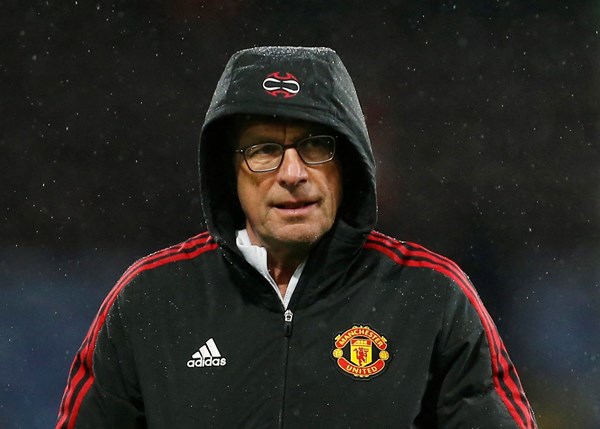 Manchester United interim coach Ralf Rangnick said ahead of his last Premier League game on Sunday that his biggest disappointment during his tenure at Old Trafford was the club’s lack of team spirit.
Rangnick’s team are sixth in the league with 58 points, two ahead of seventh-seeded West Ham United, and must win at Selhurst Park to secure a place in the European League next season.
Rangnick, who will captain the squad for the last time on Sunday before Eric ten Hag takes over next season, said United had lost confidence after being knocked out of the Champions League by Atletico Madrid in the last 16.
“Until that confrontation, the team was stable,” Rangnick told reporters on Friday. Defensively, the situation was more stable. Since we have faced Atletico, we have stepped down from our level. It is about trust, team spirit and teamwork. This was the biggest disappointment for me because the club lacked team spirit.
The German coach, who will switch to an advisory position next season, says he is in contact with the new coach, Ten Hag. British media reported that Ten Hag is expected to attend Sunday’s game.
“We’ve been in touch via WhatsApp,” Rangnick said. We hope to be able to speak and meet in person by the weekend or Monday at the latest.
In response to a question about United’s future, Rangnick said he was confident the club would spend the money necessary to attract the right players in the upcoming transfers.
“I still strongly believe that there is a group of players who have the quality to play for this club,” he said. “If we attract the right players, especially in terms of mental strength, I’m sure we can bring this club back to the top,” he added. That may not work in one transfer window, but in two or three periods.
Rangnick said there were doubts about some players’ participation in Sunday’s game, which saw Jadon Sancho and Phil Jones withdraw from training.
The coach added that Luke Shaw may stop training for Sunday’s game after his life partner gave birth to their second child.
United will finish the season with the lowest points total in the Premier League era, regardless of beating Crystal Palace.