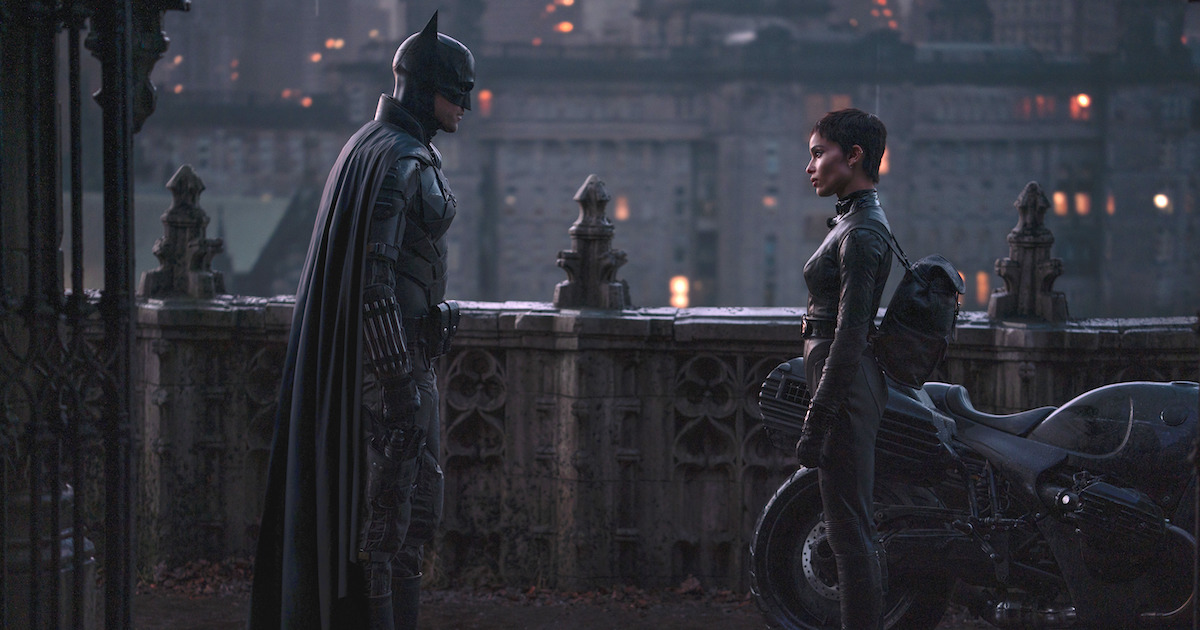 In one of the opening scenes of the movie, this Robert Pattinson incarnation of Batman reveals that he doesn’t self identify as Batman — he, announcing directly to camera in a five star bat growl, “is Vengeance”.

That mission statement evolves over the two hour and fifty six minute run time, forged in plotline fire and by a sense of duty to what sort of Batman, Gotham needs him to be.

You’ll likely hear lots of references to this being a much darker caped crusader caper, but that tells us nothing. Batman stories are ncessarily dark — our hero works a night shift, and one that brings him into the orbit of enemies that are almost exclusively (like the protagonist) mortal, and super only in terms of the extent of their psychopathy. That proximity to the world we inhabit is part of what has always made Gothamscapes so chilling.

Matt Reeves’ vision picks at these human elements, the frailties of characters, their limitations and cleverly layers depth to villainous conviction. when What’s On spoke to The Batman producer, Dylan Clark he said “the best movies always have those dichotomies inside of characters … we always tried to find the best in the worst of the worst people. A lot of movies miss that step, of trying to find out why that bad guy is how he is.”

As Bruce Wayne, Pattinson shifts around in transfixing ennui, practically broken by the chaos and corruption he sees around him. “Where we begin with Bruce” Pattinson told What’s On “it’s a very destructive road he’s on, he’s accepted ‘ok I’m probably going to die doing this, but if I don’t do it, I’m dead anyway”.

His bat costume too, is much downgraded, and relatively fragile in comparison to the pseudo mech suits seen in the recent Snyderverse outings, but it is a thing of visceral gothic beauty. The tech at his disposal is rooted in the real world, the laws of physics are largely observed and all of this contributes to an already inescapable sense that a very different sort of dynasty is beginning here.

What makes this a great Batverse?

The Batman Reeves and Pattison give us, has declared a war on all crime, with duties split between street vigilantism and being an emo Hercule Poirot. Whether you’re stealing purses or scattering encrypted breadcrumbs on a macabre homicidal treasure hunt, he’s coming for you.

And he is super too, but only in respect of his deductive reasoning, and being pretty handy when it comes to a round of asymmetrical fisticuffs.

For above all, this is a detective story, told through the panels of a neo-noir mobster movie, with a framework that artfully services comic book authenticity.

A story that at times feels like a Greek epic, Homerian and character-driven, with a flawed hero letting us ride shotgun on his metamorphic rampage towards destiny. The film carefully crafts parallels on either side of battlelines and showcases some outstanding acting performances along the way.

Battinson is a stroke of casting genius; Zoë Kravitz provides an expertly sold Selina Kyle (Catwoman), one that is far more three dimensional than any we’ve seen before; Colin Farrell borderline steals the show as The — heavily made-up — Penguin; John Turturro is faceted, almost Soprano-esque in his adaptation of Carmine Falcone; and Paul Dano’s methodical take on a Zodiac Killer-style Riddler represents nothing less than a revolution in comic book villain acting.

It’s filled with fan acknowledging easter eggs; spectacular action choreography (there’s one close-quarter fight scene illuminated solely by the intermittent flare of submachine gun that is just, one of the best combat sequences we’ve ever seen); a Batmobile car chase that ranks up there with the Bourne movies for jarring, edge-of-seat realism; a 90s Seattle grunge soundtrack that is a perfect paramour to the on-screen visuals; and a final scene cameo that leaves you petulantly impatient for a sequel.

And we might be getting much more than that, when speaking to What’s OnMatt Reeve told us “there was a point, with the movie where the script was getting longer and longer, and I thought, this would have been an amazing series about year two Batman, but they were like — you gotta do the movie first … so we have plans for that as well, but I can’t tell you how much of it will come to fruition, that depends on how the audience connects.”

We have a very strong feeling that audience connection, will not be a problem.

The Batman is in theaters across the UAE now, you can find your tickets here.