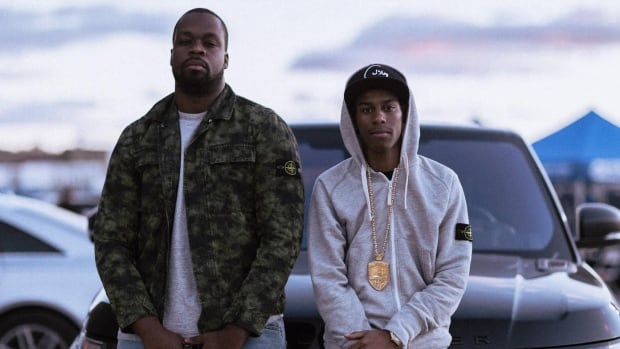 Sobbing from the witness box, the mother of murdered rapper Jahvante Smart lashed out at her son’s killer during his sentencing hearing Friday, telling convicted murderer Abdulkadir Handule that his actions have torn her family apart.

“Your parents can still hear your voice and visit you. I will never get that chance,” said Pamela Bent, mother of 21-year-old Smart, who was also known by his stage name Smoke Dawg. “Instead, I have to visit my son at his grave and talk to his tombstone, because of your senseless act.

“I’m damaged by you – and my wound will never heal. God said we should forgive people, but I will never forgive you for what you did to my son. The day you killed my child, you killed me too The only thing difference is that I am still on earth and suffering because of you.’

Bent was one of several people to make passionate statements about the impact of victims during Friday’s hearing in Toronto’s Superior Court, in an effort to ensure Judge Brian O’Marra learned that their lives had been changed forever.

In February, a jury found Handule, 26, guilty of two counts of second-degree murder, as well as aggravated assault and firing a firearm in connection with the 2018 shooting of both Smart and fire manager Ernest Modekwe, 28, who was well known in the hip-hop scene of the city.

Both men were gunned down in Queen Street West, where it was bustling with people nearly four years ago over the Canada Day weekend on June 30.

Smart suffered three gunshot wounds, the court heard — one to his neck and two to his leg. Modekwe was once shot in the neck. One woman, who was a bystander and shot in the leg, survived.

‘My soul is crushed’, says mother

In written statements to the court, Modekwe’s father, Okwii, and mother, Thessy, described the litany of health problems, including depression, anxiety and stress disorders they endure after the death of their son.

Thessy Modekwe also said she was diagnosed with breast cancer not long after her son’s death. Every day is now an uphill battle, she said.

“It still doesn’t feel real to me. Every day I close my eyes and pray that this is all just a nightmare, and that my son will return home – and every day I’m reminded that he’s gone, and I will never see him again,” she said.

“My soul is crushed.”

“My brother was my biggest advocate for making sure I had everything I needed to get by. He always made it his responsibility to advocate for my needs in every space – at school and in society. He was my biggest supporter,” he said. “He accepted and loved me for who I am and encouraged me to be proud of who I am.”

Now his lawyer is gone, leaving a gaping hole in his life.

“What has been done to my family is despicable,” he said.

Defense asks 15 years before they qualify for parole

Second-degree murder in Canada comes with a mandatory life sentence with no chance of parole for at least 10 years. O’Marra previously said he would consider a jury recommendation in determining the length of Handule’s sentence before being eligible for parole.

The defense is demanding 15 years before they are eligible for parole. The Crown, meanwhile, is demanding 20 years for the second-degree murder and seven years for the charges of aggravated assault and discharging a firearm with intent to injure, both of which must be served at the same time.

In his submissions, lawyer Dirk Derstine also provided letters from Handule’s relatives, noting how “shocking and strange” the shooting was for the first perpetrator.

He also pleaded with the judge to consider extenuating circumstances in the case, such as Handule’s age at the time, that he came from a marginalized and vulnerable neighborhood, and that Smart had actually drawn a gun and fired first, although Handule was not hit.

It would be easy to characterize Handule alone as a “violent monster” to be seen only on the basis of the crimes he has committed, his lawyer said, but “every human being is better than the worst they have ever had in their lives.” done. to live.

“He’s more than just the events that happened there,” Derstine said.