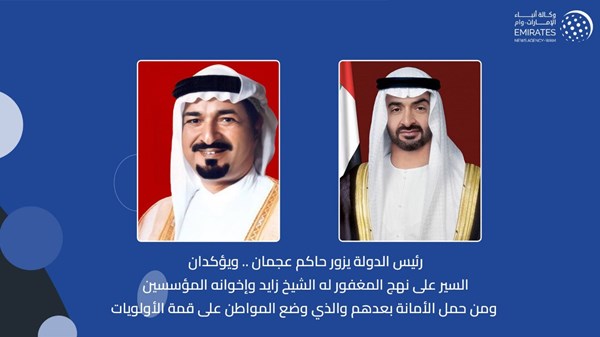 Today, Friday, His Highness Sheikh Mohamed bin Zayed Al Nahyan, President of the State, visited his brother, His Highness Sheikh Humaid bin Rashid Al Nuaimi, Member of the Supreme Council and Ruler of Ajman, as part of the authentic approach to communication and fraternal consultation that the rulers of the UAE have been eager to foster since its inception.
At the meeting, which took place in the Ruler’s Court in Ajman, Their Highnesses exchanged friendly fraternal conversations and wishes for health, well-being and happiness, in addition to addressing a number of issues pertaining to the affairs of the homeland and the citizen, stressing that the leadership of the UAE continues to follow the path charted by the late Sheikh Zayed bin Sultan Al Nahyan, may God rest his soul, and its founders and those who bore the trust after them, who placed the citizen at the top of the leaders’ priorities and made his empowerment and the achievement of his well-being and happiness a main goal and the focus of development plans during the various stages the country has gone through and the following stages, God willing.
Their Highnesses called on the Almighty to perpetuate the security, stability and prosperity of the UAE and to reconcile its leadership in working for the good of the country and its people.
The meeting was attended by HH Sheikh Ammar bin Humaid Al Nuaimi, Crown Prince of Ajman, HH Sheikh Nahyan bin Zayed Al Nahyan, Chairman of the Board of Trustees of the Zayed bin Sultan Al Nahyan Charitable and Humanitarian Foundation, and Lieutenant General Sheikh Saif bin Zayed Al Nahyan, Deputy Prime Minister and Minister of the Interior, and HH Sheikh Mansour bin Zayed Al Nahyan, Deputy Prime Minister and Minister of Presidential Affairs; Sheikh Abdul Aziz bin Humaid Al Nuaimi, Chairman of the Ministry of Tourism Development, Sheikh Rashid bin Humaid Al Nuaimi, Head of Municipality and Planning Department, Sheikh Saqr bin Rashid Al Nuaimi, His Excellency Sheikh Dr. Majid bin Saeed Al Nuaimi, Sheikh Humaid bin Ammar Al Nuaimi, and Sheikh Mohammed bin Ali Al Nuaimi, President of the Court of Ajman, And Sheikh Sultan bin Ali Al Nuaimi, and a number of sheikhs and officials.