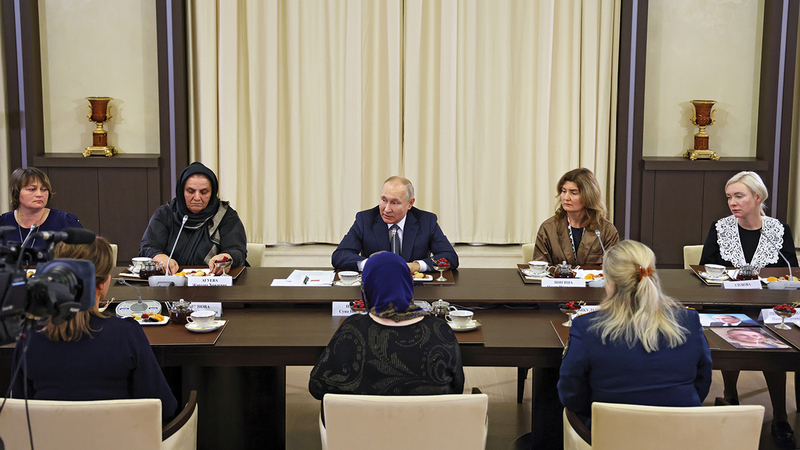 Russian President Vladimir Putin confirmed that he did not regret launching Russia’s “special military operation” in Ukraine. Soviet Union in 1991.”.

Russian President Vladimir Putin yesterday met with 17 mothers of Russian soldiers who fought in Ukraine and told those who lost children in the war that he and the entire Russian leadership share their pain.

Russia has sent hundreds of thousands of soldiers to fight in Ukraine, including some of the more than 300,000 reservists called up as part of the mobilization Putin announced last September.

Putin met the mothers at his residence in the Novo-Ogaryovo region outside Moscow on the occasion of Russia’s Mother’s Day.

Putin said he understood the concern and fear of soldiers’ mothers and the pain of those who lost their sons in Ukraine. He continued, “I would like you to know that I personally and the rest of the country’s leadership feel your pain.”

He added: “We realize that nothing can compensate for the loss of a son, especially a mother… We share this pain with you.”

The Russian president paid tribute to the sons of today’s mothers who stood up for what he called “Novorossiya,” meaning “New Russia,” a Tsarist-era phrase used by Russian nationalists to describe the part of southern and eastern Ukraine to describe what Russia now claims.

Putin said he sometimes talks on the phone with Russian soldiers at the front and their words make them heroes in his eyes.

Mothers from all over Russia and from different ethnicities expressed their appreciation for his leadership and wished him well before speaking of their sons who had fought valiantly or died in the service of a noble cause.

The last time Russia announced its losses was on September 21, when Defense Minister Sergei Shoigu said 5,937 Russian servicemen had been killed. But this number is much lower than most international estimates.

In addition, the Ukrainian government began evacuating civilians from the city of Kherson in the south of the country, which Ukrainian forces finally regained control after Russian forces controlled the city for several months. Ukraine’s infrastructure ministry said 100 people were transported by train to Khmelnitsky in western Ukraine, including 26 children and six patients.

Under pressure from the Ukrainian counter-attacks, the Russian troops withdrew from Kherson in mid-November, but the Russians maintain positions on the other bank of the Dnipro River and fire artillery from there.

Ukrainian President Volodymyr Zelensky criticized Kyiv Mayor Vitali Klitschko for his poor performance in setting up emergency shelters to help people without electricity and heat after the Russian attacks, in a rare public spat between Ukraine’s leaders.

Zelensky noted that local authorities were not performing well in all cities. There are many complaints in Kiev in particular, and he also explained that more than six million homes in Ukraine were hit by power outages after two days of heavy Russian strikes and that later electricity supply gradually started to return.

In a related context, the Russian Defense Ministry yesterday announced the release of nine prisoners of war as part of a prisoner exchange with Ukraine.

The Ukrainian army announces that it has killed 86,000 Russian soldiers since February 24.