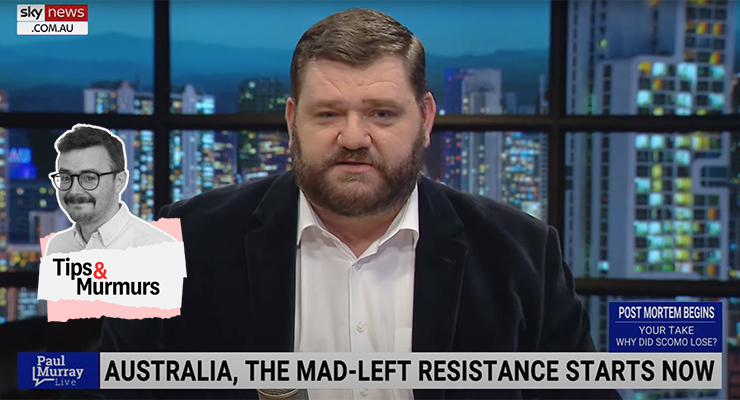 Resist I suppose we need to rethink our view of bellicose fact-dodging Paul Murray. We thought it was a cowardly and submissive love of power that made him beam to Donald Trump and ask, “What would you say to your many Australian supporters wishing you nothing but the best in November 2020?” He turned out to be a real partisan.

In recent days, he’s announced that he’s going to lead the (get this!) “resistance” to the “crazy leftists” on his show. Firstly, this is a fine example of how Labor can be as conservative and small a target as it wants to be, but there is something at the core of News Corp that is unrelentingly enraged at the idea that any other party has power than the Liberals.

Second, as dazzlingly foolish as the whole thing is: Paul, is it Labor’s commitment to tax breaks for high earners? His policy of returning refugee boats? His lockstep with the coalition on the right to strike? His refusal to commit to increasing the percentage of Job Seekers who most closely match lunatics left? – it may not be as harmless as it seems.

Murray is a prime-time host in an incredibly concentrated media market, thrown free to regional areas. He’s not hugely popular, but he’s attracting a huge crowd online – essentially invalidating the new government in days (he’s set a 1000-day countdown for Australians to “take back the country from the mad lefts”) isn’t normal, not even by News Corp standards for commentators.

The approaching aftermath Elections are truly the gift that political journalists continue to give. You get the very useful speculation, the searing analysis, the perfectly fair and necessary interrogation – they pour out in all directions into a large pool of contents a mile wide and an inch deep. And then, when it’s all over, you get the inevitable broken pieces of the lost side.

Say what you will about the apparent friendship between prominent journalists and politicians, someone should be the person to call and vent seven anonymous MPs furious at the loss of the government. This gives us yesterday’s piece “the liberals really wanted to roll Scott Morrison, but Josh Frydenberg was loyal to a mistake” in the Nine Papers – and then the response in The Australian that this story was “utterly ridiculous”.

No ifs or Dutts In August 2018, Peter Dutton launched a leadership challenge against then Prime Minister Malcolm Turnbull, stepping before the press with an ill-fitting smile and promising to show “another side” of himself. the Australian sprang into action and took a closer look at Dutton by writing a friendly profile detailing his family life, his “turnout and brawls” and how the “Brisbane Battler has always been willing to try”.

In the run-up to the 2019 election, when Dutton’s seat, by a narrow margin of 1.6%, appeared in jeopardy, (future Dutton media adviser) Renee Viellaris wrote in The courier post one of the most magnificent PR pieces in history, with his wife’s most glowing recommendation insisting that the then Home Secretary was “no monster”.

Now he has to become the opposition leader and… the Australian has Cntrl-C, Cntrl-V’d those conciliatory sentences in another profile with a family photoshoot stating that he terribly funny, and has only been able to show the side of himself that was needed through “tough” portfolios.

Tough does a lot of heavy lifting – there are no, shall we say, “African gangs”, the only remaining MP who boycotted the apology of the stolen generations, the illiterate refugees who steal our jobs, pregnant rape victims who “try by asking for an abortion in Australia, nor his failed lawsuit against a Twitter user. But given his track record, Dutton has always found the media willing to meet him at least half way through.