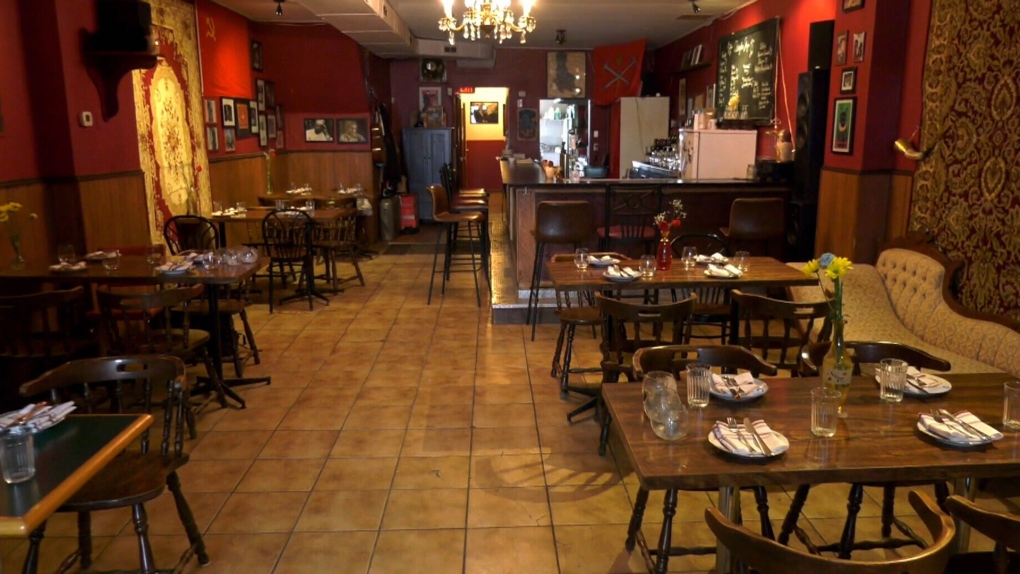 Outside ‘Stop’ restaurant on Dundas Street West in Toronto, a small sign on the door reads, “We do not support the actions of Vladimir Putin.”

Inside is a celebration of Russian culture and owner Denis Ganshankov wanted to make it clear that, while the local business celebrates the culture, they do not support the war in Ukraine.

“We certainly do not support what is happening in Ukraine,” Ganshankov said.

He said most of his customer base is of Ukrainian or Russian descent.

Ganshankov was born in Kazakhstan and has close ties to Russia today. He says business is down slightly and some of his staff have received critical messages, so there is concern of backlash.

Still, Ganshankov is donating money from his sales to support Ukraine.

Anton Musanov and his wife Asia Morozova are originally from Russia but now live in Waterloo. They created a chat aimed at connecting Russians in Canada to help Ukraine.

“We have this sense of action. There’s something we can do right now and let’s do it,” Musanov said.

He said the chat has over 1,200 people now, including people from Kazakhstan, Belarus, and Ukraine.

Inna Pugacheva is from outside of Moscow, but now lives in Canada. When war broke out, she felt the need to help.

“I reached out to all people I know who have a connection with Ukraine, trying to see if there’s any way I can help them,” she said.

She has been delivering supplies to help Ukraine.

Meanwhile, Ganshankov says his connections back in Russia aren’t in favor of the war.

He said, despite what is reported on Russian news, his friends and family get information from the outside world.

“It’s the 21st century,” he said, adding, “They all have Instagram, they all have social media.”

“It’s a myth that it’s a majority. It’s certainly not,” he said.

He said that they are working to communicate with people back in Russia to make sure they know what is happening in Ukraine.