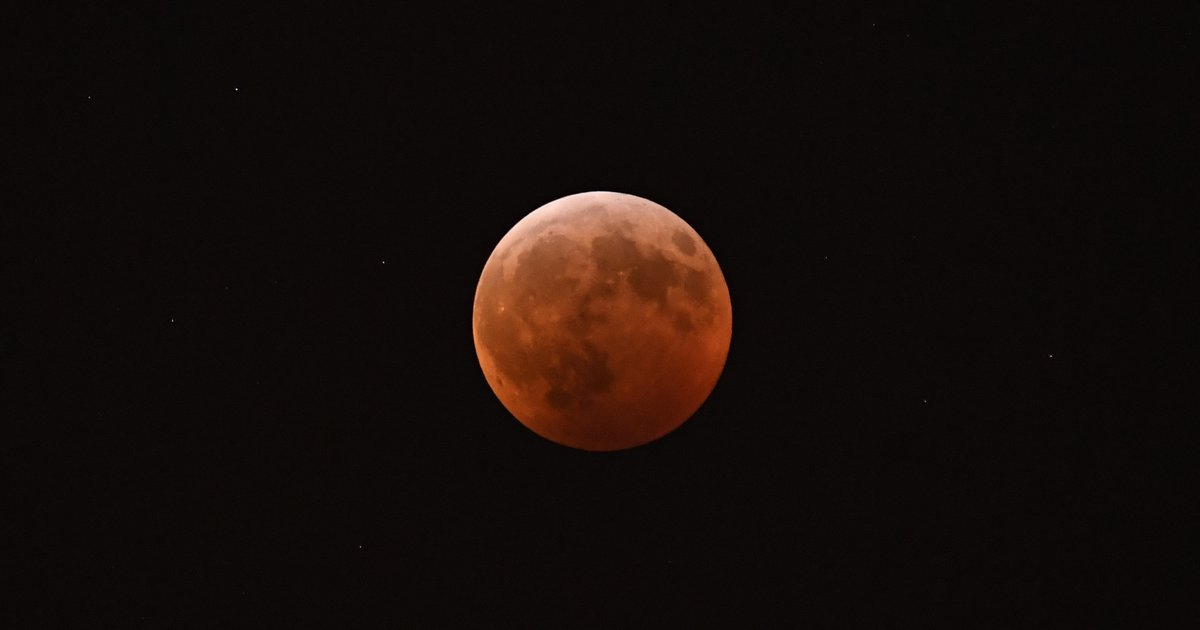 The first total lunar eclipse of the year is coming this weekend, but stargazers looking to catch a glimpse of the astronomical event should stay up late Sunday night into the wee hours of Monday morning.

May’s full moon, called the Flower Moon, will coincide with a total lunar eclipse and turn into a Blood Moon for up to 90 minutes on Sunday night. Although the Blood Moon has no real astronomical significance, it is named for the striking view it creates.

During a total lunar eclipse, the usually white moon shifts to a reddish-brown hue, indicating that the sun and moon are on opposite sides of the Earth, according to NASA. The earth covers the moon and blocks it from sunlight. During totality, the moon will have a reddish glow, but during the night it was also orange, yellow, or brown.

“When this happens, the only light reaching the lunar surface will come from the edges of Earth’s atmosphere,” NASA said. “The air molecules from Earth’s atmosphere scatter most of the blue light. The remaining light reflects off the moon’s surface with a red glow, making the moon appear red in the night sky.”

Full moons were named by Native American tribes for the seasons they inhabit, so it’s no surprise that May’s full moon is known as the flower moon. The name itself is attributed to the Algonquins, who knew that May was the best time of year to see flowers come to life. Others have called this month’s moon the Corn Planting Moon or Milk Moon, according to the Eastern Trail Alliance†

While most of North America, as well as South America, West Africa and parts of Europe will be able to see the full eclipse, parts of the Pacific Northwest and and Canada will only see a partial eclipse.

The moon will enter its “penumbral” phase around 9:30 a.m. on Sunday, May 15, casting a light shadow over the moon before creating a partial lunar eclipse at 10:30 p.m. as the full moon continues to rise to its highest point. The total eclipse will begin at 11:28 PM, according to the Farmers’ Almanac, and the eclipse will reach its maximum peak on Monday, May 16 at 12:11 PM. However, this is the best time to see the red-orange moon as it will be visible for much of the night.

The Holcomb Observatory in Indiana has tweeted a time-lapse video of what the total lunar eclipse will look like for most of the United States.

Less than 1 week until TOTAL Lunar Eclipse! The eclipse will be visible across most of N&S America. Nearly all of the continental US will see the TOTAL portion, with the eastern half of the US being able to see ALL parts of the eclipse. pic.twitter.com/9ooWeI6N0K

Unlike a total eclipse, which requires special glasses to stay safe while viewing, the lunar eclipse is perfectly safe to watch. All you need are your eyes and maybe binoculars, Space.com reported. The moon will move south from Earth’s shadow, so the top portion of the blood moon should appear brightest, although it’s difficult for experts to know exactly what it looks like to stargazers. Although the previous total lunar eclipse occurred last year, it was not fully visible to the Mid-Atlantic states at the time. The last time an eclipse was visible for the entire country was the Super Blood Moon Wolf eclipse, which occurred on Jan. 20, 2019. Sunday night could look a little rainy, according to the National Weather Service, which forecasts showers and cloudy skies, mainly before 9 p.m. However, the moon should be high enough in the sky to be visible to most viewers.

Those who can’t go outside to see the eclipse can watch a live stream from NASA, with experts talking about eclipses and the view from other parts of the world.