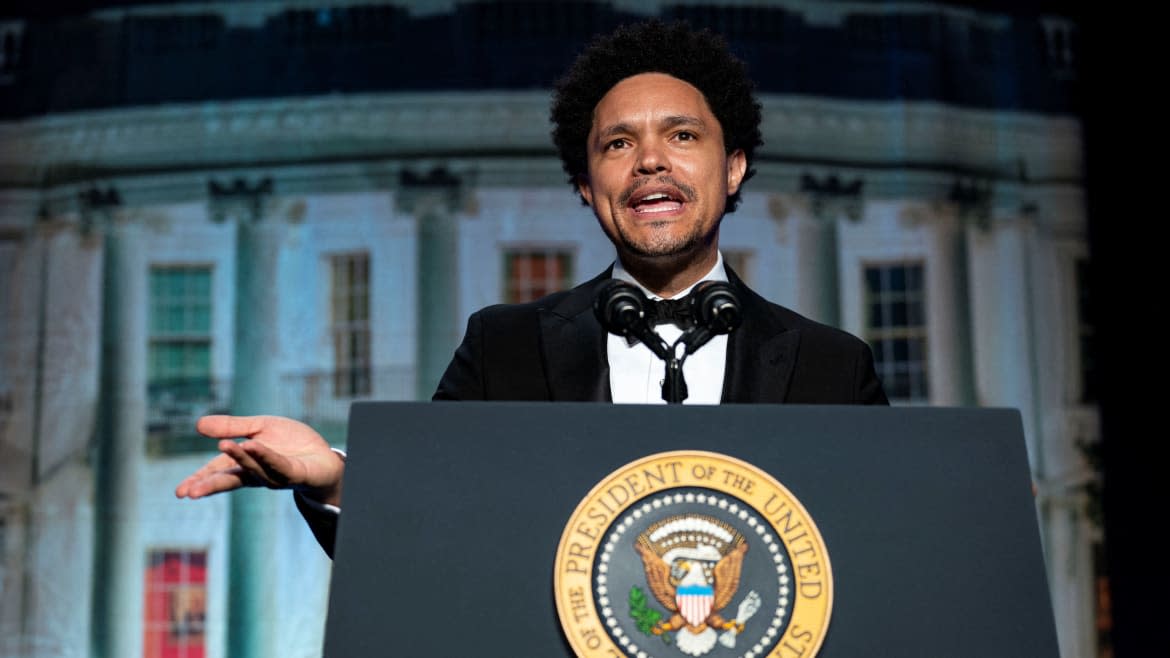 The last time a president and a comedian shared the stage at the White House Correspondents’ Dinner was six years ago tonight, when Larry Wilmore closed his set with a very personal goodbye to Barack Obama. A lot has changed in both politics and comedy since then.

Now, after a few years in which Donald Trump refused to attend and was roasted in absentia by, most notably, comedian Michelle Wolf, two more years canceled due to the pandemic—and one in between that everyone involved would rather forget—Washington DC’s “nerd prom” made a tentative return Saturday night amid yet another COVID wave that has already overtaken Vice President Kamala Harris.

But there was nothing hesitant about host Trevor Noah’s set.

With Pete Davidson and Kim Kardashian among the famous faces in the room, the daily show host opened his comments by saying it was his “great honor to speak at the nation’s preeminent superspreader event.”

“I expect this from Sean Hannity, but the rest of you, what are you doing?” asked Noah. “You’ve been telling everyone for the past two years how important it is to wear masks and avoid large gatherings indoors. The second time someone offers you a free dinner, you turn into Joe Rogan.” He then noted that we should have known something was wrong when Dr. Fauci “thought it was too dangerous” to attend the event, while “Pete Davidson thinks it’s OK.”

No one was unscathed during Noah’s unlimited set, from Democrats like Kyrsten Sinema (“openly bisexual but secretive Republican”) and Republicans like Ron DeSantis (“He won’t even tell people if he got the booster. Or when they say in Florida, ” Don’t ask, don’t tell'”).

Many jokes were also made at the expense of beleaguered media figures like Chris Cuomo and Jeffrey Toobin, who he said could still win the Grammy Award for Best Comedy Album after “throwing it out” in front of his peers.

“This is an exclusive event,” he added. “In fact, when I walked in, I heard Meghan McCain say to the bouncer, ‘Do you know who my dad was?!’ They were like, you have a ticket, you can come in, but she insisted on telling them who her father was.”

Until Meet the press host Chuck Todd, Noah asked, “How are you? I’d ask for a follow-up, but I know you don’t know what those are.” When the crowd moaned, he added, “Don’t bring him out, he’s trying!”

The host then compared Fox News to a Waffle House, explaining, “It’s relatively normal in the afternoon, but once the sun goes down, a drunken lady named Jeanine threatens to fight every Mexican who comes in.” He said the network’s primetime lineup is so “impactful” that their “segments on vaccines took their viewers…to the ICU”.

Seeing Fox’s Laura Ingraham in the crowd, Noah said, “Wow, what can you say about her that hasn’t already been said by the Anti-Defamation League?”

When it was his turn to tell his own jokes, Biden began to make fun of his own dismal approval ratings, saying it’s no surprise that it’s been six years since a president spoke at dinner since the country suffered a “sunset.” terrible plague – followed by two years of COVID.” He got some moaning when he added, “Imagine if my predecessor had come to this dinner this year, that now would have been a real coup.”

“I know there are questions about whether we should gather here tonight because of COVID,” Biden added later. “Well, we’re here to show the country that we’re getting through this pandemic. In addition, everyone had to prove that they were fully vaccinated and boosted. So if you’re watching this at home and wondering how to do it, get in touch with your favorite Fox News reporter. They are all here, vaccinated and boosted, all of them.”

For the record, the camera cut to Fox’s Peter Doocy, who barely elicited a smile.

At the conclusion of his speech, which lasted more than 25 minutes, Trevor Noah used his time in the spotlight to challenge the journalists in the room to use their uniquely American freedom for good.

“In America, you have a right to seek the truth and speak the truth, even if it makes those in power uncomfortable,” Noah said. “Even if it makes viewers or readers uncomfortable. Do you understand how great that is? I was standing here tonight and I was making fun of the President of the United States and I’m going to be fine.”

He turned to Biden and asked, “I’ll be fine, right?”

But before he left, Noah did another dig with the president. “Please be careful when leaving tonight,” he told the crowd. “We all know that this government is not handling evacuations well.”

For more information, listen and subscribe to the podcast The Last Laugh.

Read more at The Daily Beast.

Get the Daily Beast’s biggest scoops and scandals straight to your inbox. Sign up now.