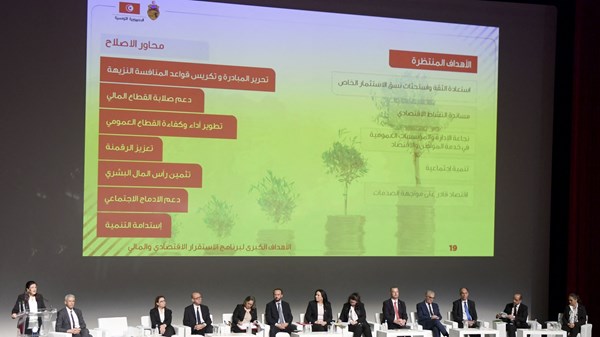 The Tunisian government plans to review subsidies for basic materials, ministers said on Tuesday.
Finance Minister Siham Al-Boughdiri told reporters that in the context of the current economic situation, the cost of state-backed materials is witnessing an “exorbitant” increase, from 4.2 billion dinars (about 1.3 billion euros) in 2022, compared to 3.2 billion dinars in 2021 (about one billion euros).
The minister explained that these “very high” costs are comparable to the costs of the health and employment budget.

The minister estimates that it will exceed 5 billion dinars (1.5 billion euros) by 2023, due to the rise in the prices of some basic materials such as wheat.
Therefore, there is a need for a gradual review of “subsidizing basic materials, but without the desire to increase them,” said the minister, who, along with a number of other ministers, presented the government’s economic reform program.
In turn, the Minister of Industry and Ports, Naila Nouira, confirmed that the “automatic adjustment” of the prices of fuels, electricity and gas will continue.
Economy Minister Samir Said explained that the government’s economic reform program is primarily aimed at “creating conditions for economic growth”.

He stressed that the reform of subsidies “must take into account the purchasing power of needy families”.
The government’s decisions come within the framework of a national economic reform program encompassing several sectors and the preparation of a “necessary” development plan for the period 2023-2025 that aims to achieve economic and financial stability in the country.