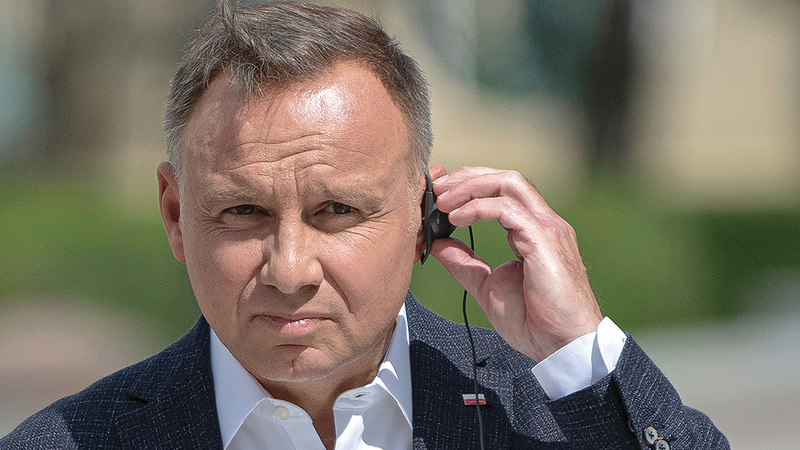 Polish President, Andrzej Duda, was subjected to a harsh experience and a ridiculous joke when he received a phone call he believed to be from French President, Emmanuel Macron, and that call came after the rocket attack Poland was subjected to last Tuesday . and he spent over seven minutes on that conversation which was actually conducted by notorious Russian scammers, Vovan and Lexus, who have scammed many world leaders (including Duda earlier in 2020).

A recording of the conversation was posted online the day before yesterday. Subsequently, Duda’s office issued a statement saying that a false caller had been able to reach the president through a phone call, but without confirming or denying the authenticity of the online material. In the recording, Duda can be heard thanking Emmanuel for the call and telling him that there was “no doubt” that a missile caused an explosion on Polish soil earlier that day.

But he added that while the missile was “Russian-made” and was “launched somewhere in the east…we don’t know who fired it.” Later in the conversation, Duda noted that both Ukraine and Russia use Russian-made missiles. Duda also said he had already spoken with NATO Secretary General Jens Stoltenberg and informed him of the possibility that Poland would invoke Article 4 of the “NATO” treaty in response to the incident, and with US President Joe Biden. Duda’s office had previously confirmed that the conversation with Stoltenberg took place at about 10 p.m. on the day of the missile strike and at 1 p.m. with Biden shortly afterwards.

On the call, the fake Macron asked if Biden would blame Russia for the accident, and Duda replied, “No.” The fake Macron also asked if the accident could have been caused by a Ukrainian missile, to which Duda replied, “I don’t know.” However, Duda claimed that Ukrainian President “Volodymyr Zelensky blames the Russians, he said they are absolutely sure it was a Russian missile launched by the Russians, and there is no possibility that it was a missile launched by the Ukrainians had been fired.” “Emmanuel, believe me, I’m more careful, I’m not blaming the Russians,” Duda added. “Emmanuel, this is a war and I think both sides will accuse each other.”

Those comments confirm public statements at the time from Poland, NATO and the United States, which said the source of the missile was unknown and that Zelensky blamed Russia.

Duda’s office confirmed in a statement released after the recording was posted to the internet that it had received a call following the missile strike from “a person claiming to be French President Emmanuel Macron”. And the statement continues that “During the conversation, due to the unusual way in which the interlocutor conducted the conversation, President Duda realized that there might have been an attempted fraud, and ended the conversation.”

The audio recording posted online shows that just over seven minutes into the conversation, after the fake Macron said he was “fed up with both Biden and Zelensky, especially Volodymyr,” Duda suddenly said, “Thank you, a good day.” upwards.

This appears to be the second incident in which Duda has fallen victim to these scammers, who often target figures critical of Russia.