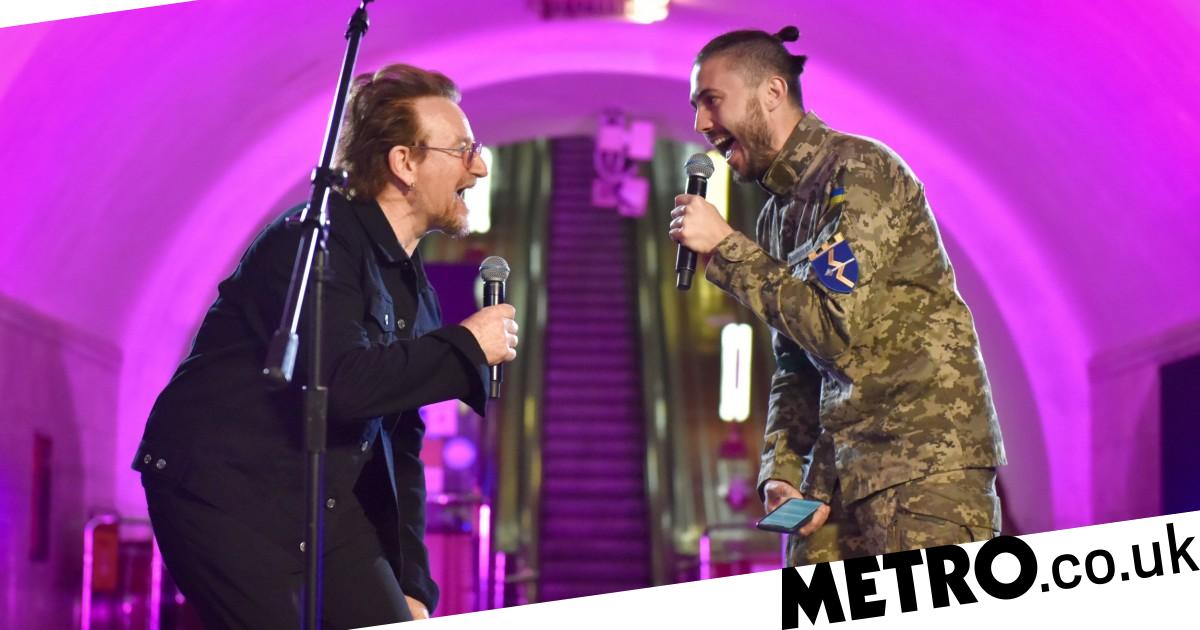 U2’s Bono has gone to a Kiev metro station to put on a literal “show of solidarity” for Ukraine during the war against Russia.

The Irish musician, personally invited by President Volodymyr Zelensky, performed at Khreshatyk metro station in support of the country during the conflict.

Illuminated in purple lights, the 61-year-old held a surprise concert at the station, which is used as a makeshift air-raid shelter, and praised Ukraine’s fight for “freedom.”

“The people of Ukraine are not just fighting for your own freedom, you are fighting for all of us who love freedom,” he said.

He played U2 classics such as Sunday Bloody Sunday, Desire and With Or Without You, performing in front of a crowd of soldiers in military gear.

Videos shared on social media show Bono and The Edge playing an acoustic version of their hit song With Or Without You, with the audience singing along as the pair perform.

A tweet from U2’s official account on Sunday announced the concert and also confirmed that the Ukrainian president had invited them to support the war-torn country.

It said: ‘President’ [Zelensky] invited us to perform in Kiev as a show of solidarity with the Ukrainian people and that’s why we came here.’

The band said goodbye to Bono and The Edge and added the hashtag: “#StandWithUkraine.”

Ukrainian musicians currently serving in the military also joined the star, including Taras Topolya of the Ukrainian band Antytila.

Speaking to Sky News in Kiev, Bono appeared to refer to Vladimir Putin by saying that the war in Ukraine belonged to “one man.”

“I think the people of Russia…younger people know what’s going on.”

He added: ‘I trust the younger people in Russia will throw this guy out of his office, it’s so high and so low, right now.’

The war in Ukraine has been going on since February, when Russian President Putin ordered a large-scale invasion of the country.

Millions of Ukrainians have been displaced by the conflict, with no clear end in sight.

If you have a celebrity story, video or photos please get in touch with the Metro.co.uk entertainment team by emailing us at [email protected], 020 3615 2145 or by calling our page Stuff Stuff to go. like to hear from you.