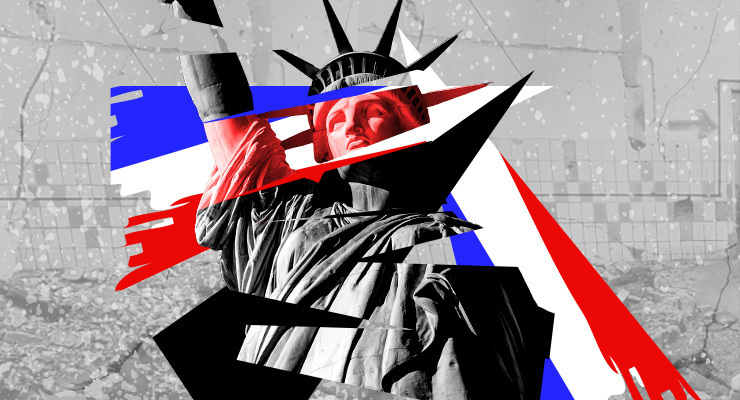 While many on the left continue to explain Russia’s invasion of Ukraine in terms of reflexive anti-Americanism and the victimization of Russia, there’s another, perhaps more damaging, anti-Western narrative being pushed both by right-wing commentators and mainstream commentators looking for a point of difference to distinguish themselves. Let’s call it the “flabby Western liberals” narrative.

“While Western countries have been convulsing themselves in debates about transgender pronouns and salami-slicing their societies into South African-style racial groups, autocratic governments have increasingly judged that the West is a paper tiger.”

The West was too busy “cancelling JK Rowling in response to the cries of a few fanatics” to defend itself, says Downer.

In the GuardianUK journalist Jonathan Freedland — in a rare case of The Guardian complaining the West has not been interventionist enough — blamed the West for giving Putin the “green light” to invade through its failure to respond forcefully enough to previous outrages.

From the ABC’s Stan Grant — still all at sea in the history of Western liberalism — we heard that the West doesn’t understand how Putin is all about identity while we in the West have been obsessed with “pluralism and multiculturalism” and “diversity” , riven by “a demographic, economic and cultural fault line that runs through the liberal pluralist West … across religious freedom, LGTB rights, race, gender and class”. Grant followed up by lamenting the US and the West were in decline and “mired in culture wars”.

Bizarrely, Nine newspapers today saw fit to publish a piece of appeasement propaganda from a right-wing commentator that somehow linked the invasion to low birth rates in the “post-everything West, where children are too often seen as a present cost, not a blessing for the future”.

Then of course there’s Donald Trump, cheering on his friend Putin and declaring him “smart”, and Rupert Murdoch’s most senior Fox News propagandist, Tucker Carlson (despite an attempt to change tack at the end of last week). persisting with his long-term support for Putin.

What all of these “analyses” by quite different observers have in common is to shift the blame for Russia’s actions onto the West, because of an innate failing of our own. We’re too obsessed with LGBTIQA+ and “diversity” issues, too busy canceling JK Rowling, too busy growing wealthier off globalisation, too busy supporting our indulgent Western lifestyle to stand up to thuggery.

As well as damning the West, these narratives elevate Putin, who is routinely portrayed as a strategic genius, playing three-dimensional chess while the West scrambles to understand him; a man in tune with the atavistic impulses of his people; a man with no time for such petty Western obsessions as LGBTIQA+ rights; a strong man who knows what he wants and takes it, letting no one get in his way.

For many on the right, Putin is a hero defending conservative values ​​like Christianity, country and family against Western liberalism. Some on the right, like Liberal MP Dave Sharma, have even said we should ally with Putin to challenge China.

Except, Putin’s Russia is not some homeland of autocratic achievement, but a complete basket case. You think Western countries have a problem with children? Russia’s population is falling. Life expectancy there is at developing country levels, partly because of excessive alcohol consumption. Its infant mortality rate is far above Baltic and European levels. Despite its falling population, in real and adjusted terms, Russia’s GDP per capita is not merely a fraction of Western levels, but is well below its Baltic neighbors and many eastern European countries, even given its extraordinary energy resources. Russia is 136th on Transparency International’s corruption perceptions index, just ahead of Myanmar. Putin has to murder and jail critics, political rivals and journalists to preserve his power.

Poor, old, shrinking and rotten, this is the country that many on the right venerate as a testimony to the benefits of crushing liberalism.

Rather than softening and weakening the West, liberalism, pluralism, multiculturalism, diversity and respect for basic human rights are a key reason why Western countries are wealthier, fairer, more stable and better places to live. There’s a reason millions of the world’s poorest people, and those displaced by conflict, drought and persecution seek refuge in Western countries, rather than wanting to live in autocracies like Russia or China.

We have our own often profound problems with corruption, inequality, discrimination and oppression. The US, in particular, is badly torn by polarization and political extremism. We equally invade countries unprovoked. There are plenty of items on the encyclopedic list of Western sins. But none of those who hold Putin’s Russia up as a better way seem to be clamoring to live there.