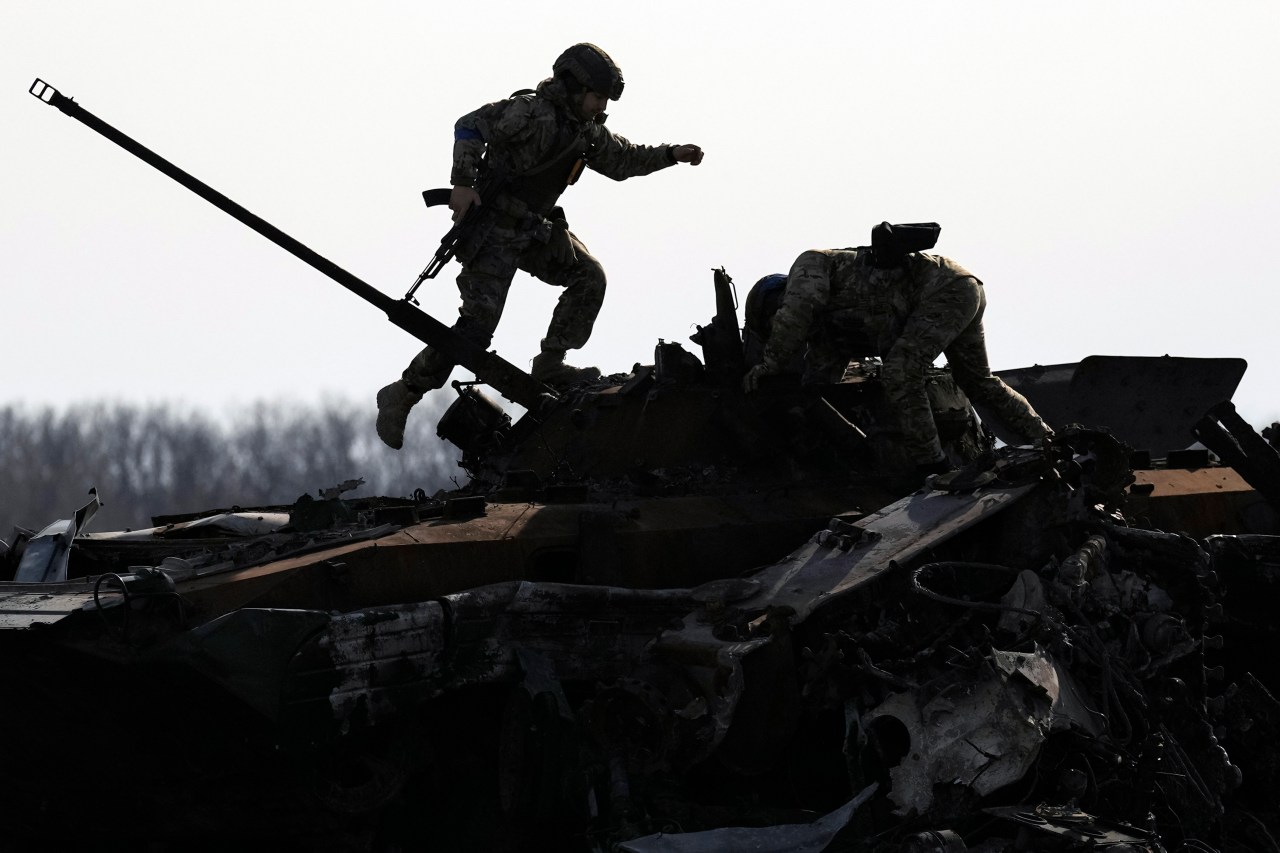 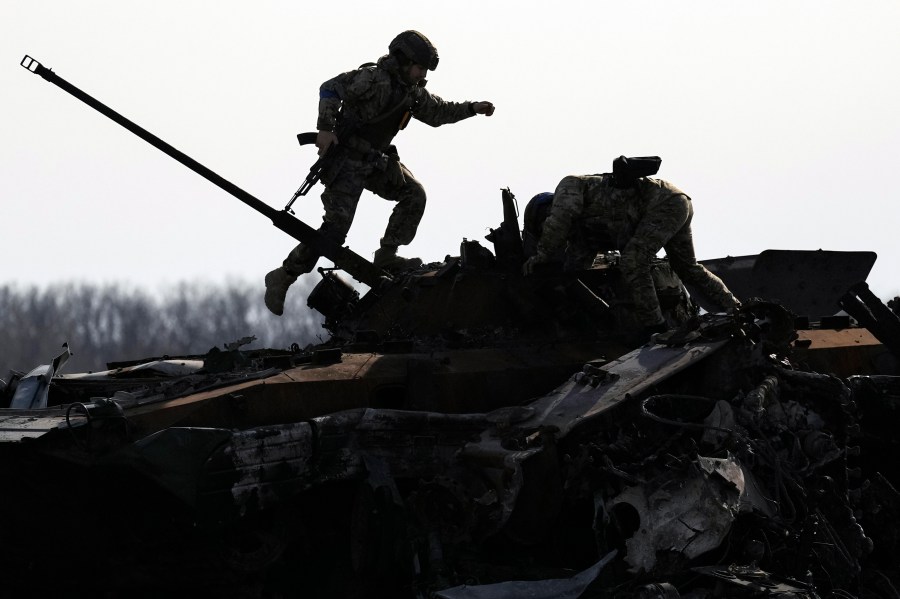 CHERNIHIV, Ukraine (AP) — Ukrainian leaders predicted there would be more gruesome discoveries in the days ahead after retreating Russian forces left behind crushed buildings, streets strewn with destroyed cars and mounting civilian casualties that drew condemnation from across the globe.

Kremlin forces devastated the northern city of Chernihiv as part of their attempt to sweep south toward the capital before retreating. In the aftermath, dozens of people lined up to receive bread, diapers and medicine from vans parked outside a shattered school now serving as an aid-distribution point.

Ukrainian Foreign Minister Dmytro Kuleba warned Thursday that despite a recent Russian pullback, the country remains vulnerable, and he pleaded for weapons from NATO and other sympathetic countries to help face down an expected offensive in the east. Nations from the alliance agreed to increase their supply of arms, spurred on by reports that Russian forces committed atrocities in areas surrounding the capital.

The mayor of Bucha, near Kyiv, said investigators have found at least three sites of mass shootings of civilians during the Russian occupation. Most victims died from gunshots, not from shelling, he said, and some corpses with their hands tied were “dumped like firewood” into recently discovered mass graves, including one at a children’s camp.

Mayor Anatoliy Fedoruk said the count of dead civilians stood at 320 as of Wednesday, but he expected the number to rise as more bodies are found in his city, which once had a population of 50,000. Only 3,700 now remain, he said.

In his nightly address, Ukrainian President Volodymyr Zelenskyy suggested that the horrors of Bucha could be only the beginning. In the northern city of Borodianka, just 30 kilometers northwest of Bucha, Zelenskyy warned of even more casualties, saying “there it is much more horrible.”

Ukrainian officials said earlier this week that the bodies of 410 civilians were found in towns around the capital city. Volunteers have spent days collecting the corpses, and more were picked up Thursday in Bucha.

In the seaport city of Mariupol, Ukranian authorities expected to find much the same. “The same cruelty. The same terrible crimes,” Zelenskyy said.

Ukrainian and several Western leaders have blamed the massacres on Moscow’s troops, and the weekly Der Spiegel reported that Germany’s foreign intelligence agency had intercepted radio messages between Russian soldiers discussing the killings of civilians. Russia has falsely claimed that the scenes in Bucha were staged.

In the 6-week-old war, Russian forces failed to take Ukraine’s capital quickly, denying what Western countries said was Russian leader Vladimir Putin’s initial aim of ousting the Ukrainian government. In the wake of that setback and heavy losses, Russia shifted its focus to the Donbas, a mostly Russian-speaking, industrial region in eastern Ukraine where Moscow-backed rebels have been fighting Ukrainian forces for eight years.

On Thursday, a day after Russian forces began shelling their village in the southern Mykolaiv region, Sergei Dubovienko, 52, drove north in his small blue Lada with his wife and mother-in-law to Bashtanka, where they found temporary shelter in a church .

“They started destroying the houses and everything” in Pavlo-Marianovka, he said. “Then the tanks appeared from the forest. We thought that in the morning there would be shelling again, so I decided to leave.”

Hundreds of people have been fleeing villages in the Mykolaiv and Kherson regions that are either under attack or occupied by Russian forces.

Tatiana Vizavik, 50, fled Chernobaievka in the Kherson region with her son, daughter-in-law and six grandchildren.

When the Russian attack began, they moved to the basement of an apartment building and spent five nights there. “We had nothing to eat. We had no drinking water,” Vizavik said. “We were frightened to go out. Then some volunteers starting helping us.”

She said they don’t know whether their house survived the shelling because they were too frightened to check before leaving town. They hope to reach safety in the Czech Republic.

Marina Morozova and her husband fled from Kherson, the first major city to fall to the Russians.

“They are waiting for a big battle. We saw shells that did not explode. It was horrifying,” she said.

Morozova, 69, said the only news people get is from Russian television and radio. She said the Russians handed out humanitarian aid so they could film the distribution.

Anxious to keep moving away from areas that Russian troops have reached, the couple and others boarded a van that would take them west. Some will try to leave the country, while others will remain in quieter parts of Ukraine.

The United Nations estimates the war has displaced at least 6.5 million people within the country.

The UN refugee agency, UNHCR, said that more than 4 million have left Ukraine since Russia launched its invasion on Feb. 24 and sparked Europe’s largest refugee crisis since World War II. Half of the refugees are children, according to UNHCR and the UN children’s agency, UNICEF.

The International Organization for Migration, which tracks not just refugees but all people on the move from their homes, estimated that more than 12 million people are stranded in areas of Ukraine under attack.

The United Nations’ humanitarian chief told The Associated Press on Thursday that he’s “not optimistic” about securing a cease-fireafter meeting with officials in Kyiv and in Moscow this week, underlining the lack of trust the two sides have for one another. He spoke hours after Russian Foreign Minister Sergey Lavrov accused Ukraine of backtracking on proposals it had made about Crimea and Ukraine’s military status.

It’s not clear how long it will take withdrawing Russian forces to redeploy, and Ukrainian officials have urged people in the country’s east to leave before the fighting intensifies there.

In addition to spurring NATO countries to send more arms, the revelations about possible war crimes led Western nations to step up sanctions, and the Group of Seven major world powers warned that they will continue strengthening the measures until Russian troops leave Ukraine.

The US Congress Thursday voted to suspend normal trade relations with Russia and ban the importation of its oil, while the European Union approved punishing new steps, including an embargo on coal imports. The UN General Assembly, meanwhile, voted to suspend Russia from the world organization’s leading human rights body.

US President Joe Biden said the UN vote demonstrated how “Putin’s war has made Russia an international pariah.” He called the images coming from Bucha “horrifying.”

“The signs of people being raped, tortured, executed — in some cases having their bodies desecrated — are an outrage to our common humanity,” Biden said.

Schreck reported from Kyiv, Ukraine. Associated Press journalists around the world contributed to this report.