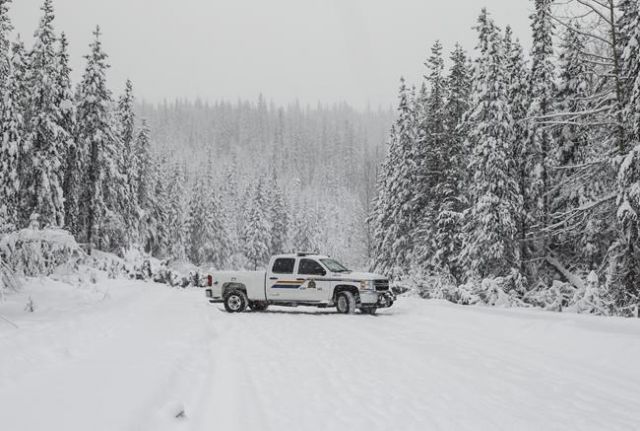 Police patrol a road leading to a Coastal GasLink construction site near Houston BC on Thursday, January 9, 2020. A United Nations human rights commission dealing with the fight against racism has reiterated Canada to halt construction of two pipelines until approval from affected indigenous communities in British Columbia.THE CANADIAN PRESS/Jason Franson

A United Nations human rights commission dealing with the fight against racism has reiterated its call on Canada to halt construction on two pipelines until it receives permission from affected indigenous communities in British Columbia.

The UN Committee on the Elimination of Racial Discrimination says it has received information about police surveillance from the people of Wet’suwet’en and Secwepemc who are opposing the construction of the Coastal GasLink pipeline in northern BC and the expansion of the Trans Mountain pipeline from Alberta to the BC coast.

A letter from committee chair Verene Shepherd says the information alleges that surveillance and use of force has escalated against those who oppose the pipelines to intimidate them and drive them off their traditional lands.

The April 29 letter addressed to Leslie Norton, Canada’s representative to the UN in Geneva, points to a 2019 commission decision calling on Canada to “end immediately the forced evictions” of the Wet’suwet’en and Secwepemc protesters by the police and stop construction on the two pipes.

The BC and federal governments have yet to respond to requests for comment on the concerns outlined by the UN commission.

The RCMP says it has stepped up patrols around industry and “other camps” near Coastal GasLink pipeline construction sites after what the Mounties called a “violent clash” in February targeting workers.

RCMP had responded to reports of damaged equipment and an attack on guards. Before getting there, they said officers on the road were stopped by a fire as a group of people reportedly threw flaming sticks at them.

A statement Wednesday from Cpl. Madonna Saunderson of the RCMP’s Northern District says the Mounties are concerned about the safety of people in the area and that officers “patrol public lands to make sure no one sets up structures to obstruct access”.

Police do not enter buildings or tents during their patrols, she added.

Staff Sgt. Janelle Shoihet says there has been no RCMP enforcement related to opposition to the Trans Mountain extension in BC’s southern interior since last September, when RCMP said workers were blocked from a location northeast of Kamloops and four people were arrested while one fled.

The BC prosecution has cleared the charges, which include assault and mischief against the five people, the Mounties said in March.

“Patrols continue throughout the (Clearwater RCMP) police jurisdiction, but are by no means isolated to any particular (Trans Mountain Expansion Project) site or camp,” Shoihet said in a statement.

Indigenous leaders responded to the UN commission’s letter at an online press conference on Wednesday, saying their nations have never signed treaties and their territory has never been ceded to the Canadian government.

The councils of the First Nation band are responsible for the reserve, but have no authority to make decisions about the wider Wet’suwet’en area, said Sleydo,’ a spokesman for a Wet’suwet’en group behind the set up blockages. along a road used by Coastal GasLink pipeline workers.

Wet’suwet’en’s hereditary leaders have been against the natural gas pipeline for years, with 20 First Nation band councils signing the project.

Sleydo’ told the press conference that she is “daily harassed and guarded” by private security firms and the RCMP, especially members of the Mounties’ Community-Industry Response Group.

Kanahus Manual with the Tiny House Warriors, a group that opposes the Trans Mountain pipeline, told the news conference that the federal government created the system of First Nation reservations and that bandrades do not have the rights to 180,000 square kilometers of undisclosed ​​Secwepemc territory.

Trans Mountain, a federal Crown company, says its 1,150-mile pipeline expansion project traverses “numerous traditional areas” and 15 First Nation reservations in BC, and it only traverses reserve areas with permission.

The UN committee is made up of 18 independent human rights experts elected for four years by countries, including Canada, which have signed the convention to end racial discrimination and which they must monitor.

The December 2019 decision called on the Canadian government to halt construction of the pipeline projects until it obtains free, prior and informed consent as set forth in the UN Declaration on the Rights of Indigenous Peoples.

A follow-up letter in 2020 says the commission regretted Canada’s interpretation of the principle as “a duty to engage in meaningful and good faith dialogue with Indigenous peoples and to ensure a process, but not a particular outcome” , meaning the pipelines can continue after consultation.

The UN statement, which both the federal and BC governments have pledged to implement in recent years, states that governments should not make decisions regarding indigenous rights or territories without authorization.

The UN commission’s most recent letter states that Canada should report by November last year on any steps taken to address the concerns outlined in 2019, but it has not yet submitted its report. The commission has asked the federal government to respond to its previous communications by 15 July.