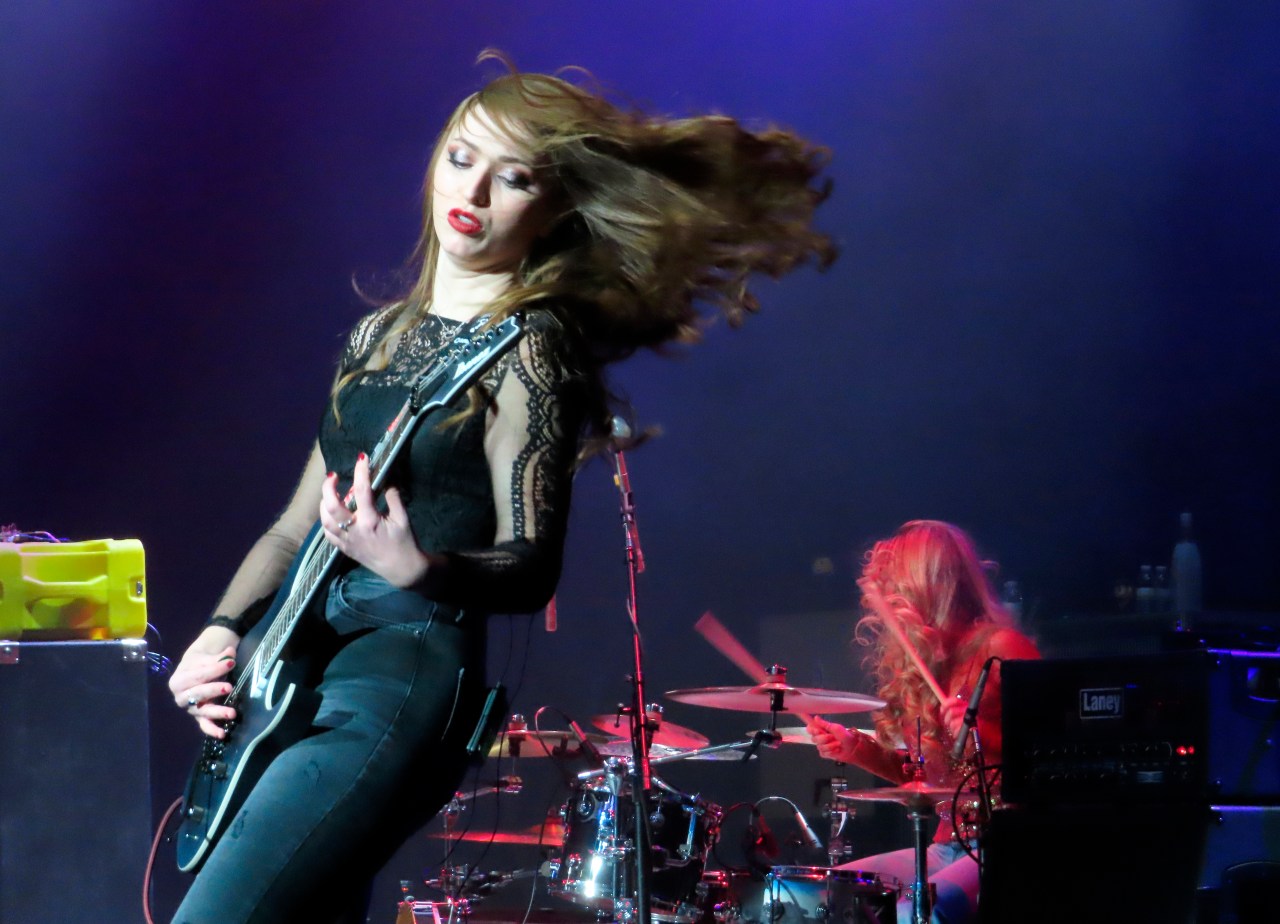 ATLANTIC CITY, NJ (AP) — It started slowly, as the opening band’s intro music played to a quiet audience at Atlantic City’s Tropicana casino. Plush ripped into their opening number, “Athena,” pounding away at power chords and sending vocals soaring into the rafters.

Upcoming concerts in the Capital Region

Just before the guitar solo, everything stopped while singer and rhythm guitarist Moriah Formica played a dramatic chord, and the first whoops emanated from the crowd. The crowd roared in recognition of their cover of Heart’s “Barracuda,” on which Formica uncannily channels Ann Wilson (something few singers on this planet can do), and cheered even louder at its completion.

Each successive song got more applause until the end of their 30-minute set left much of the crowd on its feet, giving a standing ovation to a band few of them had heard of when they bought tickets to see the headliner, Slash. It’s been like this for months now for Plush, the all-female, impossibly young metal quartet from upstate New York that is breathing new life into hard rock and putting to rest, once and for all, the misguided and misogynistic notion that girls can’ t rock as hard as guys.

Anyone who has ever heard Ann and Nancy Wilson of Heart, Joan Jett, Lita Ford, Deborah Harry of Blondie, Pat Benatar, Janis Joplin, Starship’s Grace Slick, Chrissie Hynde of the Pretenders, Melissa Etheridge, or Tina Turner knows just how ridiculous that view point. And yet it persists in some quarters.

“Rock ‘n’ roll is thought to be a hard, aggressive, just in-your-face kind of rawness,” said Formica. “Unfortunately, a lot of people think women aren’t aggressive. There are women who rock—and rock hard—but it’s still like, ‘It’s a girl, it’s laughable.’ That’s a big reason why women haven’t necessarily been as recognized as men in rock because they’re not ‘hard enough,’ which is so untrue. Women can be freakin’ vicious!”

Plush is vicious, melodic, sensitive, and bombastic, all at once. Their self-titled debut album last October was loved by critics, and they’ve been touring virtually non-stop with the likes of Halestorm and Evanescence—woman-led bands who are idols to all four members of Plush—along with gigs with Daughtry , Sevendust, Mammoth WVH, and most recently Slash.

Their influences also include female rock icons, but these young women cut their musical teeth on the likes of Led Zeppelin, Kiss, Aerosmith, Black Sabbath, Alice In Chains, and Skid Row. They’ve clearly done their homework on what came before. Lead guitarist Bella Perron (the Maine native is the only non-New Yorker in Plush) grew up thinking Kiss guitarist Ace Frehley “was just the coolest human being on the planet.” Asked for the best guitar riff in history, she immediately offered up Zeppelin’s “Whole Lotta Love.” Her favorite solo is Randy Rhoads’ mind-melting shred in Ozzy Osbourne’s “Over The Mountain.”

Foreigner, NYS Fair looking for chorus to perform on stage

They’ve also mastered the tiny details, from Perron’s finger-flick riff during the second verse of “Barracuda” to her high leg kick to punctuate a particular power chord—things Heart’s Nancy Wilson has done for decades. And the rock-star poses and hair-flings seem to come second nature to them, to the point where it seems like they’ve been doing this for 30 years. (Formica is 21 and the other three are just 19.)

“A year ago, I was in high school,” Colucci said. “I had no idea what it was like going out on the road, putting out music. It’s a lot of work. But it’s fun work.”

“Now is just a really exciting time for rock,” Perron said. “I got into Halestorm when I was 12, and Nita Strauss had just joined Alice Cooper. They were my first female guitar players to look up to. It’s really important to support women in rock and stick together and inspire young people to just go for their dreams, no matter if there’s something stacked against them.”

“It’s amazing to see this platform become more feminine,” added Suppa, the booming bassist who appears to be on a mission to single-handedly bring bell-bottoms back. “It’s mostly been a male-dominated thing. It’s been really nice to be part of this sisterhood with the women we’ve met.”

Their music deals with the dark side of relationships, but almost every song ends with the protagonist realizing she’s in a no-win situation, cutting her losses, and moving on.

“It’s easy for people to say, ‘Oh, I’m heartbroken, this is the end of the world,’” said Formica, who wrote the band’s first single, “Hate,” about a failed relationship. “And it is, for a second. But stuff has to go on. Pick yourself back up and just keep going, because if you don’t, nobody else is going to. I talk about really dark stuff, but in the end, it’s all about overcoming.”

And even though three-quarters of the band aren’t old enough yet to legally drink, they’re already thinking of their legacy, particularly when it comes to the next generation of young girls thinking of picking up guitars or drumsticks.

“The thought of being that inspiration for another young woman is just amazing,” Formica said. “We receive (direct messages) from people like, ‘My granddaughter loves you guys and wanted to play guitar but she didn’t think it was something she could do until she saw you.’”