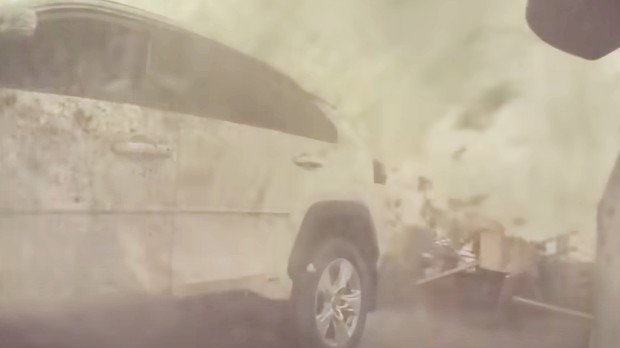 A new video has emerged showing the moment a tornado touched down in Uxbridge, Ontario. on the weekend, ripping off the roof of a local brewery.

The footage was captured by several cameras attached to a Tesla parked outside the Second Wedge Brewery on Victoria Street.

It shows the sky is quickly darkening as the EF2 tornado first touched down in the area on Saturday afternoon.

A camera at the rear of the vehicle initially shows high winds pounding a tent set up outside the brewery, tearing the awning apart and bending the metal frame.

Then within seconds, a stream of debris, including what appears to be wood and insulation from the roof of the brewery, begins to fly through a shot captured by a front camera.

The whole thing unfolds in about two minutes of footage and by the time it’s done you can see another parked vehicle with at least two broken windows and a pile of rubble in the foreground.

The Toronto resident, whose vehicle captured the footage, told CP24.com that he had just arrived at the brewery with his wife and seven-month-old son when it started to rain.

He said he did get the emergency warning for an approaching thunderstorm on his phone, but he was inside and wasn’t really worried at first.

Debris can be seen hitting a vehicle in Uxbridge as an EF2 tornado touched down this weekend. (Canuck Chris/YouTube)

However, the situation quickly changed.

“It started raining quite a bit and when the staff closed the doors to the bay window at the front of the building, I looked at my wife and said, ‘Wow, it’s coming down really hard.’ A second or two later, it had gotten to the point where it wasn’t an ‘oh wow,’ it was an ‘oh no,’ said Chris Kreasul.

“We were going to move to the back of the bar. We were two steps away from the table we were sitting at and then there was a very loud creaking noise. My wife turned to protect our seven month old son from the glass that would break from the windows and I bear hugged them, covered them and covered my head. I just waited when all the debris from the roof fell on me.”

Saturday’s storm caused extensive damage across Uxbridge, prompting the city to declare a state of emergency.

Environment Canada has previously said the tornado was embedded in the leading edge of a derecho, a widespread and long-lasting storm accompanied by a series of thunderstorms.

At one point, a maximum wind speed of 195 kilometers per hour was recorded.

“It was like a war zone,” Kreasul said of the scene outside the brewery after the storm passed. “Down trees were everywhere, debris of all kinds everywhere, the roof of the brewery was missing and across the parking lot on top of two vehicles. It just didn’t seem the same place it was when we got there.”

Kreasul said he didn’t even think about watching the video from his Tesla until a few days after the tornado, because he was quite shocked by what happened.

He said that while his car was “beaten up” with a cracked windshield and a damaged roof, he was able to drive to Toronto with his family after the storm.

More importantly, he said no one was injured.

“It’s a miracle that we got off so well. Looking at the video, I can’t believe no one was seriously injured,” he said.

The brewery co-founder told CTV News Toronto earlier this week that the business could be closed for more than a year due to the damage.

The brewery is one of at least 35 properties in Uxbridge to be severely damaged as a result of the storm.