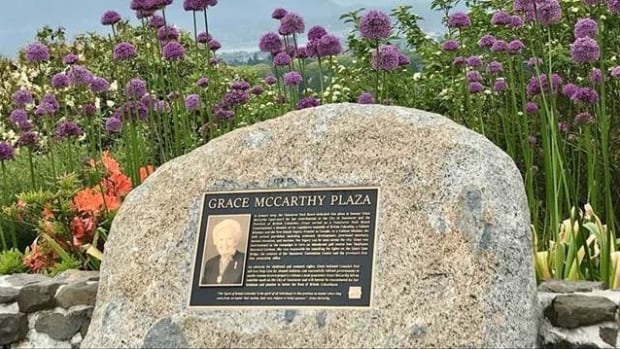 The Vancouver Board of Parks and Recreation commemorated its former Vice-Chairman Grace McCarthy with a new plaque and plaza.

The new Grace McCarthy Plaza is located at the top of Queen Elizabeth Park near the Bloedel Conservatory, a site the park authorities say worked tirelessly to ensure it was completed.

McCarthy served as vice chairman of the park board for three terms and was a lifelong ambassador for the city’s green spaces, the park board said in a press release.

Stuart Mackinnon, chairman of the park board, said the site chosen is suitable for a McCarthy memorial, as the view from the plaza overlooks her ride up Vancouver-Little Mountain.

Running for the Social Credit Party, McCarthy won the Vancouver-Little Mountain ride in 1966, and was soon appointed to the Cabinet, where she served for the remainder of former BC Premier WAC Bennett’s term.

“Her favorite things were things to do with horticulture, trees and flowers… so we thought that was very appropriate,” he said.

“She was a person who was really bigger than life. Everyone loved Grace McCarthy.”

McCarthy went on to serve as minister in the governments of all three premieres of Social Credit for three decades, and was dubbed “Amazing Grace” by her own party.

According to Mackinnon, she was instrumental in bringing Expo 86 to Vancouver, building the SkyTrain and installing the lights on the Lion’s Gate Bridge.

“Grace McCarthy made an indelible impression not only on the city of Vancouver, but also on the province,” he said.