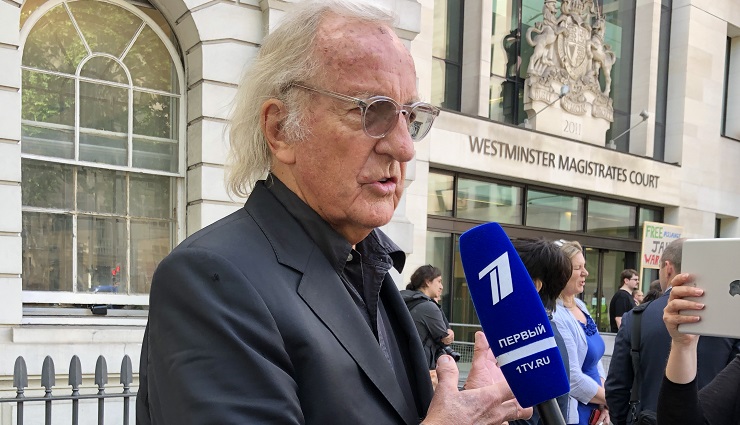 Spare a thought for John Pilger, the platonic ideal of the left-wing journalist. Pilger has been relatively quiet during Russia’s invasion of Ukraine, tweeting only a handful of times. Perhaps that’s because Pilger has not oncenot twicenot three timesnot four times but five times mocked the idea that Russia would invade Ukraine in recent months — as well as spelling out in an article two weeks ago that claims of an imminent invasion were pure hysteria.

Indeed, a month ago Pilger claimed “the war mongering of Biden and his UK echoes is exposed, like Blair’s, as a crime”, and followed that up just a fortnight ago with the sneer “the absence of a Russian ‘invasion’ a bitter disappointment to its most avid promoters in London” and compared the Biden administration’s rhetoric to the Bush administration’s lies about Iraqi weapons of mass destruction.

Pilger must be bitterly disappointed that the man he has valiantly defended, Russian President Vladimir Putin, has ended up invading another country and slaughtering civilians. “The invasion of a sovereign state is lawless and wrong,” Pilger generously allowed on the weekend, using uncharacteristically mild language. Quite a contrast with his usual rhetoric aimed at the West — filled as it is with “warmongers”, “lies and racism”, “pure propaganda”, “brainless smears”, “modern day fanaticism” and “holocaust”.

In Pilger’s world, Russia is purely a victim.

“NATO, with a proven record of rapacious war, now completely surrounds Russia in the west,” he claimed on Monday, presumably having adjusted his map of Europe to remove Finland and Sweden, and handed the whole of Ukraine to Putin.

If Putin’s attack on Ukraine is “lawless and wrong”, it has only been provoked by a campaign of Western humiliation of Russia and constant military threats from NATO. After all, Pilger insists, “almost every Russian knows that it was across the plains of Ukraine’s ‘borderland’ that Hitler’s divisions swept from the west in 1941, bolstered by Ukraine’s Nazi cultists and collaborators. The result was more than 20 million Russian dead.” Not to mention that the current Ukrainian government is a pack of Nazis installed by Barack Obama in 2014 (Ukrainian President Volodymyr Zelenskyy is famously Jewish, but no matter).

In a genuinely weird, pop culture reference-laden piece promoted by Pilger yesterday, even Russian interference in Western elections was dismissed as propaganda; Putin (who “constantly displays an exceptional emotional and intellectual discipline”) was only insisting “the civil rights and culture of Russians stranded in the Near Abroad be respected”.

For Pilger, the West is always to blame. It is eternally engaging in genocide, war crimes, class war, mass slaughter and cover-ups involving compliant media, all related by Pilger with that famous mix of lugubriousness and sanctimony. His most recent obsession has been the National Health Service in the UK, which he insists is under relentless attack from the right (alas, funding has increased in real terms for the NHS every year for over a decade, but anyway).

Atrocities, slaughter and suppression of human rights outside the West are either ignored or dismissed as propaganda, like China’s horrific persecution of Uyghurs (which is just a “propaganda campaign” by the US) or the civil war in Syria (Pilger has been an ardent defender of the monstrous Assad regime and its Russian protector to the point of conspiracy theory†

Well, so what? It’s been the best part of 40 years since Pilger was important in journalistic terms. Who cares what his hot take on an invasion he insisted wouldn’t happen is? But Pilger still retains significant influence on the left; an eminence grise (or is that grease?) of activist journalism seen as a hero of truth-telling by a generation of left-wingers. It’s also hard to avoid Pilger if you share any of his views — for those of us who have long supported Julian Assange, Pilger’s full-throated backing for the persecuted journalist currently rotting in Belmarsh prison has been an embarrassment, but you take help where you can get it.

More to the point, Pilger’s embrace of conspiracy theories and polarized perspectives reflects the horseshoe effect by which the far left and the far right gradually merge and end up reinforcing each other. Alienation loves company, as it were.

As the Republicans in the US currently demonstrate, the emergence of a radical, anti-democratic narrative combining cherrypicked anti-institutional and anti-elite elements from all extreme worldviews can become a potent threat to democracy, flawed as it might be in the West.

“The restoration of imperial mythology demands, above all, a permanent enemy,” Pilger concluded in his essay dismissing the threat of Russian invasion.

Certainly, Ukrainians understand what it is to be an enemy of Putin’s imperial mythology.