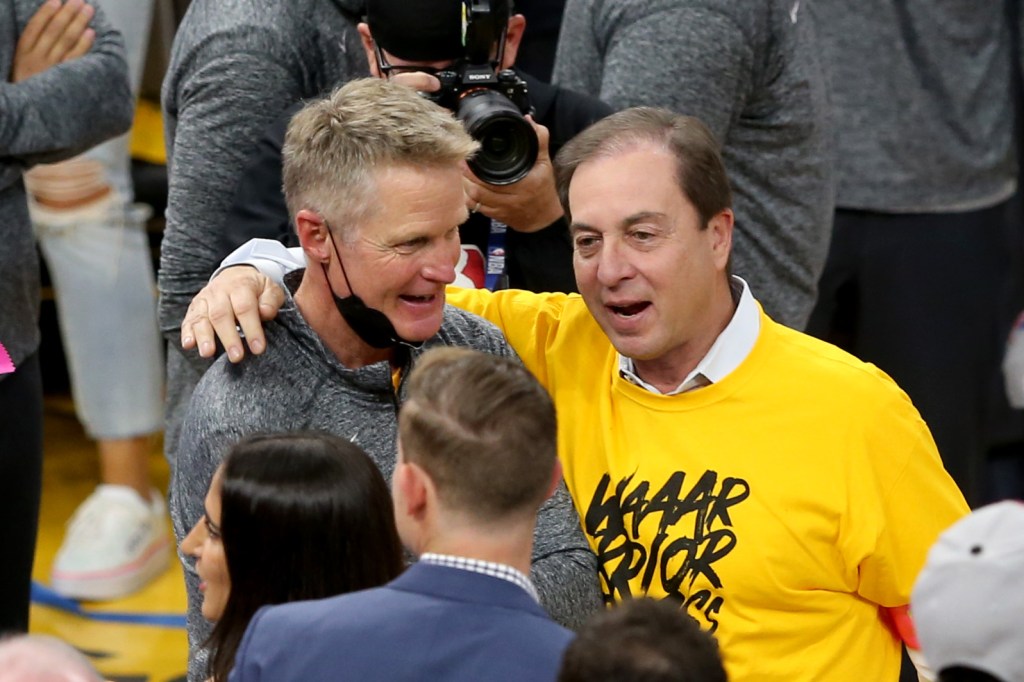 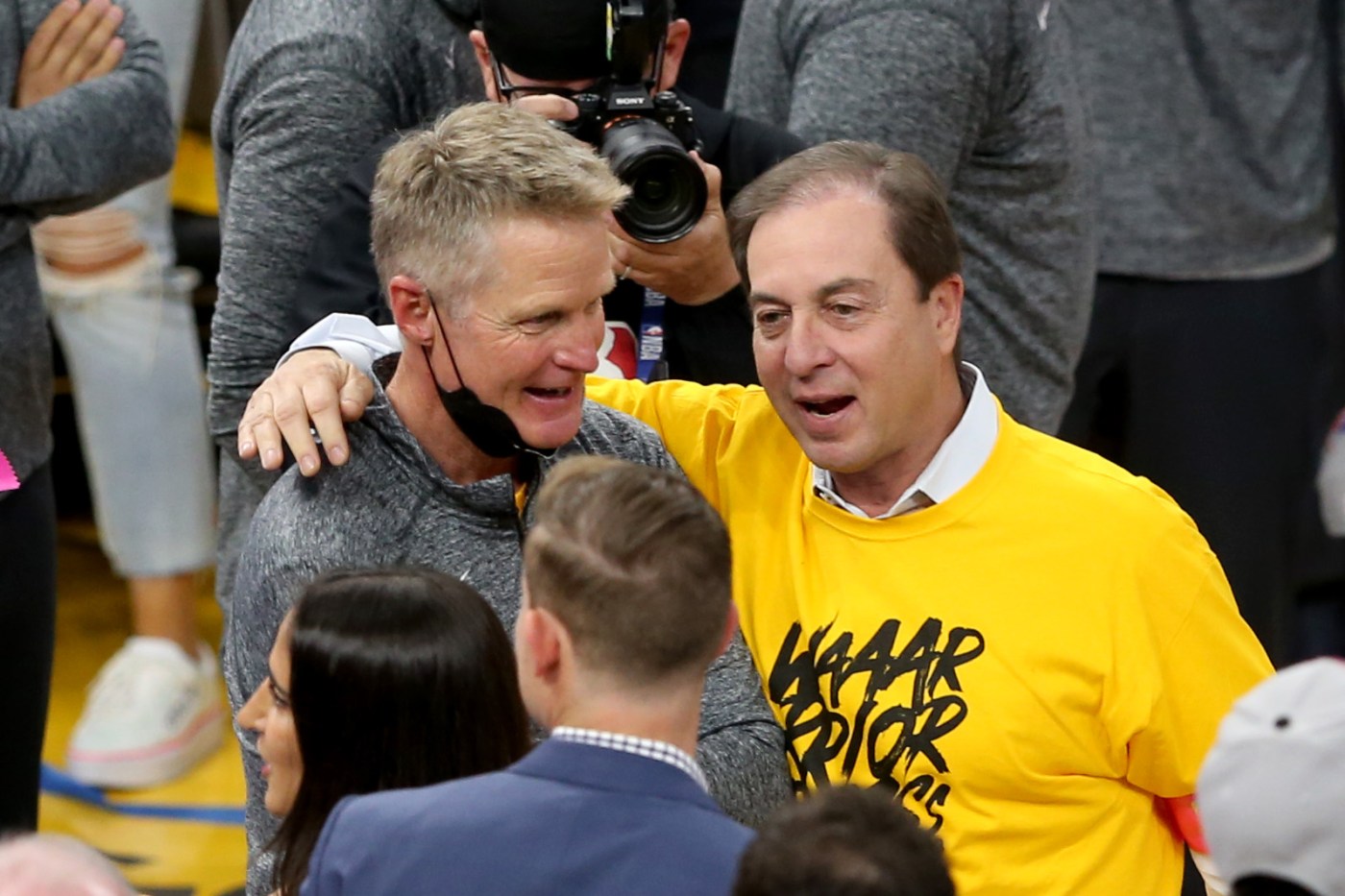 SAN FRANCISCO — After Game 5 of the NBA Finals, a Warriors win that put them one game away from a fourth title in eight years, Brian Windhorst went from ESPN to SportsCenter and decided to embarrass himself.

“They have a payroll of $340 million when you consider taxes,” Windhorst said of Golden State. “You don’t just have to beat the Warriors on the field, you have to beat their checkbook. Nothing like Andrew Wiggins tonight, but this was a checkbook win for the Warriors. †

Whatever happens in the next few days was not meant as a compliment.

No, it was meant to undermine the Warriors’ success this season.

And that’s fine. Inappropriate, but good. Heaven knows I can deliver a good pot shot too.

But what really bothers me about this view is that it carries water for the cheap NBA owners, who would rather complain about a rich team than actually invest in their team.

There are plenty of “rumblings” around the NBA that owners don’t like Golden State spending. The Warriors have the highest payroll in the league at $178.9 million as per USA Today, and with their luxury tax payments, they are indeed close to $340 million for this season.

But how is that anything but a good thing?

Not just for Bay and Warriors fans and Steph Curry’s great-great-great-grandchildren, but for the league in general?

It is not the case that the luxury tax will just disappear.

And wouldn’t it be ideal for a team to actually spend money on their own players in an effort to have the best team possible?

The Warriors have not broken any rules, nor are they pushing any boundaries – they play within the confines of the NBA rules and are severely punished for simply not being cheap.

They pay luxury tax – which increases the more you spend – because they want to win.

Apparently that’s not a universal wish in the NBA.

The Warriors are not the basketball equivalent of the Steinbrenner Yankees who go out and use the Oakland A’s as a farming team. It is also not a sports wash situation in Manchester City, Paris Saint-Germain.

No, the Warriors spend money on their own players with money they have brought in through investments in their basketball product.

Even putting a pejorative tone on such an undertaking is ridiculous.

In addition to Windhorst’s SportsCenter hit, I listened to his “Hope Collective” podcast after Game 5. I’ve actually been a subscriber to the show for a long time – it’s often an enjoyable and informative listen.

But there was the “checkbook winning” argument again. And with a little more time to expand, the subtext was clear that Windhorst thought Wiggins—who had 26 points and 13 rebounds in Game 5—was a luxury other teams couldn’t afford.

We are more than embarrassing now. This must be some kind of practical joke.

When the Warriors traded for Wiggins, the consensus was that he had the worst contract in the NBA.

The Warriors only traded for him because they determined internally that, no, there was actually a worse contract — it was the one they’d just given D’Angelo Russell in a sign-and-trade with the Brooklyn Nets for Kevin Durant.

Wiggins was perceived as such an overpaid disappointment that the Timberwolves threw a first round pick into the deal to make it happen.

And now Wiggins is a luxury?

The revisionist history is laughable.

They drafted three of those players and awarded them for their three championships and now six NBA Finals trips with associated contracts.

The other ‘max’ contract – Wiggins – only applies to the team because the NBA and the players’ union refused to smooth over the league’s salary cap in the summer of 2016, leaving a spike of about $20 for each team. million in the limit.

The Warriors could have used that money to re-sign Harrison Barnes to a big deal, but instead they convinced Durant to come to the Bay.

When Durant left, rather than make that paycheck box disappear, the Warriors chose to fill it with Russell, work out a deal with the Nets and the player—even throw in a draft pick—to take their four maximum places in the post-Durant era. They had big plans for the last spot but ended up with Wiggins, who has become an impactful two-way player.

Each of the Warriors’ maximum players is essentially a homegrown product. Wiggins wasn’t drafted by the Dubs, but he didn’t play anything like that when he first showed up in San Francisco.

The Warriors’ success wasn’t bought, it was built.

And building is expensive in San Francisco.

The Warriors know because they fund these payroll expenses with the money they make in Chase Center, the arena that the Warriors’ ownership group built—with their own money—in the City.

The Warriors are now making hand-over-hand money in Chase Center and this playoff success has likely hit more than nine figures.

If the Warriors operate in the red, it’s only because they’re investing in other things to expand their empire. Otherwise, this is a self-sustaining hoop venture – as long as the Dubs win. And the profits go to court.

Nothing stops other teams from doing the exact same thing.

I understand that not every NBA owner makes money, but that’s not the Warriors’ problem.

It’s also not the Warriors’ problem if other owners don’t want to spend what it takes to win.

For example, the Celtics made a few trades last February in an effort to evade the luxury tax. Boston wanted to improve its team this winter, yes, but it seemed like the organization had the highest priority to keep costs down.

It makes no sense to be cheap. There’s even less in making the rich the bad guy. There are no casualties under NBA ownership.

If you can’t keep up, have it paid out.

That said, the idea that the Warriors are just paying for wins is also comical.

Yes, on Monday, Golden State started with four ‘max’ players, but they also had a minimum value contract player in the starting lineup, Otto Porter. (NBA rules allow teams to add as many players to such deals as they want, regardless of their cap situation.)

They closed Game 5 with Kevon Looney – a center they’ve signed twice with cheaper-than-expected deals because major markets never opened up for him – and Gary Payton II, who was knocked out and available at the end of training camp. was for everyone in the league to sign. He is also on a minimum deal.

The Warriors have four minimum value players in their 10-man rotation, while Nemanja Bjelica and Andre Iguodala also make the league minimum.

Are those players also a luxury?

What’s the maximum you can spend on a team to make a title completely legit, Brian?

It’s all so ridiculous, because not long ago the Warriors were undoubtedly the laughing stock of the NBA.

Twelve years ago tomorrow, Lacob and his company bought the Dubs for a record $450 million. An overrun? At that point, yes.

But the new owners were lucky: they inherited Curry, then in his second year.

Just over a decade later, the franchise is estimated to be worth $6 billion.

Was that appreciation increase an accident or a byproduct of skill?

Next season, the Warriors’ payroll could well exceed its original $450 million investment.

After all, they have some very good players on their team that deserve a raise.

While the other owners shamefully advocate poverty and ESPN reporters try to undermine the Warriors, they are putting their money where their mouth is.