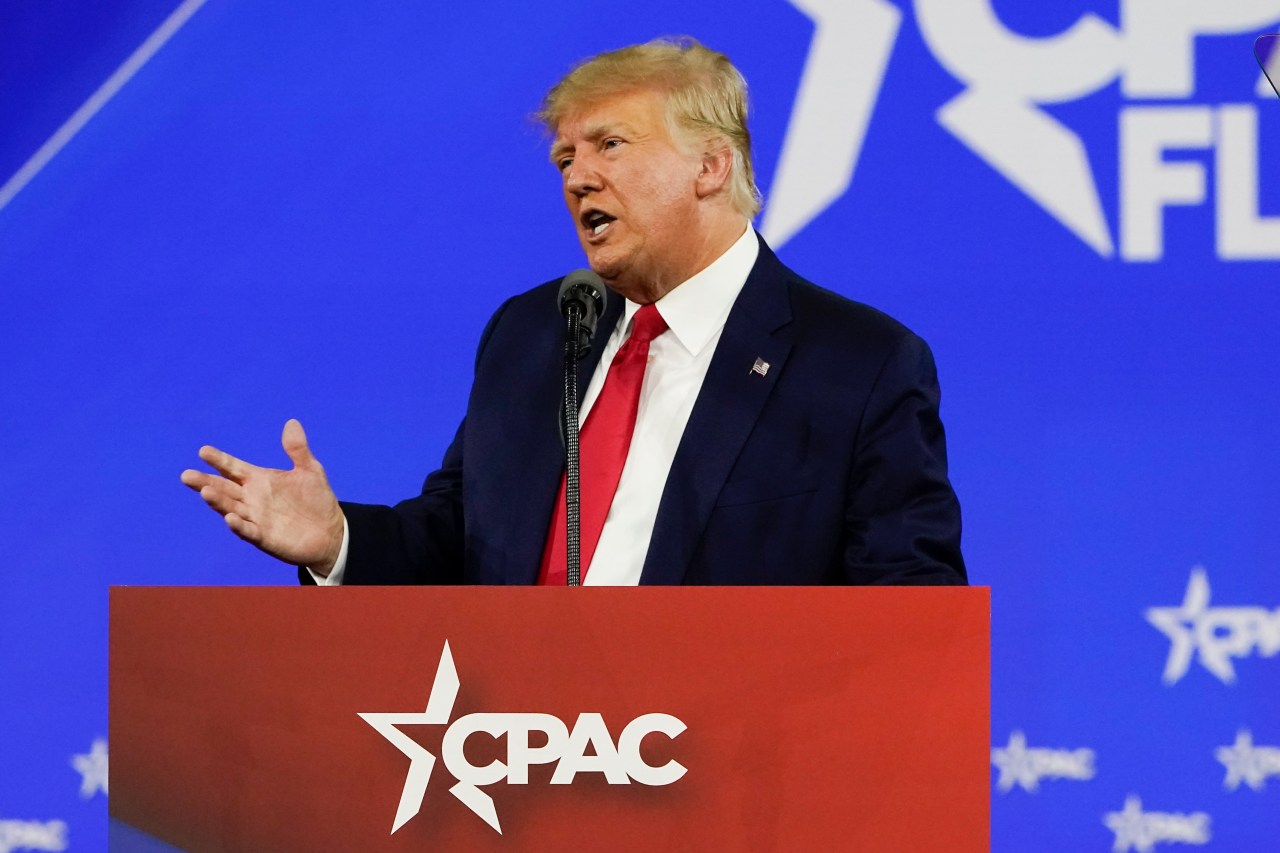 ORLANDO, Fla. (AP) — Leading Republicans spent much of three days avoiding Donald Trump’s chief grievances or ignoring him altogether as they unified behind a midterm message designed to win back the voters the polarizing former president alienated while in office.

Facing thousands of cheering activists at the Conservative Political Action Conference’s annual meeting, Trump falsely blamed his 2020 election loss on widespread voter fraud, for which there is no evidence. As Russian troops advanced on the Ukrainian capital in an invasion widely condemned by Western leaders, Trump described Russian President Vladimir Putin as “smart.”

“Of course he’s smart,” Trump said, doubling down on praise of the Russian leader that many other Republicans have avoided in the wake of the invasion. “But the real problem is our leaders are dumb. dumb. So dumb.”

While Trump expressed support for the Ukrainian people and called the country’s president, Volodymyr Zelenskyy, a “brave man,” he also noted his ties with other leading autocrats. He specifically pointed to his friendly relationships with Xi Jinping of China and North Korean leader Kim Jong Un.

Trump then left no doubt he is the most powerful voice in Republican politics by indicating he will run for president a third time in 2024. “We did it twice, and we’ll do it again,” Trump said. “We’re going to be doing it again, a third time.”

Up until Trump’s appearance, lies about election fraud, the focus of last year’s conference, had been an afterthought among the top speakers. No one parrots Trump’s approving rhetoric toward Putin. And some leading Republicans didn’t even mention Trump’s name.

Instead, those most likely to seek the GOP’s 2024 presidential nomination not named Trump united behind an agenda that includes more parental control of schools, opposition to pandemic-related mandates and a fierce rejection of “woke” culture. The message from more than a half-dozen elected officials, delivered to thousands of mostly white activists at an event that usually celebrates far-right rhetoric, does not mean the party has turned its back on Trumpism.

Far from it. The former president was a frequent topic among some of the conference’s lower-profile speakers. T-shirts proclaiming “Trump won” were being sold in the hallways. And Trump is expected to be announced the overwhelming winner of CPAC’s 2024 presidential preference straw poll on Sunday.

Still, conference organizer Matt Schlapp, the chair of the American Conservative Union, noted that Trump does not have an absolute lock on his party’s base.

Some US governors calling for removal of Russian vodka, products

He pointed to Florida Gov. Ron DeSantis, in particular, who was a crowd favorite throughout the first three days of the four-day conference. Audience members applauded almost every time DeSantis’ name was referenced or his picture appeared on big screens.

“Trump looms large,” Schlapp said in an interview. “No. 1, Does he run again? And it’s overwhelming that people want him to. But there’s a diversity of opinion.”

And while Trump’s most controversial supporters were generally given lower-profile speaking slots over the four-day program, they were not excluded. Rep. Majorie Taylor Greene, R-Ga., appeared on a Saturday morning panel hours after being featured at a conference of pro-Trump white nationalists.

Trump offered Taylor Greene a particularly warm shoutout during his speech as he ticked down the Republican officials in attendance.

Are we suffering alert overload?

“I refuse to shut up,” Taylor Greene said earlier in the day during a brief appearance as she railed against “Democrat communists.”

Despite Trump’s dominant place at the head of the Republican Party, other party leaders are increasingly optimistic they have found a forward-looking strategy to overcome pro-Trump extremism and expand the party’s appeal with control of Congress at stake in November.

It’s essentially the same playbook that Virginia’s Republican Gov. Glenn Youngkin used last fall when he won in the swing state by avoiding Trump and his biggest grievances, including the false notion that the 2020 presidential election was plagued by mass voter fraud.

“There are people that perhaps have never voted the same way any of you have in a presidential race and they’re really angry,” Florida Sen. Marco Rubio said Friday. “And that’s why I believe that for all the negative we’ve heard, the pendulum is swinging.”

Democrats are clinging to paper-thin majorities in the House and Senate, and voter sentiment has swung in an ominous direction for them since President Joe Biden took office in January 2021. In an AP-NORC poll conducted Feb. 18-21, 70% of Americans said the country was headed in the wrong direction. As few as 44% said the same in April 2021.

Some leading Republicans seemed intent at CPAC on not helping Democrats by embracing Trump.

Missouri Sen. Josh Hawley, who tried to block the certification of Biden’s electoral victory after the Jan. 6 Capitol attack, sidestepped a question about whether he would challenge Trump in a 2024 prospective matchup.

“I’ve said I’m not planning to run for president,” Hawley said. He also declined to say whether he wants Trump to run again in 2024: “I never give him advice, including on this.”

Hawley also said it was a mistake for Republicans like Trump to offer soft praise for Putin. “Putin is our enemy. Let’s be clear about that,” Hawley said.

DeSantis, who has also refused to rule out a 2024 presidential bid should Trump run, did not mention the former president in his 20-minute address, focusing instead on his resistance to mask and vaccine mandates.

Trump’s former secretary of state, Mike Pompeo, spoke about his work in the Trump administration, but he did not repeat his own recent flattering comments about Putin, in which he called the Russian leader “very capable” and said he has “enormous respect for him.”

South Dakota Gov. Kristi Noem, considered a potential running mate for Trump in 2024, talked about the 2016 presidential election and the unsubstantiated allegations that Democrats in power “spied” on the Trump campaign. But she pivoted quickly to the future.

“We have some fantastic fighters, like President Donald Trump. But he’s not alone. The American people are on our side,” Menm said.