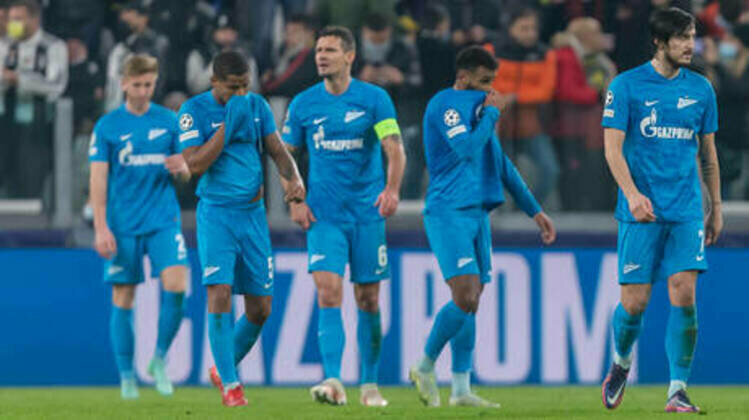 Russia has been hit by a host of new sanctions by European football association UEFA, which will isolate the country from continental football in the 2022/23 season.

The measures, announced Monday, follow the bans on all Russian teams imposed by UEFA and FIFA at the end of February, when the conflict with Ukraine was still in its early stages.

This time, the UEFA Executive Committee’s anti-Russian rulings are timed and will span the entire next season in various competitions – from the Champions League to futsal.

We look at the key details of the new bans imposed on Russia, what they mean for football in the province and how Russian figures have reacted.

What are the new UEFA sanctions against Russia?

At the international level, the Russian men’s team will not participate in the UEFA Nations League, where they should have played Iceland, Israel and Albania in League B, Group 2, in a campaign that kicks off in June. Instead, Russia will automatically finish at the bottom of the group and be relegated to League C for the next Nations League cycle (should the ban be lifted by then).

The Russian women’s team has been officially removed from the Euro 2022 tournament in England this summer and will be replaced by Portugal – the country they had beaten in the play-offs to reach the competition.

In addition, the Russian women’s team will not be able to continue their qualifying campaign for the 2023 FIFA Women’s World Cup, effectively banning them from the tournament to be held in Australia and New Zealand next year.

At youth level, Russia will not be allowed to continue its qualifying campaign for the 2023 European Under-21 Men’s Championship. They will also be banned from under-17 and under-19 European competitions for men and women.

At club level, Russian teams will be banned from the major UEFA competitions, the Champions League, the Europa League and the Europa Conference League next season.

This season, Russian champions Zenit St. Petersburg had appeared in the Champions League group stage, while Spartak Moscow and Lokomotiv Moscow had participated in the Europa League group stage (the former reached the last 16 before being kicked out of the competition).

Russian clubs have also been banned from participating in the UEFA Women’s Champions League next season, while Russian youngsters are banned from the UEFA Youth League.

Which other competitions are subject to UEFA bans?

Russian clubs are banned from participating in the 2022/23 UEFA Futsal Champions League for men.

Russia has also been removed from the 2022/23 UEFA Regions’ Cup, a football competition for amateur teams across the continent.

What do the bans mean for other countries?

It would be incorrect to currently describe Russia as a European football powerhouse, although the removal of its national teams and clubs nevertheless reduces the level of competition for rivals.

Russia’s scheduled opponents in the UEFA Nations League – Iceland, Albania and Israel – will play fewer matches in a group Russia was expected to win to recoup promotion to League A of the competition.

The spot in the UEFA Champions League group stage, which automatically goes to the title winners of Russia – who is Zenit again this season – is now handed over to the Scottish champions, who looks like he is Celtic.

Russia’s ‘coefficient’ points in the UEFA club rankings will be pegged at a minimum level, meaning Russia will inevitably fall from the European table. That will have a knock-on effect on the number of future seats allocated to Russian teams in UEFA competitions. (Sports.ru predicts that Russia could drop from 10th to 19th in the table — below those of Norway, Switzerland and Denmark.)

In some UEFA competitions, Russia is considered a real powerhouse. The team won silver at the recent European Men’s Indoor Football Championship, but will be banned from participating in tournaments next season.

“If leading teams like Portugal and Spain lose such a strong competitor, European futsal will only lose to this,” said the president of the Russian Futsal Union, Emil Aliev.

What about the Russian bid for the European Championship?

†we are open and ready, we must not be closed for UEFA and FIFA… There is a lot of time, the situation will change, we will study everything.”

However, UEFA announced on Monday that Russian bids for both tournaments had been rejected, citing rules stating that: “Each bidder must ensure that it does not act in a manner that interferes with UEFA, the UEFA Final or UEFA Final Stage, any other bidder (or any employee, officer or representative of any of the foregoing), the bidding process or European football discredit.”

UEFA also noted that “insecurity” about when the ban on Russian teams would be lifted.

How has Russia reacted to the new UEFA bans?

Leading up to Monday’s announcement, Russian media reports had stated that new sanctions were imminent, meaning the news was not entirely unexpected. Nevertheless, some had hoped for better developments based on the words of UEFA president Aleksander Ceferin, who recently said the organization must show that sanctions are not aimed at Russian athletes or the Russian people.

The RFU responded to Monday’s announcement by its “categorical disagreement” with the actions of UEFA. “The RFU will continue to protect its interests in the cases already pending before the Court of Arbitration for Sport in Lausanne, and reserves the right to make new applications,” read a statement.

Russian national coach Valeri Karpin said the developments were not surprising. “The lawlessness with the removal of Russian football from competitions that started a few months ago continues. At the same time, I still hope that the RFU will be able to defend the right of our players to participate in international tournaments in the relevant courts to defend, “ Karpin told Championat.

Elsewhere, discussions arose as to whether Russia would be better off turning its back on UEFA and seeking accession to the Asian Football Confederation (AFC). Former president of Lokomotiv Moscow, Ilya Gerkus, said an eastern pivot would bring numerous benefits, although honorary president Vyacheslav Koloskov said it would send a signal to the “dead” of Russian football.

Member of the State Duma Sports Committee Dmitry Svishchev said: “Our football authorities need to think about the development of leagues and infrastructure in the country, as well as the possibility of moving to the Asian confederation.”

Former Russia international Denis Glushakov said the country should postpone its ban and try to find the positives, such as returning to a spring-fall schedule for domestic competitions and expanding the Russian Premier League to 18 teams. The midfielder suggested that young Russian talent would have a chance to develop in the absence of foreign players, dozens of whom have left Russian clubs in recent weeks.

Does Russia have any hope of overturning UEFA bans?

As the RFU noted in its statement, Russia is challenging its FIFA and UEFA suspensions in the Court of Arbitration for Sport (CAS) in Switzerland. The court has so far ruled in favor of UEFA and FIFA, depriving Russia of its chance to participate in the European qualifying play-offs for the 2022 World Cup.

However, CAS has yet to make a final decision and the organization told TASS on Monday that arbitration proceedings are underway.

“The parties exchange written views, arbitrators are appointed. After the committee’s composition has been approved, it will be determined whether and, if so, when. is announced,” according to the CAS press service.

UEFA’s statement on Monday added that the executive committee “stay on standby to convene further meetings to reassess the legal and factual situation as it develops and make further decisions as necessary.”