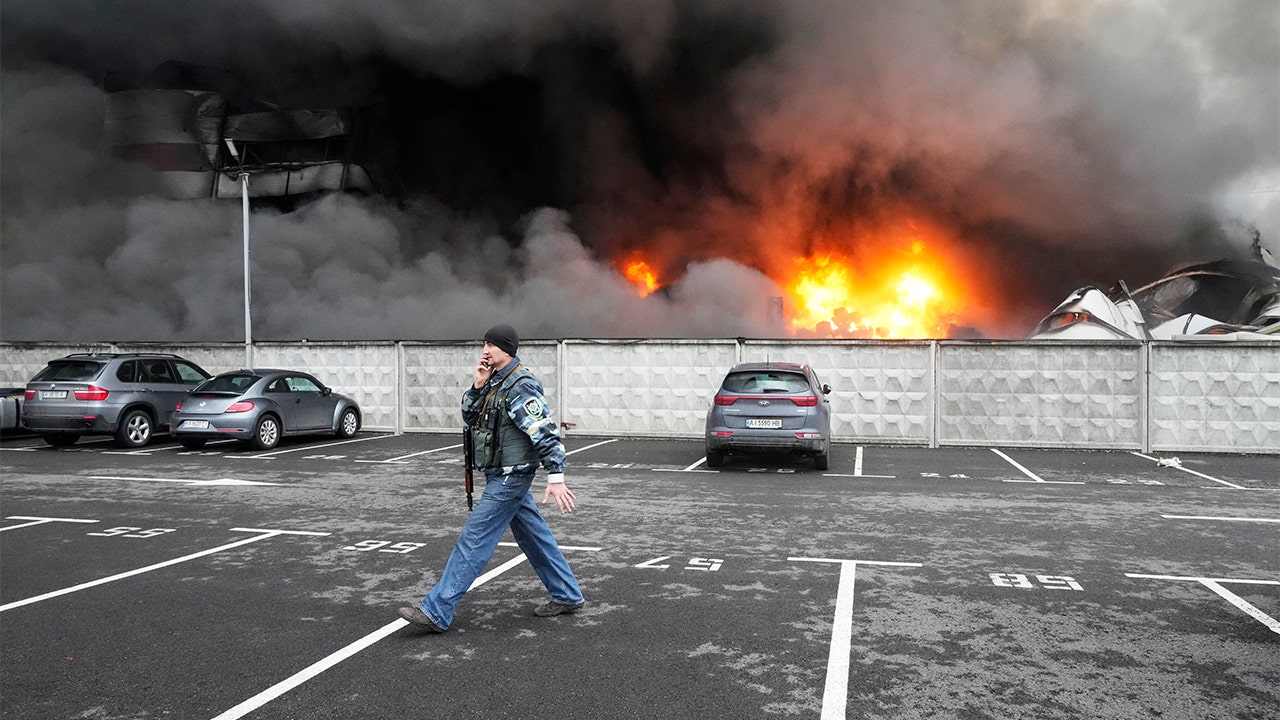 The Biden administration is requesting at least $10 billion in new money to provide aid to Ukraine amid Russian President Vladimir Putin’s war against the nation, according to the Office of Management and Budget (OMB).

“As part of the agreement lawmakers are working to finalize ahead of the March 11th deadline, we’re also urging Congress to include supplemental funding for two urgent and immediate needs: supporting Ukraine, and continuing our ongoing COVID response efforts,” OMB Acting Director Shalanda Young said Thursday.

A Ukrainian serviceman walks past as fire and smoke rises over a damaged logistic center after shelling in Kyiv, Ukraine, Thursday, March 3, 2022.
(AP Photo/Efrem Lukatsky)

“The United States has provided over $1.4 billion in assistance to Ukraine since 2021, and, together with our European allies and partners, we are holding Russia accountable for its unjustified and unprovoked invasion,” Young added. “To continue this important work and further support the Ukrainian people, we are requesting $10 billion to deliver additional humanitarian, security, and economic assistance in Ukraine and the neighboring region in the coming days and weeks.”

The Biden administration’s request comes as Ukraine faces increasingly heavy bombings and missile attacks from Russia. Meanwhile, Russian warships are headed toward Odesa for what US officials anticipate will be an amphibious assault beginning as soon as Thursday.

Congressional leaders are pushing hard to pass the full omnibus in the coming days – but it’s not yet clear they will be able to.

“I’m very concerned,” Sen. Dick Durbin, D-Ill., said Wednesday. “It’s time for us to… get this done. I cannot imagine at this moment of history, with Ukrainians facing what they’re facing and our allies so anxious to make sure that we’re on board, that we are delaying this any longer . We’ve got to move on this and the sooner the better.”

Senate Majority Leader Chuck Schumer, DN.Y., waits to speak during an event to mark one year since the US Capitol insurrection on Capitol Hill in Washington, Jan. 6, 2022. Schumer said this week that Congress “must” pass the omnibus bill next week and include additional funding for Ukraine. (AP Photo/Susan Walsh, Pool)
(AP Photo/Susan Walsh, Pool)

Senate Majority Leader Chuck Schumer, DN.Y., also said the Senate “must” pass Ukraine aid, and “the quickest way we can assure that aid reaches Ukraine is through the omnibus, which needs to get done next week.”

The Biden administration is also asking for a further $22.5 billion in coronavirus-related aid, Young said Thursday. That money will go toward treatments, vaccines and virus tests.

The Ukraine money is likely to have bipartisan support. But Republicans may resist allowing any further coronavirus money to pass Congress. They’ve indicated the Biden administration would have to provide highly-compelling evidence that the money is needed to get their votes on any such funds.