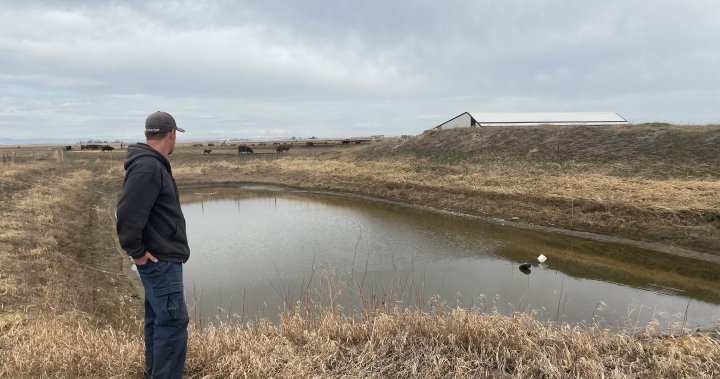 Troy Bischler began to panic. The farmer from Granum, Alta., was in the midst of calving season with 180 pairs of cows and was running out of water.

“Maybe we have another week in the dugout. After that, there’s really no plan B anymore,” Bischler told Global News on April 27. “Either that water is coming through the canal and starting to fill the dugout, or I don’t know. We cannot move these cattle to another water source halfway through the calving season. It will not work.”

Bischler grows in a part of southern Alberta where there is not much rainfall. Farming activities supporting over 200,000 acres of land and 750,000 head of livestock depend on irrigation provided by the Lethbridge Northern Irrigation District. The water is diverted from the Old Man River through a canal port in the Piikani Nation Reserve.

On April 12, the leadership of the Piikani Nation ordered that the gate be closed.

“The river is very important to the Piikani Nation,” said Piikani Nation Councilman, Riel Houle. “We understand the downstream effects of farmers and other people who need access to the water, but (we) are also very protective of our river. It is sacred to us.”

Houle says the act of defiance was carefully considered. Twenty years after the signing of a water rights agreement between the Piikani and the federal and provincial governments, much has changed, Houle says. First, the diversion dam on Piikani land is aging and planning for new infrastructure is underway.

“The province wants to come and build a new (weir) and the Piikani Nation wants to be a part of that because it’s a big project that it’s happening on our land.”

After five years of writing to the province about environmental and economic concerns, turning off the tap was a last-ditch effort to get the government’s attention. And it worked. Two weeks after the gate was closed, the water level on farms dropped dangerously low. The province has signed an agreement with the Piikani and promises to work together on the water problem in the future.

“The Piikani need to be at the table to ensure that any work we do on the weir or any infrastructure system protects the environment in the long term,” Alberta’s Secretary of the Environment and Parks Jason Nixon said the day after the agreement. to Global News. was signed.

2:18
Do we need to change the Canadian Charter of Rights and Freedoms 40 years later?

Do we need to change the Canadian Charter of Rights and Freedoms 40 years later? – April 17, 2022

The canal gate was reopened on Tuesday evening.

“We’re finally moving in the right direction, but to be honest, it took until the (eleventh) hour for them to come talk to the Piikani Nation and we weren’t happy about that,” Houle said.

“From an Indigenous point of view, this is a source of much of their frustration; if we get kicked out, if it’s a problem for our communities, nothing happens, but if it’s a problem for the non-indigenous community, it becomes a matter of crisis or urgency,” he said. So this is a very good example of the long-term and even contemporary effects of not resolving these historic disputes.”

Despite the hundreds of disputes between First Nations and groups and governments across Canada, Coates says infrastructure-disrupting protests are exceedingly rare. In most cases, he says, indigenous groups take these battles to court, where they often win.

“Then the question becomes ‘why don’t we solve them faster?’ The answer is simple, that until recently there was a lot of interest in $100 million settlements, $150 million settlements with First Nations people. If you look closely all over Canada, there have been a slew of settlements in the last six to eight months.”

Coates attributes this change to procedural changes made by former Attorney General Jody Wilson-Raybould – the first Indigenous woman to hold the cabinet position.

“She has worked very hard to speed up the settlement process to get through the hassle of going through multiple levels of courts and finding negotiated mediated settlements. The government of Canada has now said, ‘Yeah, let’s get these things off the table.’”

Jason Nixon says reconciliation is also a priority for the Alberta government.

“We will continue to work very hard with the Piikani on a long-term partnership on many of the issues they have raised. It aligns with our government’s overall vision of working with First Nation communities and ensuring that we can share long-term prosperity together.”