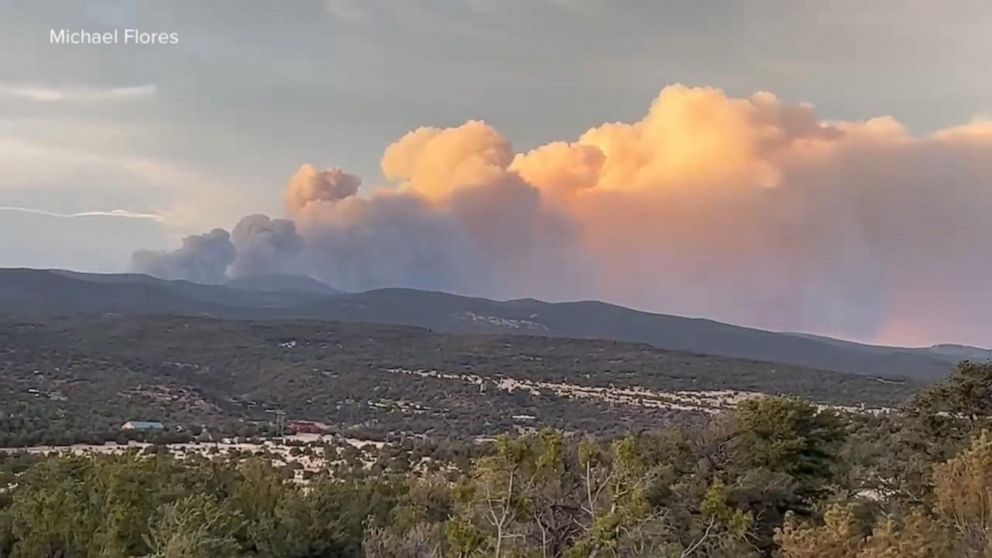 The largest wildfire in the United States was on its way to mountain resorts in northern New Mexico on Wednesday, prompting officials to issue a new series of warnings for more people to prepare for evacuation as the fast-moving fire gains strength. .

Fire officials said the conflagration raced slopes and along exposed ridge lines, sending embers into the air carried by gusts of wind in front of the fire. After growing more than 130 square miles in a single day, the fire has now charred more than 370 square miles (958 square kilometers) of tinder-dry forest since it started last month.

Two more days of windy and dangerously bone-dry conditions are forecast before winds are expected to ease on Friday. Winds have often made it too dangerous for planes to dump water on the fire and slow the advance through extremely dry Ponderosa pine forests in the Rocky Mountain foothills.

“This is a serious firefighting business here,” Fire Chief Dave Bales said in a briefing. “That is not easy, especially with the fuels that were in it, with the Ponderosaden, mixed conifer, even down to the grass. If we can’t fly planes, if we can’t get people on the very edge of the fire, if it’s hovering over us, that’s a big concern for us.”

Crews were especially concerned about the possibility of the massive fire spreading further north to small villages in the Rincon Mountains and rural towns, including the ski and open-air resort communities of Angel Fire and Taos.

Firefighters worked overnight to protect buildings around the towns of Mora and Holman, where Highway 518 north to Taos was closed due to smoke and fire hazards. Authorities stressed there was no immediate threat to communities near Taos, but new evacuation warnings were issued for some locations.

“As we get to Taos, Black Lake, Angel Fire, there’s a possibility that with the models we’re using, those areas will see fire,” Todd Abel, chief of fire operations, said Tuesday evening.

Crews have attempted to direct flames around homes on the north and south sides of the fire by bulldozing firebreaks, setting up sprinklers, clearing trees and raking pine needles. More than 1,800 firefighters and support personnel were deployed in the blaze.

A federal disaster has already been declared over the fire, which is partly the result of a preemptive fire that escaped the containment after it was set up in early April to clear shrubbery and small trees so they couldn’t fuel wildfires. That fire mixed with another wildfire a few weeks later.