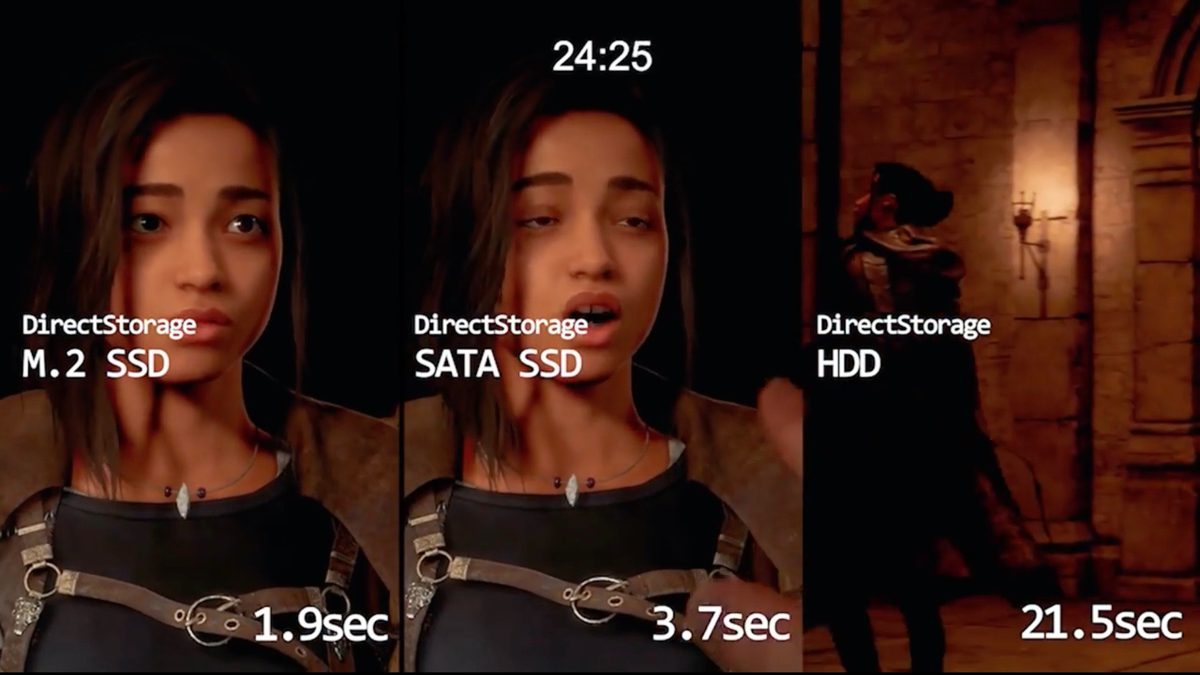 How good is Microsoft’s DirectStorage at reducing PC game load times? For one game, the technology cut load times to around 2 seconds or less.

At the Game Developers Conference on Wednesday, the studio behind the upcoming action-RPG title Forspoken demoed its game running Microsoft’s DirectStorage technology.

The benchmarks show DirectStorage can load event cutscenes in 1.9 or 2.2 seconds over a PC’s NVME SSD storage drive. Playable levels will load up in 1.7 or 1.9 seconds. Benchmarks for a playable level that required loading 4.2GB of data.

“By using DirectStorage with M.2 SSD, you can start playing almost with no loading time,” said Teppei Ono, technical director for Luminous Productions, the developer of Forspoken.

That said, it’s not exactly a huge improvement over existing storage APIs if your PC already has a NVME SSD or SATA SSD drive. As you can see in the benchmarks, DirectStorage only shaved load times by a few deciseconds when compared against a standard Win32 API. Benchmarks for a cutscene that required loading around 5GB of data. Benchmarks for a playable level that required loading 3.5GB of data.

According to the demo, the DirectStorage API also did little to cut down the loading times for playable game scenes when the PC had an HDD drive. “HDDs, on the other hand, are not delivering the anticipated result due to hardware performance limitations,” Ono said. 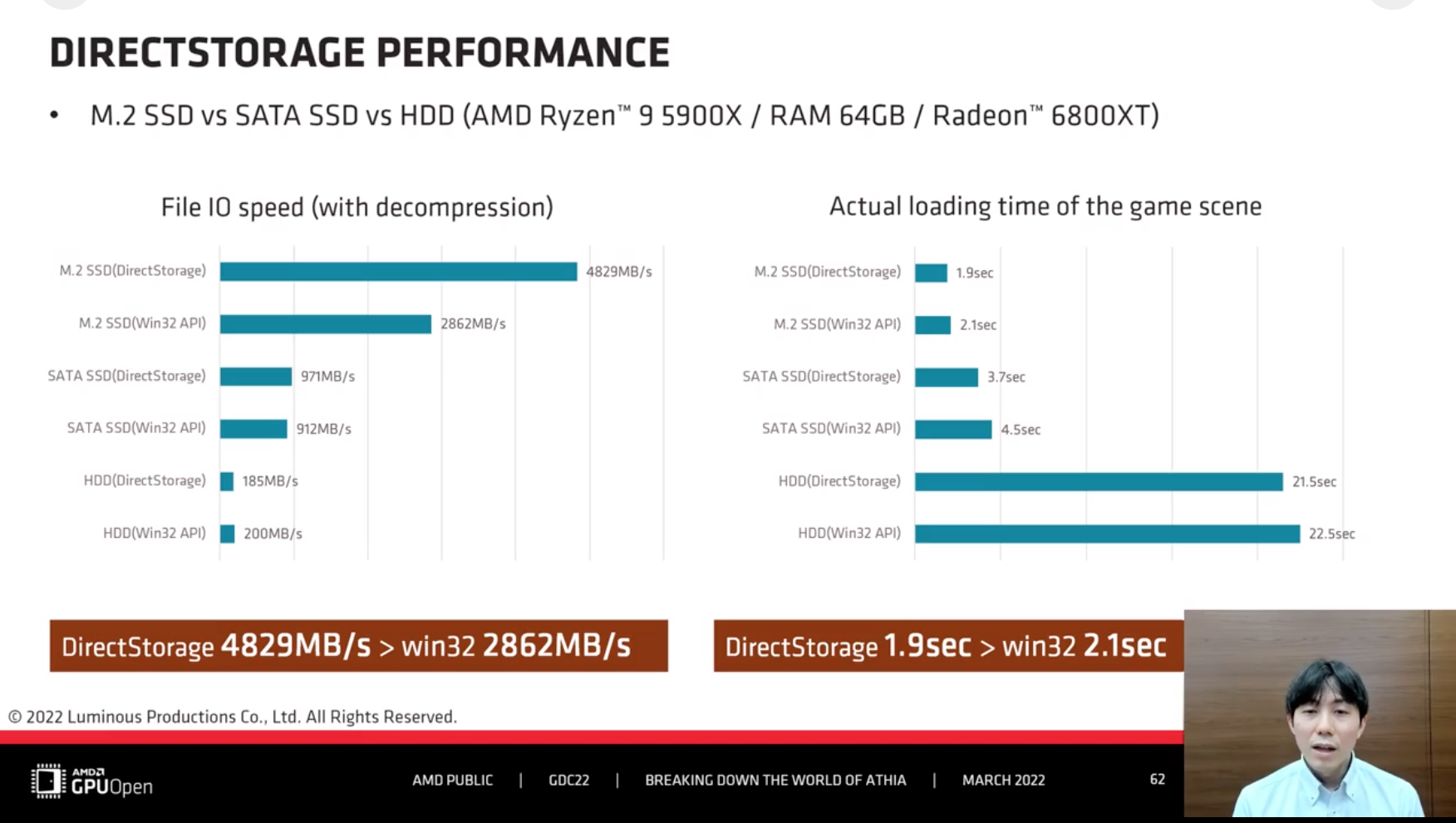 Still, the DirectStorage API promises to be a boon for PC gaming. A graph from Luminous Productions’ presentation says current games can take more than 10 seconds to load while using an M.2 NVME or SATA SSD. But by tapping DirectStorage, that drops to single digits on Forspoken. 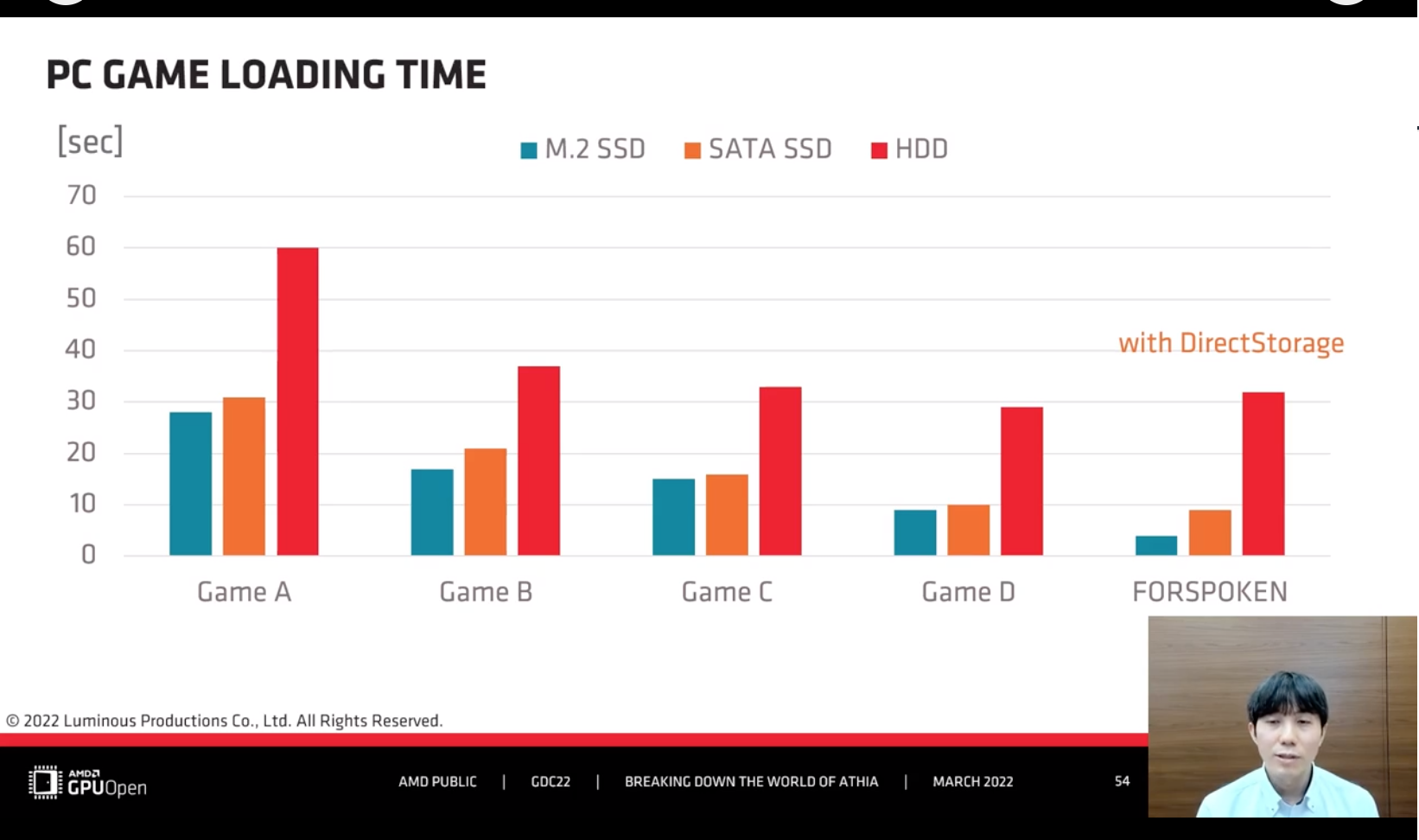 In addition, the presentation noted one-second load times are possible through DirectStorage, but achieving them requires further optimization of in-game assets. “However, there are so many file types of assets in the game that optimizing them all takes time and effort,” Ono said.

DirectStorage works by fully leveraging the faster speeds from NVME SSD drives to streamline the data processing for a game. Existing storage APIs require the game data requests to be individually processed one by one. “DirectStorage, on the other hand, allows you to use multiple queues, enabling loading and decompression to be executed in parallel,” Ono said.

While DirectStorage doesn’t fully eliminate the load times, Ono noted the technology is still a work in progress. Future versions will be able to accelerate the load times even more by storing the game’s GPU data on the graphics cards’ memory without going through any CPU processes.

But for now, the current version of DirectStorage doesn’t support GPU decompression. “This implementation, however, still outperforms existing Win32 APIs,” he said.

Last week, Microsoft launched the DirectStorage API, meaning any game developer can begin incorporating it. So barring any issues, the technology should become standard across Windows-based PC gaming. Microsoft adds that DirectStorage works best with Windows 11, but it should also offer load-time improvements for games on Windows 10.